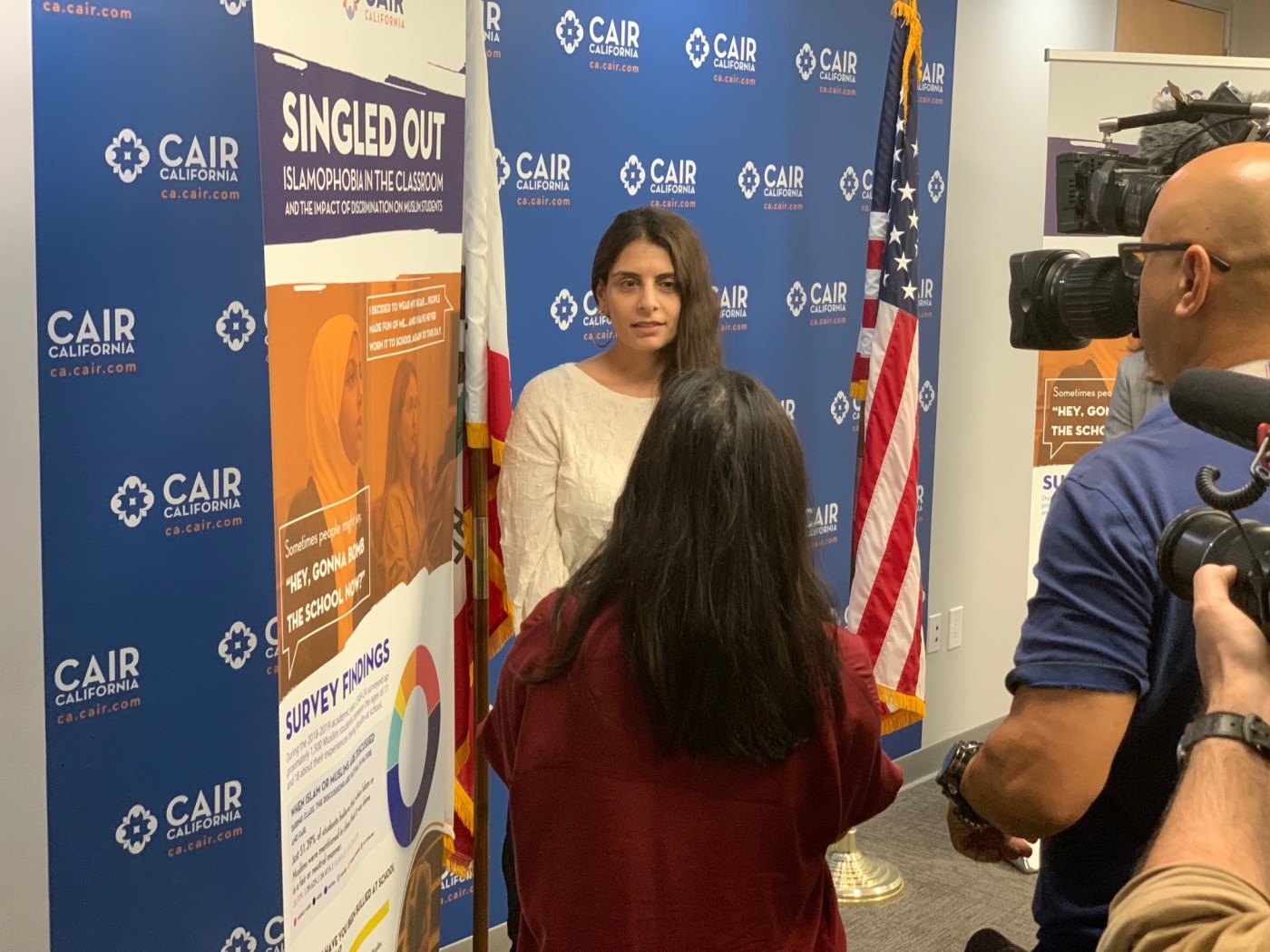 Ahlam Elabed’s son has been called a “terrorist,” mocked and humiliated at Redlands High School because he is Muslim, she said.

Her son’s classmates mocked him with chants of “Allahu Akbar” and pulled his pants down in PE class, Elabed said, speaking Wednesday, Oct. 16, at the Council for American-Islamic Relations’ (CAIR) Anaheim office.

CAIR’s California chapter released its biennial report on bullying of Muslim students on campus, which showed that Elabed’s son was not alone. The report, “Singled Out: Islamophobia in the Classroom and the Impact of Discrimination on Muslim Students,” said 40% of 1,500 Muslim students between the ages of 11 and 18 surveyed statewide said they had been bullied on campus.

The rate of bullying on campus of Muslim students dropped this year compared to the advocacy group’s 2017 report — from 53% to 40%. While that is encouraging, 40% is still twice the national statistic for students being bullied at school, said Patricia Shnell, senior civil rights attorney for CAIR-LA and lead editor of the report.

But, she said, the numbers from this year’s report show that nearly one in three Muslim students does not feel safe, welcomed, and respected at school. Also, this year only 72% of respondents reported feeling comfortable letting others know that they are Muslim, which is a decrease of 5% from the previous report, Shnell said.

She credited the decrease in the bullying rate to state laws such as the “Bullying Bill” (Assembly Bill 2291) in 2018, which requires schools to offer annual training to teachers and counselors to create a safe learning environment for Muslim, LGBTQ+, immigrant and other vulnerable student populations who may be subject to bullying.

However, the increasing protections in state legislation must also be reflected at the federal level, Shnell said.

Shnell, who works with Southern California Muslim families such as Elabed’s who come to CAIR-LA for help, said bullying has an emotional impact not just on the children who experience it, but also on their families.

“They feel helpless,” she said. “Parents lose faith in their schools and districts as the bullying continues. I’ve had students move districts or change schools. Some consider homeschooling or moving their child to an Islamic private school. It’s very hard on the entire family.”

On-campus bullying has been back in the spotlight, particularly in Moreno Valley, where 13-year-old Diego Stolz died as a result of injuries suffered in an on-campus assault at Landmark Middle School. Three boys attacked him causing Diego to fall to the ground and hit his head, officials said. A second incident was reported this week on Monday, Oct. 14, in which a girl at Landmark was assaulted during lunch by two other girls who were eventually booked into Riverside County Juvenile Hall on suspicion of battery.

Elabed said she contacted CAIR-LA after her son was physically assaulted in class after being told earlier this year by Redlands High School officials that the bullies had been told to leave her son alone. In May, one of the boys who circulated offensive Photoshopped images of her son pushed him in class, breaking his collarbone and dislocating his shoulder, Elabed said.

“I was horrified that the lack of appropriate response from the school had further harmed my son,” she said, getting emotional. “We felt lost and victimized.”

Redlands Unified School District officials declined to comment Wednesday, citing federal laws that require school districts to protect the privacy of students and families in such cases. The district issued a statement saying it takes all bullying allegations seriously.

“Any complaint that the District receives is thoroughly investigated,” the statement reads in part. “Appropriate action is taken when a complaint is founded because we do not tolerate or condone bullying in any form. We are working together to talk about this issue and educate our students on the harmful impacts of bullying and how to end bullying.”

Elabed said CAIR-LA has helped her file a complaint with the school district, which is currently investigating the incident. But, she said, she has received little sympathy from school administrators, even as her son underwent two surgeries for his injuries. Her son still attends the school despite being “paranoid and picked on.”

He is still undergoing treatment and might have to go through physical therapy, Elabed said.

“I don’t want to move him to another school because if I do that, it would seem like this is his fault, and it isn’t.”