Previous Next
5 Questions with Richard Polk, president of Pedestrian Corp. 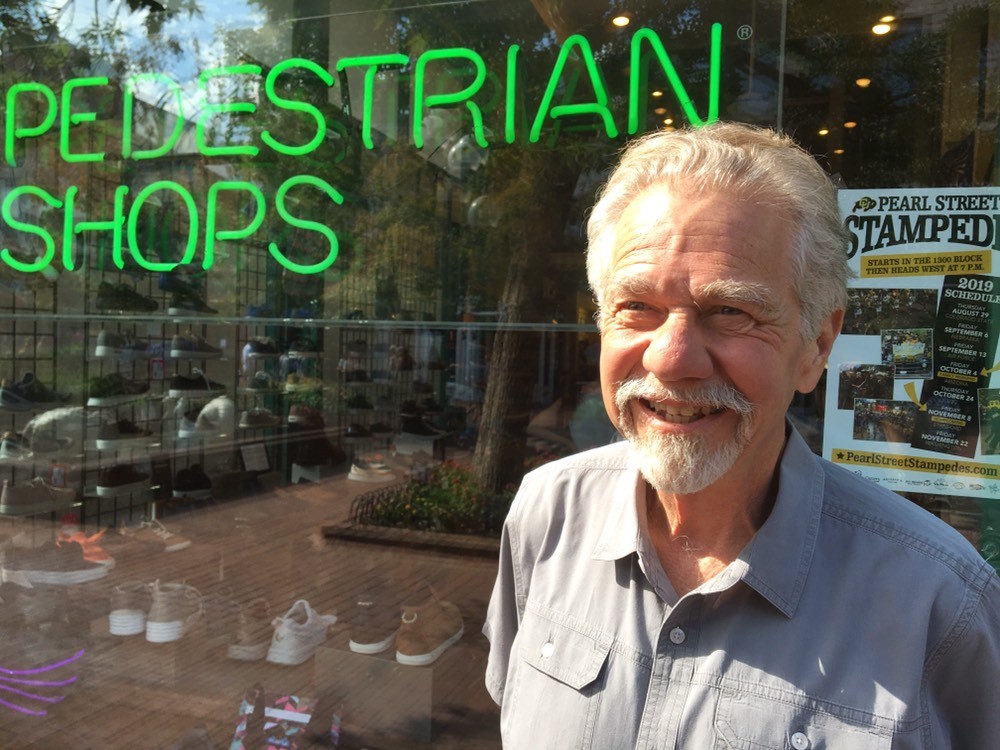 Longtime Boulder businessman Richard Polk says the secret to the success he’s had selling shoes for about 50 years is combining fashion, mobility and comfort.

His ability to provide the right kind of comfortable shoes to customers since he started peddling his wares with a friend, Tony Chirikos, from the back of a pickup helped him grow his business to multiple locations in Boulder and Denver.

Polk came from a Chicago business family that owned a chain of appliance stores, but he wanted to be on his own from a young age, he said. He came to study accounting in Denver, and saw an opportunity in Kelso Earth Shoes, a Danish brand known for its unusual ergonomic design. It was a year after the famous “Summer of Love”, Polk said. “We began telling people, ‘Life is short, longer if you walk.’”

In August 1971, Polk and Chirikos opened a brick-and-mortar store at 1334 Pearl St. Polk remembers borrowing money to set up the Earth Shoe Store, and paying about $330 a month in rent for the space. “The store was very modest with displays cut from tree trunks by a nice man named John Cox who ran a fire wood business on east Pearl,” Polk reminisced. The window display was full of Earth shoes and donated plants.

“We embraced environmental sustainability. If it’s is green, it’s good for people economically,” he said.

When the manufacturer of Earth Shoes went bust, Polk and his partner broadened their inventory and renamed the store Pedestrian Shop, (which after incorporation became Pedestrian Shops in 1977). The business moved to its current location at 1425 Pearl St. in 1992. Chirikos sold his interest to Polk in the early ’90s.

Promoting social good also has been part of Polk’s business philosophy. The store has helped raise funds for several community organizations through charitable donations and also collected 50,000 pairs of reusable footwear for people in need through its shoe-drives. Polk, who was a Boulder city councilman from 2005 to 2007, said helping the community also is good for both the Earth and business. During his tenure on the council, he helped write and approve Boulder’s first Climate Action Plan and proposed Boulder’s Solar Rebate ordinance.

In 2008, Pedestrian Shops in downtown installed a 10 kilowatt solar panel array on a leased roof of a nearby building. It provides clean energy to the building, and also takes care of the store’s power needs. It prevents 28,000 pounds of carbon dioxide emissions a year from entering the atmosphere, Polk said.

His business is now largely run by his two daughters, Lauren Polk Brown and Zoe Polk.

We recently spoke with Polk at his downtown store to learn more about his business of selling shoes.

The following interview has been edited for length and clarity.

1. What’s with the name Pedestrian Shops?

Polk: Walking is about mobility. It really sets you free. Shoes gave me the opportunity to connect with people: to walk and talk with people. Pedestrian Shops was one of the first retailers in the country to evangelize walking as a common denominator. Walking is carbon-free.

2. How do you select the footwear you sell at Pedestrian Shops?

Polk: We got into the shoe business to do more than just make money. We wanted to help make our community better, and our focus always was on comfort. We attended trade shows, developed relationships with reps and often relied on intuition to make decisions about selecting and stocking different types of footwear. My daughters do the same, and also keep an eye on what’s going in the world.

It was intuition that led Pedestrian Shops to become the first shoe store in the country to sell Crocs in 2002. It became a huge success.

I haven’t tried every pair of footwear we carry in the store. Shoes are subjective.

3.  What helped Crocs become so successful?

Polk: Crocs are colorful and comfortable and cost less. It’s twice the fun. Customers simply love them. We have sold about 100,000 pairs of Crocs since 2002.

4. What do your daughters bring to the business you started?

Polk: My daughters bring in a lot of energy, enthusiasm and commitment to continue my legacy of providing top-notch customer service, and sharing and contributing to the community values I cherish. Lauren joined the business in 2006 and Zoe did the same in 2013.

Both my daughters are smart. They bring different strengths. Zoe has big ideas, and Lauren has great analytical skills. They work beautifully together.

5. You have been on Pearl Street even before the Mall was built. How has it changed over the years?

Pearl Street is more upscale now. Businesses, even those from abroad, want to locate here. At the same time, it’s more challenging, which motivates people to do their best in terms of providing products and services. The only way to make it on Pearl Street is to be excellent.