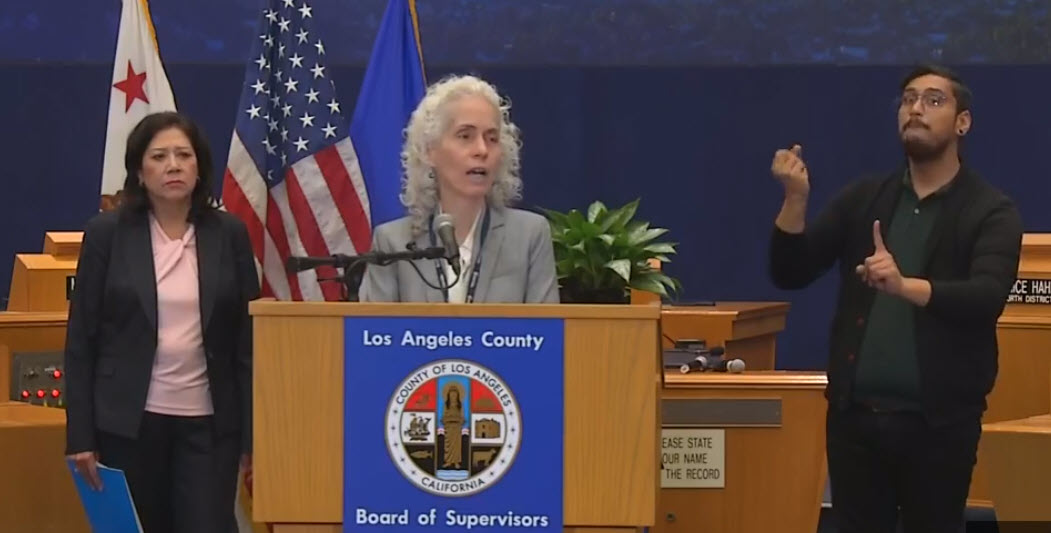 Nine more people in Los Angeles County have died as a result of the novel coronavirus, public health officials reported on Thursday, March 26. A total of 21 people in LA County have lost their lives from COVID-19, the disease that results from the coronavirus.

Ferrer declined to offer any more details about the individuals who died or where they resided because some of the immediate family have not been reached yet, she said.

The county also announced 421 new cases Thursday putting the total number of confirmed cases at 1,216 people, a near doubling in 48 hours.

The latest figures show just what health officials said they feared for weeks, that the growing number of cases will increase exponentially and Los Angeles could face a surge at area hospitals like that seen in China, Italy and New York currently.

“If we don’t curtail that spread within a few weeks there could be a million people affected,” Ferrer said. “If 20% need some sort of hospital care, you can see why we need people helping to slow the spread. That would be 200,000 people who need to be hospitalized.”

As of Thursday, the county had 208 open intensive care unit beds in the entire county, according Dr. Christina Ghaly, director of health services. There are also about 1,500 other hospital beds available, and Ghaly said all hospitals had the ability to accommodate surge capacity.

As for ventilators, Ghaly said area hospitals had 830 ventilators with a few hundred more being delivered.

On Wednesday, public health officials sent a message to providers instructing them to preserve personal protective equipment and reuse whatever they could because of limited supplies. A disconcerting message for some given that hospitals have yet to experience the surge that’s been so anticipated. Ghaly on Thursday said there was no immediate shortage of gear but they were being proactive.

“The stockpile has been distributed,” she said. “All hospitals should be following the CDC guidelines for reuse of personal protective equipment.”

The county adjusted its death toll slightly from previous reports. Officials on Wednesday pulled back on linking the death of a Lancaster juvenile to the coronavirus saying the U.S. Centers for Disease Control was now investigating the case. Another previously reported death was a resident who lived in another county.

“Reporting these deaths is the worst day for us at DPH, but it cannot compare to the deep loss for the family and friends,” Ferrer said.

One of the deaths could possibly be that of Joe Radisich, Sr., a legendary football coach at Mary Star of the Sea High School in San Pedro who died Wednesday night, March 25, after testing positive for the novel coronavirus, according to his son. He was 84.

It was unclear if Radisich’s death was included in the number of confirmed deaths related to COVID-19 put out by the county. Based on the most recent list of cases, San Pedro accounted for two confirmed cases.

Radisich’s son, longshoreman and former Los Angeles Harbor Commissioner Joe Radisich, Jr., said his father  became ill about a week ago and already was battling a number of other health problems.

Also on Thursday, Ferrer said the steep increase in recent days was primarily attributed to increase in testing capacity and catching up with a backlog of tests. LA County continued to expand testing capacity, having now opened several locations with drive-thru testing. But those slots are only available by appointment only through a web portal at corona-virus.la. So far, 9,400 people have been tested in LA County with 10% of them coming up positive.

Out of 1,216 confirmed, 41 cases were attributed to Long Beach, and nine cases in Pasadena. Long Beach also had 1 death. Both cities operate their own health departments so numbers have been delayed getting to LA County officials.

Ferrer also said the county was monitoring 14 institutional settings including nursing homes where the coronavirus has been identified in a patient or staff member. One of those includes The Kensington, an assisted living facility in Redondo Beach where at least three people have tested positive for COVID-19 and others were awaiting tests.

While ambulances, fire trucks and paramedics have arrived at The Kensington this week, a facility spokeswoman referred media requests to the Los Angeles County Department of Health, which in turn did not answer specific questions.

On Wednesday, Hermosa Beach took action on its own to close its beaches and Strand. Because the city owns the beaches there and not the county as in most places, it could make such a move. All other LA County beaches remained open Thursday, though and public officials have cautioned more sternly against gathering at the beach or other outdoor locations.

The arrival on Friday of the USNS Mercy from San Diego into the Port of Los Angeles promises to offer much-needed relief to area hospitals by housing patients who currently at hospitals for other needs.

The county also on Wednesday issued a new directive to the public saying that for anyone who’s been tested or presumed positive to stay home for seven days. The patient can only leave their home after the seven day quarantine if they haven’t shown symptoms for 72 hours.

As of March 26, Riverside County has confirmed 107 cases, including 8 deaths. Orange County, as of March 25, had 187 cases and a single death. Close to 2,500 people had been tested in the county far and 57 instances of community transmission. San Bernardino County had 54 cases and two deaths.

California Department of Health, as of March 25, confirmed 2,535 cases, not including Grand Princess, and 53 deaths. More than 700 were community acquired. Nationally, the U.S> Centers for Disease Control has reported 68,440 total US cases, 994 deaths as of Wednesday. And globally, the World Health Organization as of Wednesday confirmed 413,467 cases and 18,433 deaths.