Previous Next
‘A place of contemplation and comfort,’ Thousand Oaks officials unveil memorial for Borderline mass shooting victims and survivors 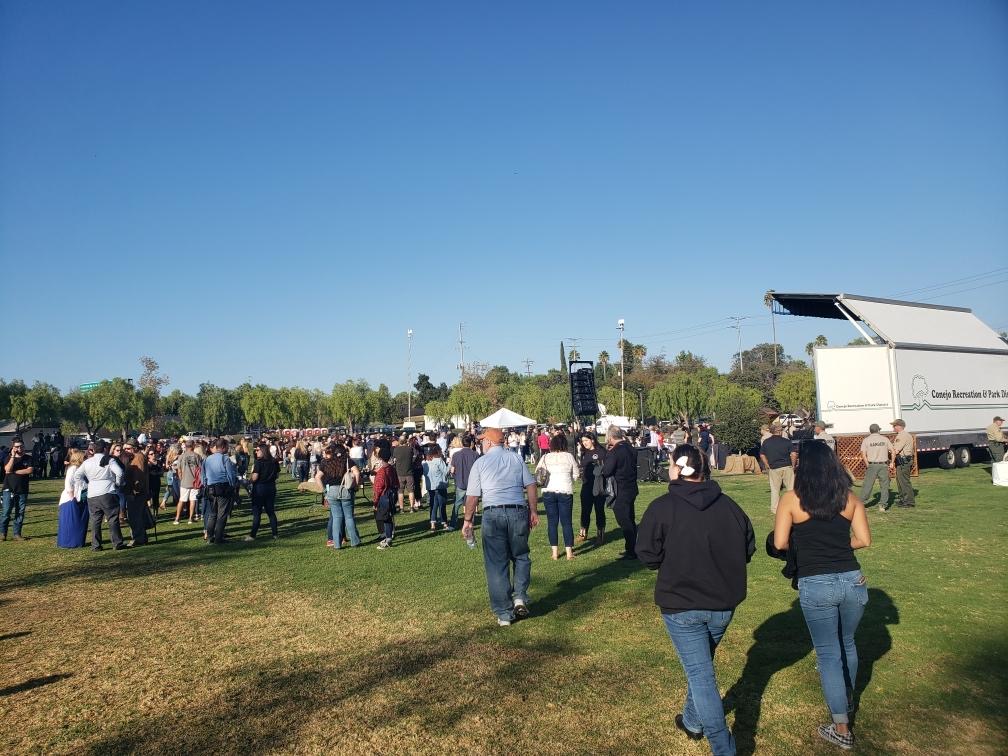 On the one-year anniversary of the deadly mass shooting at the Borderline Bar & Grill, hundreds gathered Thursday for the unveiling of a memorial inside a Thousand Oaks park.

Known as a Healing Garden, the memorial was constructed in the heart of Conejo Creek North Park. It is meant to both honor the victims of the Nov. 7, 2018 shooting, and provide a place for survivors, victims’ families, and members of the community grieve and process the tragedy.

“I hope this will be a place of contemplation and comfort, for many years to come,” said former Thousand Oaks Mayor Andy Fox who held office during the shooting.

During the ceremony, a pair of planes flew low over the park as the Cal Lutheran Kingsmen Quartet sang the Star-Spangled Banner. Later, Paige Peel, a country musician, performed “Our Home,” which she sung softly over the music of an acoustic guitar: “On the borderline of heaven, where we never thought this would happen … this is our home.”

To close the program, relatives of the 12, many in tears, read the names of their loved ones. Afterward, white doves were released as Carly Bracco, a Broadway and theater actor, sang “Amazing Grace.” Attendees began to mingle on the lawn, some embracing, laughing and crying.

Prior to the public unveiling, city officials led a private ceremony for survivors and relatives of the victims at the garden.

Janna Nogy, 51, said her daughter, Ashlee, 21, was among the hundreds that fled the gunman’s bullets. She has struggled with PTSD throughout the past year.

“She can’t get Borderline out of her head,” the survivors’ mother said.

Nogy praised a speech Thousand Oaks Mayor Rob McCoy shared with Survivors earlier about channeling the trauma they lived through. “It might never go away, but it’s what you do with it moving forward,” she said.

The public ceremony also drew people who lost friends in the shooting.

Matt Markowitz, 47, of Newbury Park , was a friend of Justin Meeks and Sean Adler who were killed by gunfire in the bar. He wore a T-shirt with “Enough” printed in yellow.

“If you have a mental issue that might predispose you to violence, you should not have a gun,” Markowitz said.

Others brought their fond memories made at the Borderline bar, which has remained closed since the shooting. Bri Medeiros, 32, of Thousand Oaks said she met her best friend at the bar. On what proved to be a difficult day for many, Medeiros wanted to feel close to her community.

“I’m here to be surrounded by our community,” she said.

Construction of the park began after the city of Thousand Oaks approved a $250,000 grant agreement with the Conejo Recreation and Park District to construct the garden.

Officials took flowers placed by mourners at an impromptu memorial in front of the Borderline bar earlier this year, ground them into compost and used them to nurture the soil of the garden. Attendees of the ceremony were invited to take home saplings provided by the parks district to start their own healing gardens

The centerpieces of the garden are 12 granite benches, each weighing more than two tons, and an oak tree that was brought into the park.

“Granite is a very strong and dense stone, so the project symbolizes the strength of the community this per year,” said Andrew Mooney, senior park planner and landscape architect at the park district.

Officials lauded the solidarity of the community throughout the ceremony.

Mayor Rob McCoy said there were more than $4 million in donations and countless messages shared with families of victims and survivors. He noted that none of those people asked to have their names commemorated at the park, keeping the names of the 12 who lost their lives at the center.

“They will remember the 12, but they will also remember a community that never stopped loving,” McCoy said.