State Rep. Angie Nixon is running for a new seat in House District 13 after redistricting and her campaign is spotlighting a contrast with her opponent, which she describes as a “DeSantis sidekick.”

A new mail piece describes Nixon as “our defender” against Gov. Ron DeSantis with an illustration of the legislator flexing her bicep while dressed in a Superman-style outfit.

If Nixon is the superhero in the narrative, opponent Delaine Smith is the villain.

“A radical, anti-woman, anti-LGBT, Trump Supreme Court supporter, Smith will side with DeSantis and Republicans to destroy our basic rights. Delaine Smith wants to police who we love and how we manage out health by ending abortion with no exceptions,” the mailer contends.

The claims here are presented alongside social media posts suggesting Smith is out of step with the mainstream of the Democratic Party.

“I do not support the LBGT movement,” reads one.

“This Democrat is praying for her,” Smith said at the time.

Nixon currently represents House District 14. She has roughly $50,000 on hand in her campaign account.

She won election in 2020, defeating former state Rep. Kim Daniels, who is attempting a comeback of her own, in HD 14. Nixon had backing from around the state as she toppled Daniels, a minister and a conservative Democrat, in the Primary that year.

Smith, a realtor who has served as a real estate investigator for the state of Florida, has said she is “good friends” with Daniels. When she launched in June, she said she wanted a “positive campaign.” Thus far, the self-styled “prophetess” has not mounted much of a campaign.

Smith has received just $450 in donations. She has loaned her campaign $12,000. Her only spending so far was the $1,781.83 qualifying fee to the Division of Elections.

A No Party Affiliation candidate has qualified for the ballot, closing this Primary, which means only Democrats can vote. This would seem to benefit Nixon over her opponent. In 2018, an open Primary in this district saw former Rep. Daniels defeat a Democratic challenger on the strength of votes outside the party. 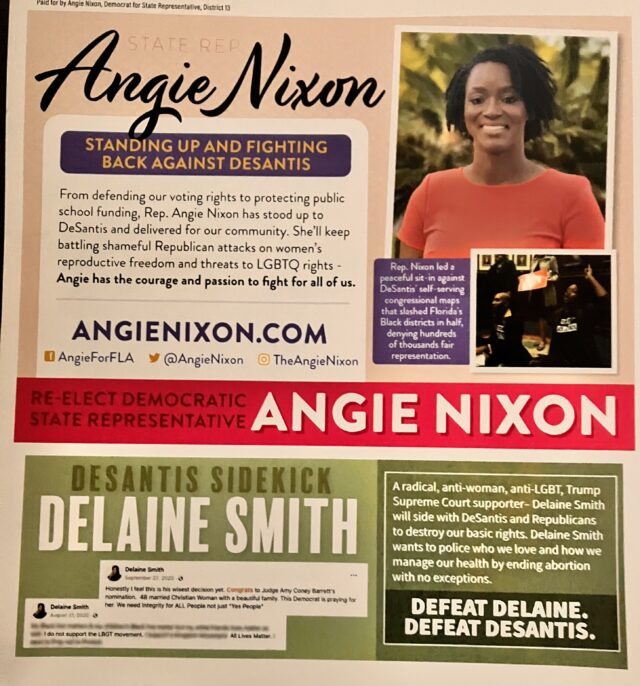