Annette Taddeo blasts Gov. DeSantis for ‘cruel’ migrant relocation plan, which she questioned back in January

One day after Republican Gov. Ron DeSantis followed through on a plan to ship undocumented migrants from Florida to progressive states with “sanctuary” policies, Democratic state Sen. Annette Taddeo of Miami is reminding those outraged that she raised concern about it months ago.

Taddeo’s campaign for Congress on Thursday sent out a reminder that she’d asked back in January about what, at the time, was an $8 million budget request for the relocation plan. The GOP-controlled Legislature ultimately raised that sum to $12 million, some of which covered the cost of sending two planes with about 50 migrants, including children, to Martha’s Vineyard on DeSantis’ birthday Wednesday.

“After last night’s news, Republicans can never again claim they stand with the victims of communism,” Taddeo said in a statement. “To take advantage of people fleeing oppressive regimes and use them as political pawns to score cheap points with their Fox News audience and the extreme fringes of their party is cruel and inhumane.”

Eagle explained at the time that the program was meant to handle “illegal immigrants (who) are being shipped across the country as they come in from the southern border.” The Legislature banned sanctuary cities in Florida in 2019, he said, and the funds would enable Florida “to be flexible in figuring out how to abide by the rule of law, and we would then ship those immigrants to states that would further welcome them.”

Taddeo asked whether that would include children. Eagle indicated it would but said details of the plan weren’t yet solidified.

Shortly after, Taddeo sent a letter to Chris Spencer, DeSantis’ director of policy and budget, asking for the research data Eagle said the administration used to reach the $8 million amount.

Where’d this $8 MILLION for the “illegal immigration program” in Gov DeSantis’ proposed ‘22 state budget come from? How’d they come to this number, & what is it for exactly? I’ve sent a letter to the office of the Governor’s Policy Director @ChrisSpencerFL to find out just that! https://t.co/sE9iIy7AQn pic.twitter.com/q52IQueXj0

Spencer responded more than a week later with a one-page summary of the plan that included little additional information and none of the research data Taddeo requested. 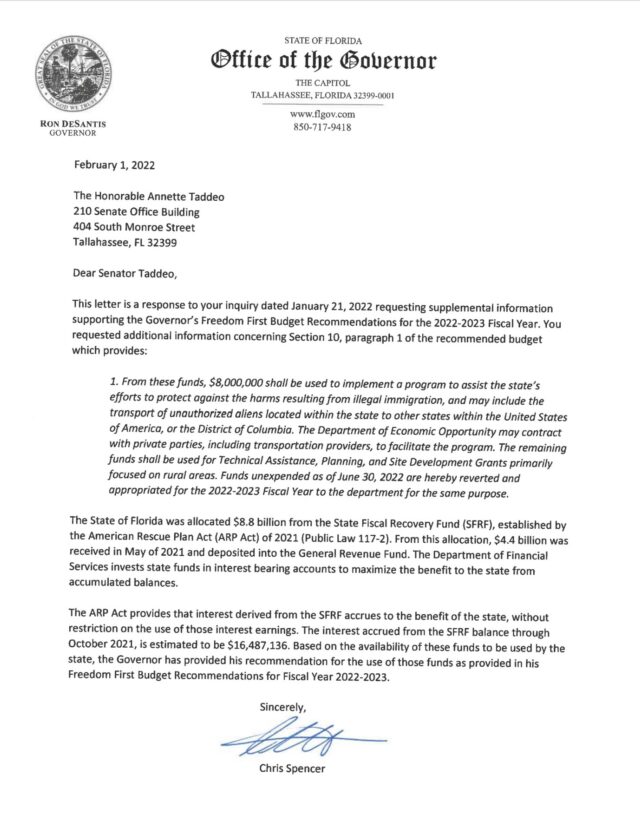 DeSantis, Lt. Gov. Jeanette Nuñez and others Florida GOP members have courted the votes of immigrants in state, particularly those of Cuban descent, by appealing to and honoring their heritage and struggles while also advocating for policies that would, in many cases, have kept their forebears from remaining in on American soil.

In May, the Governor visited the Freedom Tower in Miami — a historic gateway for many Cubans fleeing Fidel Castro’s regime — to sign a measure requiring the statewide observance of an annual “Victims of Communism Day,” including mandatory public-school lessons on the subject.

He successfully advocated for spending $25 million to refurbish the tower in November. One month before, he joined Nuñez, U.S. Reps. Mario Díaz-Balart, Carlos Giménez, María Elvira Salazar, Education Commissioner Manny Díaz Jr. and Hialeah Mayor Steve Bovo there to call on President Joe Biden to act more decisively against the Cuban regime after protests erupted across the island nation.

“The regime of Cuba is responsible for what’s happening in Nicaragua, Venezuela, what’s about to happen in Peru, what could be happening in Chile, what is happening in Colombia right now, the seeds that are being planted there,” Giménez said at the time.  “(It creates) instability in our own backyard (and) more repressive regimes.”

The Vineyard Gazette reported the migrants who arrived there Wednesday were from Colombia and Venezuela.

While serving in Congress, DeSantis backed several bills meant to constrict immigration, including the Zero Tolerance for Illegal Entry Act of 2018. When he ran for Governor that year, he vowed to restrict illegal entry to the U.S. and ran a campaign ad in which he told his young daughter, who was playing with toy blocks, to “build the wall.”

Speaking before a packed ballroom Sunday during the National Conservatism Convention in Aventura, DeSantis denounced “mass immigration” to a round of applause.

Two days later, DeSantis’ former Press Secretary Christina Pushaw, now a spokesperson for his re-election campaign, told convention attendees states and cities with friendlier policies toward undocumented immigrants are getting what they asked for.

Taddeo, who fled to the U.S. to escape Cuba-funded Marxist terrorists in Colombia at 17, called on Salazar, her Nov. 8 opponent, to speak out against DeSantis’ actions. Though Miami-born, Salazar is the daughter of Cuban exiles. She famously interviewed both Castro and Nicolás Maduro, the disputed President of Venezuela, during her decorated career in journalism.

In February, Salazar unveiled the Dignity Act, a voluminous and ambitious immigration reform package meant to incentivize migrants to register with and pay restitution to the U.S. in exchange for a pathway to residency or citizenship.

“You cannot profess to stand against communism in Cuba and Venezuela and then look the other way as the Governor manipulates and lies to people who have fled these countries and proceeds to use them as political pawns to advance his own political ambitions,” she said. “Shame on you and your party.”