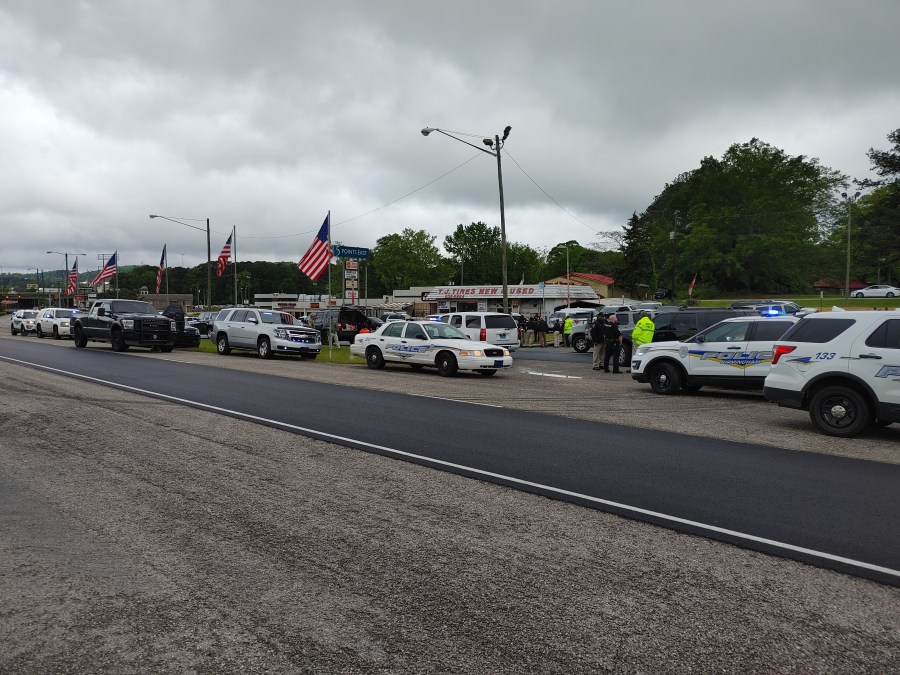 BIRMINGHAM, Ala. (WIAT) — Update (5 p.m): The Birmingham Police Department has confirmed that the suspect was arrested earlier today. The police also have another person of interest in their custody.

Birmingham police believe that the suspect is responsible for a homicide in Auburn, two homicides in Dadeville, and possibly other robberies around Alabama. The suspect is facing multiple counts of murder and attempted murder.

Police were able to track the vehicle the suspect fled from back to a home in the 100 block of Grove Drive. When officers responded to the location, they found a person inside the home unresponsive. Police say this person was a victim of a homicide.

The suspect was injured at the time of his arrest.

Original story: Birmingham police are still searching for a suspect after an officer-involved shooting on Montevallo Road on Friday night.

In a twitter video, public information officer, Sergeant Mauldin, says police were notified of a vehicle out of Auburn at the Econo Lodge in the 7900 Block of Crestwood Boulevard around 11 p.m., Friday night.

Police say upon investigation, they discovered the vehicle was stolen out of Auburn and also involved in a homicide. The suspect was reportedly seen in the area, leading the K9 unit to conduct a search. During the search, they noticed a silver Sudan leaving the perimeter and attempted to do a traffic stop.

During that traffic stop, the suspect exited the vehicle and began firing shots at officers. Gun fire was exchanged and officers lost sight of the suspect. No officers were injured.

Shortly after, police say they searched the area for evidence and came across a residence at the 100 block of Briargrove Drive. Inside the residence, police discovered a gunshot victim who was pronounced dead. The victim has not been identified.

Police have not confirmed that the two incidents are related.

Police are asking the public to “shelter-in-place” and avoid the area as they are actively looking for a suspect near Crestwood Boulevard and Montevallo Road.

#UPDATE: Surveillance photos of murder suspect believed to be armed and dangerous. Suspect is described as a Black male, wearing all black, 6ft 1in or 6ft 2in & weighing 210-220 lbs. Shelter in place remains in effect. Call Crime Stoppers if seen (205) 254-7777. pic.twitter.com/SqrnUqCxcZ

The suspect is considered armed and dangerous.

Both the officer involved shooting and the homicide are ongoing investigations. If you have additional information, contact Crime Stoppers at 205-254-7777.