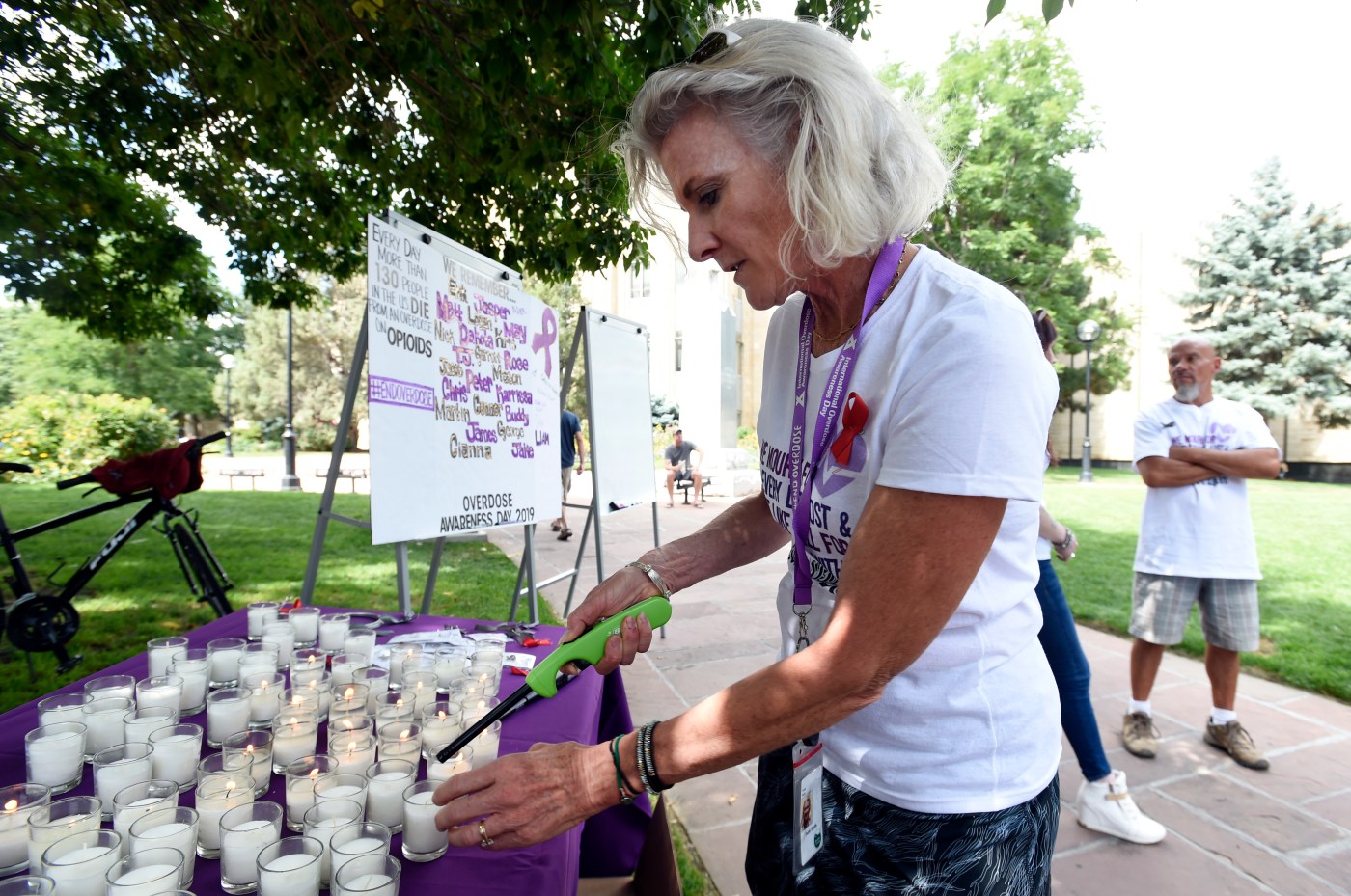 At the height of her addiction, Mila Long felt like a “slave” to heroin.

The drug’s grip was so powerful Long felt she couldn’t stop using, even when she overdosed and was left for dead by a group of users she thought were friends; even when doctors told her her left arm, which had become swollen from drug use, would have to be amputated unless she stopped.

Of all the misconceptions about addiction, Long said perhaps the biggest is the belief that it is a choice.

“Nobody would choose to be addicted,” Long said. “I would not wish that on my worst enemy.”

Long, 22, of Boulder, has since done more than conquer her addiction. Now two years sober, Long is fighting to help others find a path to recovery.

In honor of National Overdose Awareness Day, Long was one of several volunteers who stood on Pearl Street Mall Saturday to share resources for recovery and to educate people passing by.

Those who talked with volunteers could learn how to use naloxone, a nasal spray that blocks the effects of an opioid drug overdose. The medicine, which does not require a prescription, is available at a number of Boulder County pharmacies, which can be found on the county’s website.

Boulder County health organizations and their partners hosted the event. Among them were members of the Substance Use Advisory Group, a Boulder County Public Health referral and resource program comprised of residents, as well as law enforcement and nonprofit partners. The group is dedicated to responding to the opioid epidemic and other illicit drug use. Through the county’s The Works Program people also can get access to clean needles and testing for HIV and hepatitis C.

Trina Faatz, a facilitator for the advisory group, said she hoped the group’s presence on Saturday showed there is a place in Boulder County where people with addiction are embraced and aided on their path to recovery.

“The reason people often don’t seek treatment or end up overdosing alone is because we attach so much stigma and shame to this disease,” Faatz said. “Once we can talk about this freely without attaching shame and stigma, people can openly come out and seek help.”

In Colorado, naloxone has helped to combat 1,122 overdoses since May 2017, according to reporting by Colorado Public Radio. Faatz said that number is only representative of cases reported to emergency dispatchers. Family and friends who use naloxone to save someone, typically don’t report it, she said. Faatz approximated that the number of those saved from naloxone is likely much larger. Naloxone has been available in Boulder County for roughly four to five years.

For Long, sharing her story has helped educate people about drug abuse.

She said her addiction started in high school when she was prescribed opioids to provide relief from chronic pain stemming from an illness.

“I started to misuse and abuse them,” Long said. “It quickly escalated and within a couple of years I was using heroin — that kind of brought things to a whole other level for me.”

A person who abuses opioids can’t just stop using without suffering painful withdrawals, which Long described as “like the flu times 10.” Symptoms vary depending on what a person is withdrawing from, but heroin addicts typically experience diarrhea, vomiting, insomnia, sweating and abdominal cramps, according to the Addiction Center.

When Long reached that point in her addiction, she wasn’t using drugs as a high, but rather to keep the withdrawals at bay.

“I wasn’t living,” she said. “I was surviving. That fear of going through withdrawals is so intense. It becomes an instinct, like an animal instinct. You can’t allow yourself to go through that.”

Throughout her addiction, Long overdosed seven times. She said she has lost at least 25 friends to overdose deaths. A posterboard created for the event Saturday listed names of people who have died from overdoses. Those passing by were welcome to add to it to honor the memory of loved ones they lost.

“We need to inform people more about Narcan,” Long said. “And about the fact that overdose happens — it happens all of the time.”

In September 2017, Long got medical help and also joined support groups that have helped her stick to the path to recovery.

In addition to her volunteer work Saturday, Long is a certified peer recovery coach at the Denver Recovery Group. Long said helping others find recovery has been rewarding. The prospect of reaching others who have experienced the same struggles was her reason for spending a Saturday outside educating people on addiction.

“Now, I’m part of something much bigger which is sharing my story and helping others,” Long said. “If we can reach one person that needed to hear about overdose awareness then it will be the most successful day.”

The Substance Use Advisory Group meets from 9:30 to 11:30 a.m. on the third Wednesday of every month. Details about the location, which alternates, can be found online at bouldercounty.org/families/addiction/substance-use-advisory-group. The meetings are free and open to the public.