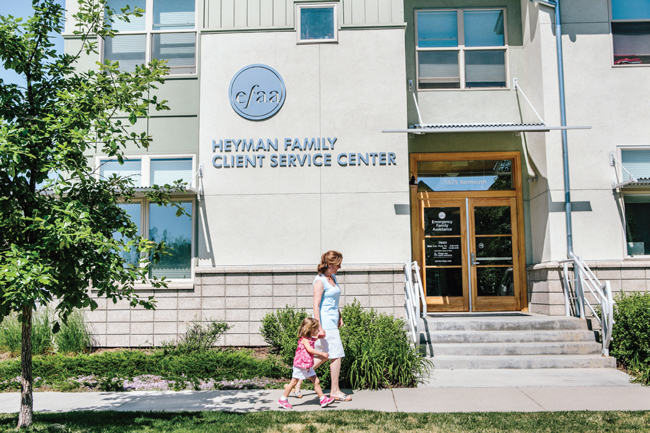 The donation, via the Ned and Nathalie Fund, will be spread over four years, with the initial installment funding summer camp programming, clearing organizational debt and financing long-term strategic planning efforts.

Executive director Julie Van Domelen said she was grateful to the couple.

“They mentioned that number, and I don’t know if I fell out of my chair, but it sure felt like it,” Van Domelen said. “That was the biggest single donation that EFAA has ever gotten.”

The couple, who declined to be named and interviewed, in a written statement said, “We are so happy to be in a position to be able to give back and make a difference. EFAA is a great organization and we trust they will use our gift to best meet the needs of our community.”

EFAA, which celebrated its 100th anniversary last year, serves Boulder County in a variety of ways, including meeting immediate needs for food, shelter and other basic necessities. The organization operates short-term and transitional housing for families in crisis, provides case management and offers various programs. It is “not only linking people up with resources and opportunities but really helping them build a path toward a better future,” Van Domelen said.

The first installment of the donation will expand the organization’s summer camp scholarship program for low-income children. EFAA also combined a portion of the money with money from reserves to pay off the remaining mortgage on one of its apartment buildings — eliminating $50,000 in mortgage payments.

The money also will fund the five-year strategic planning process launched this week.

“We’ll do a scan of the community and see if there are gaps we should consider, but we really see this as a consolidation of EFAA, rather than a departure,” Van Domelen said of the strategic planning.

She said the organization gets funding from city and county contracts and grants, but donors are the largest source of funding.

“Individual donations are our biggest funding source,” she said. “It’s a testament to EFAA’s trajectory in the community.”