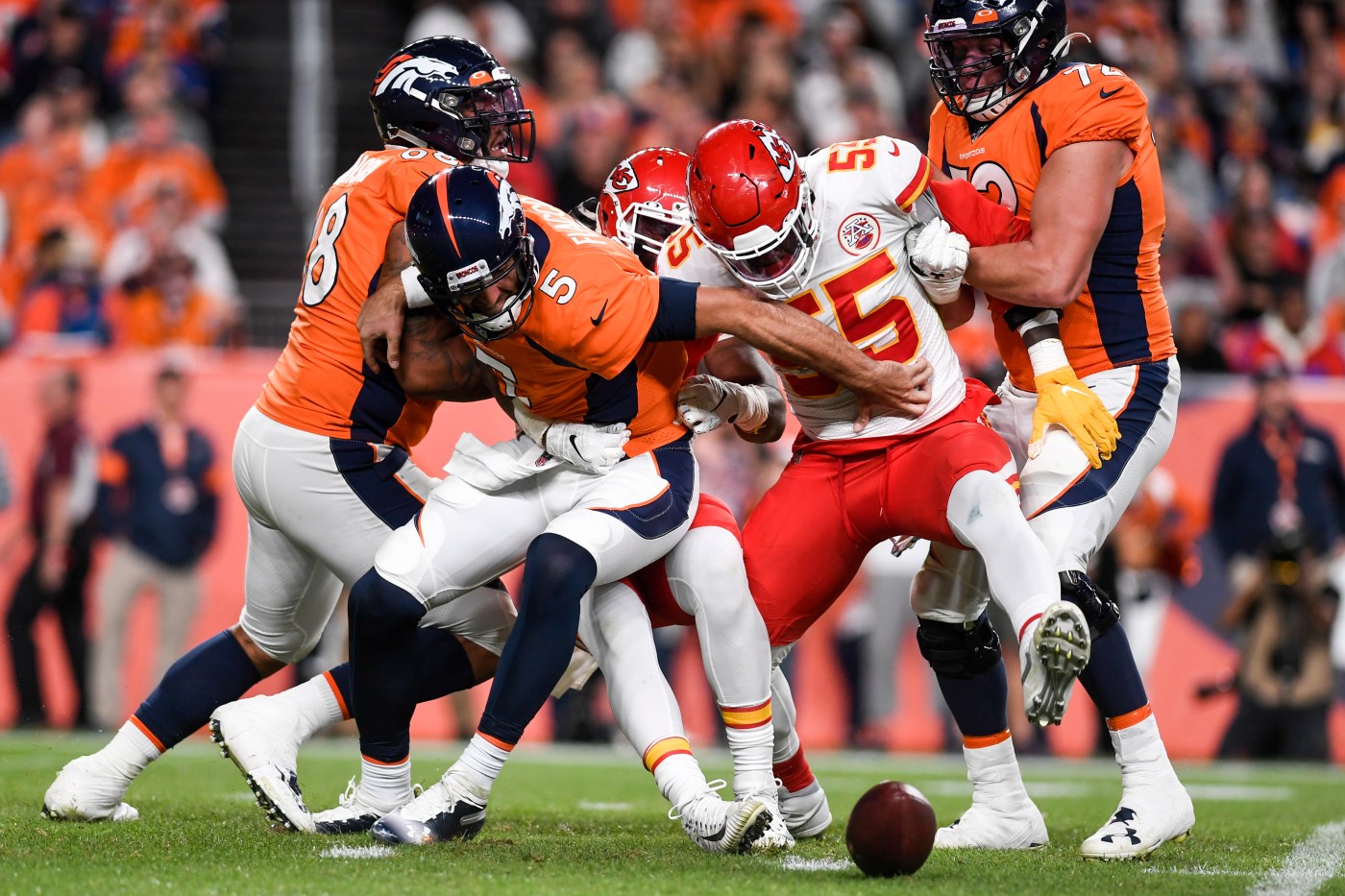 All week long, the national narrative was that the Chiefs’ defensive front was soft, and ripe to be pushed around.

But Kansas City came out on Thursday at Mile High and put that ugly onus on the Broncos’ offensive line instead. Denver’s front was bruised, battered and embarrassed all night, yielding nine sacks while the home team only mustered 71 yards rushing.

“It was all levels of our pass protection that were a problem,” Broncos coach Vic Fangio said. “Protection sometimes, receivers not getting open sometimes, them using good coverages that maybe we weren’t ready for. But it’s certainly a problem that we have to get rectified.”

The pocket consistently collapsed around quarterback Joe Flacco and Denver’s blitz pick-up was poor in Kansas City’s 30-6 victory. The Chiefs used one sack to stuff Colby Wadman on a disastrous fake punt, and then another later in the second quarter to record a scoop-and-score touchdown off a Flacco fumble.

Those notable plays set the tone for a dominating defensive effort by the Chiefs, who had six different players record sacks, with three of them — linebacker Anthony Hitchens, end Frank Clark and end Alex Okafor — nabbing two.

It all made for an alarmingly bad performance from a Broncos offensive line that had been showing marked improvement of late.

“They did a lot of stuff that we didn’t see on film, and the problem is every one of us on the line had a (bad) play,” center Connor McGovern said. “When everyone does that, it’s a lot of bad plays. Everybody took their turn (messing up), and it has to go back to us looking in the mirror and fixing what we did wrong.”

Entering Thursday’s game, the Broncos had allowed 15 sacks, 14 knockdowns and 21 pressures in six games for a combined 50 disruptions. That included six sacks allowed at Green Bay in Week 3, but just four sacks allowed over the previous three games. Denver was also able to run the ball in crunch time to seal its first couple of wins.

Such was the opposite case on Thursday.

“We didn’t establish the run,” rookie left guard Dalton Risner said. “(As a line) we were nowhere where we needed to be tonight to win the football game.”

“They brought more than we could handle,” running back Phillip Lindsay said. “Every time, there was (at least) one person free, and they were coming from different directions.”

Penalties were also an issue once again for left tackle Garett Bolles, who turned in another subpar performance. The 27-year-old second-year pro had three holding penalties called on him (two enforced), and is now up to nine called penalties on the year.

By the time Chiefs end Emmanuel Ogbah bum-rushed right tackle Elijah Wilkinson late in the third quarter to deflect Flacco’s pass on third-and-long, the hometown crowd had seen enough. They booed as the Denver linemen looked around at each other blankly following another busted protection.

Kansas City came into the game with 11 sacks, tied for 24th in the NFL, as Denver’s offense couldn’t make enough plays to force the Chiefs to call off the pressure at any point.

“It’s a thing where, if we catch them once, they tend to stop doing it,” McGovern said. “But we just couldn’t catch them on that big play when they were in Cover Zero.”