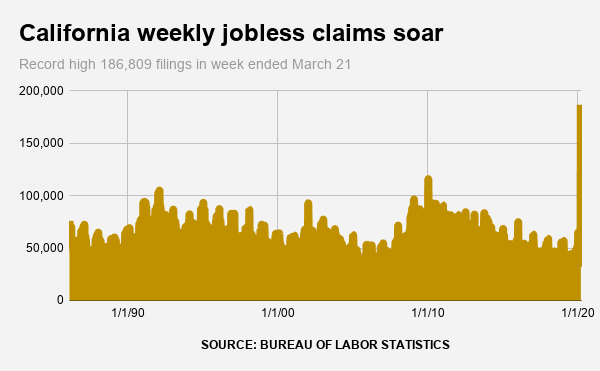 The number of Californians seeking unemployment benefits has officially set a record high.

And I’ll guarantee you this statistic — a quick snapshot of jobs lost since coronavirus ravaged the economy — paints too pretty a picture of a much uglier reality.

Sometimes economic stats aren’t as quick or as accurate as we’d like. Take Thursday’s release of what officials call the “advance number of actual initial claims under state programs.” It’s suddenly the hot new number for those looking to quantify the impact of coronavirus-mandated business closures.

Why do we care? Initial claims for unemployment benefits are seen as an early indicator of job losses. When we usually talk about employment trends, we typically look at monthly unemployment stats. But the first jobless report that will show a decent picture of the depth of California’s business shutdown won’t come out until mid-May.

So, we’re stuck with this quirky jobless claims data, which is basically a tally of who filled out the paperwork (probably online). Remember, not every person let go quickly files (though, if you’ve been laid off you should). Not every applicant qualifies for aid (and those standards change, as they will with various stimulus plans). And typically benefits aren’t for most folks in part-time jobs or “gig” work.

Caveats noted, last week’s tally of claims — triple the weekly average over the past 34 years — is a record that won’t last long. Economists at the California Forecast project statewide claims of around 700,000 when the next filing counts is reported. And Gov. Gavin Newsom said Wednesday that 1 million Californians have filed for benefits since the crisis began.

Now, 186,809 jobless claims in a week are far from small. Compare this measure of job loss with California’s 840,000 “officially” unemployed at last count in January. It’s easy to predict the state’s record-low jobless rate of 3.9% is now ancient history.

Please note that last week’s California claims ranked third-largest nationally behind Pennsylvania (378,908) and Ohio (187,784) — both those stats were noted as “state estimates” — and right ahead of Texas (155,657). California’s one-week increase ranked sixth-largest among the states.

As you can imagine, there’s similar bad news from the national job market. Using a comparable number to state data, 2.9 million claims were filed nationwide in the week ended March 21. That’s up 1,055% in a week — yes, an almost 12-fold jump! That’s a record-high, too.

No matter how you add up job losses, the coronavirus-linked spike is off the charts.

To be fair, we often ask too much of our economic stat keepers. It will take months, if not years, to fully understand what is happening right now. Our urge to know immediately conflicts with how detailed, accurate data is compiled.

So ponder what California Forecast estimates: 5 million jobs statewide could be lost due to coronavirus-related “stay at home” shutdowns. These analysts, who were among the most bullish on California before coronavirus, somberly remind us that the Great Recession “only” cost the state 1.1 million jobs.

“It’s an astounding situation that has virtually no comparable precedent,” the analysts wrote.