Previous Next
Cinderblock The Overweight Cat Strongly Dislikes Her Workout 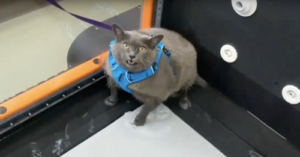 Workouts aren’t exactly a fun activity for most people or for most animals. Cinderblock the cat made this very clear in her viral workout video. Cinderblock, or Cinder for short, is a 25-pound Russian Blue cat that is trying to start a new workout routine in order to lose some weight.

However, she is very unenthusiastic with her weight loss routine. After a 13-second video her was posted on Facebook though, people all over the world began to cheer her on.

Cinder was recently brought to the Northshore Veterinary Hospital in Bellingham, Washington. Her previous family could no longer care for her, so she was taken to the hospital to be euthanized.

However, the staff at the hospital just couldn’t do it. They knew that Cinder could lose weight and find a new loving home in the future, so they decided to work together to help her safely lose the extra weight.

They decided that the best way for Cinder to lose the weight was for her to use an underwater treadmill. It is a great exercise option for animals because it’s easier on their joints. The staff was very encouraging, but unfortunately, Cinder just wasn’t really into exercising.

When Cinder first used the underwater treadmill, she was not amused. She sat in the corner and only put one paw on the treadmill. She sat there, tapping her one paw on it over and over again as she meowed. While it might not have been the most efficient workout, her video quickly gained a lot of attention for her.

Soon, lots of people were following Cinder’s story. They found her workout routine to be very relatable, so they started sharing funny posts to cheer her on. Northshore Veterinary Hospital began sharing more videos about Cinder’s progress as well.

Maybe all the fame helped encourage her or maybe she had a change of heart, but eventually, Cinder used the treadmill for its intended purpose. A video has now been shared of her actually walking on the treadmill, so she has made great progress since she first arrived at the vet.

Losing weight is not easy, but Cinder’s story has inspired many people. Cinder’s previous family was ready to give up on her, but the kind hearted vets knew that she had potential. Thanks to their support, Cinder is on the right track to become a healthy cat once again.

The clinic has even started a GoFundMe so that they can continue to provide discounted vet services to nonprofit organizations. Cinder is just one of the many animals out there that needs extra veterinary attention, so the Northshore Veterinary Hospital is grateful for all the donations they receive.