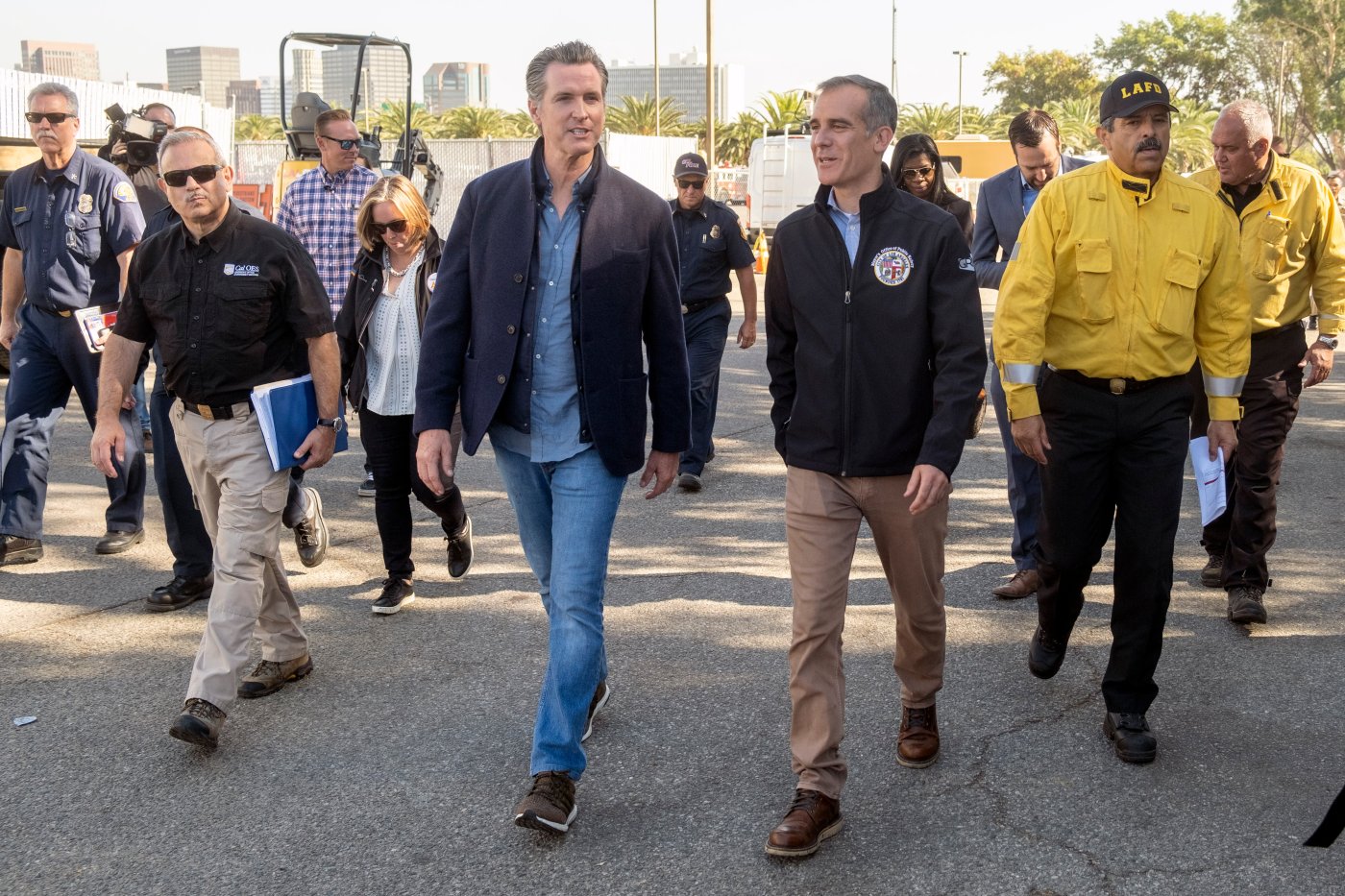 With a backdrop of a massive Navy hospital ship behind them, the leader of the nation’s most populous state and his counterpart at the nation’s second-largest city faced cameras on Friday, March 27. The common goal: “Bend the curve” for COVIC-19. Defeat it.

As Gov. Gavin Newsom met with L.A. Mayor Eric Garcetti on Friday in Los Angeles, they came together in the midst of an unprecedented crisis.

It is not, however, the first crisis the two have faced.

In Newsom’s relatively short tenure as governor — which began in January 2019 — he has already confronted a robust share of high-profile crisis moments, in which he and Garcetti faced common challenges. Giant wildfires. A massive teachers strike. ICE raids. Homelessness. Affordable housing.

Granted. No one’s seen anything like this. But on Friday, Garcetti almost did what has become common practice between the two high-profile leaders.

“Usually we’d embrace,” Garcetti said, as Newsom introduced him at new conference in front of the USNS Mercy, the 1,000-bed, 900-foot long floating hospital now docked in the L.A. Harbor, Newsom helped procure from the federal government as a support hospital for the county’s strapped system.

But in an era of “social distancing,” no hug this time. But there have been plenty of trials and triumphs leading to this moment.

Trump to Fox News commentator Tucker Carlson: “We cannot ruin our cities. And you have people that work in those cities.  They work in office buildings and to get into the building, they have to walk through a scene that nobody would have believed possible three years ago.”

There was the massive Woolsey fire, the raging Southern California monster in November that burned 96,949 acres, destroyed 1,643 structures and led to the deaths of three people.

And in that same month there was the Getty fire, where the two leaders found themselves together, touring burned homes in Brentwood.

And when the federal government threatened to send immigrants to sanctuary cities in California, Garcetti and Newsom once again were at the forefront of the response with other of California’s leading Democrats — slamming the idea as inhumane and illogical.

Of course. A pandemic is something wholly new, and urgently tragic. It is now taking a fierce toll across the state, and in particular Los Angeles. So far, the lethal respiratory illness, which is spread human to human, as of Friday has killed 26 people and sickened 1,465 people — numbers that will continue to climb.

Once again, Garcetti and Newsom are in the thick of it — pushing for more resources and supplies from businesses and the federal government while leading their governments’ respective responses to an epic situation. Both have established their respective “stay-at-home” orders. Both are on the cusp of an expected “surge” in cases that threaten to make L.A. look like New York in a matter of days, officials have said.

As the state mobilizes, Newsom and Garcetti pointed to a wide swath of people and organizations stepping up to “meet the moment,” from volunteers, to retired doctors to tech firms like Google and Apple to Elon Musk.

“This state is asserting itself, taking responsibility to meet this moment,” Newsom said. “We’re not pointing our fingers. We’re not clenching our fists. We have our hand out absolutely to the public sector and the private sector.”

Still, Newsom and Garcetti voiced concern over the state’s capacity to test people for the respiratory illness.

“They are both left-of-center Democrats. Both of them are high-profile. They’ve been friends for a long time,” he said.

But beyond that, the weight of the moment is on them both, Regalado said, adding they represent giant jurisdictions — the largest state, and one of the biggest cities in the world.

“Given this pandemic we’re facing and that they are facing as leaders of their respective jurisdictions, it makes sense to get along and forge a common bond and a common front against a universal silent killer.

“It does make sense to meet and meet more often, whether it’s by phone or in person,” he said.