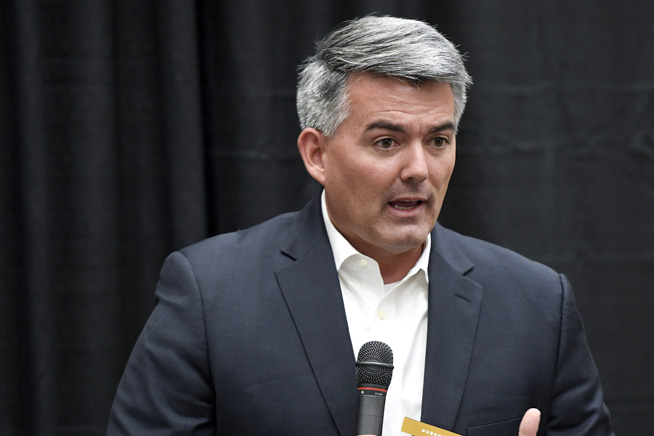 Only a few times in history has the United States faced an internal threat as profound as the one posed by the lawless President Trump, and all Americans who want to preserve the nation’s institutions are obliged to act. In Colorado, this means they should insist that Trump enabler Sen. Cory Gardner vacate his office immediately.

Gardner is one of Trump’s most valuable assets in Washington. Back home in his increasingly blue home state he is subject to escalating criticism of his record as he revs up his 2020 reelection bid. But Gardner’s unworthiness for public service goes beyond political disappointments. His dismal record on the environment, health care, guns and other issues does render him a poor fit for Colorado, and were his faults limited to such matters a trouncing at the polls next year would be satisfactory enough. But this is about a betrayal of public trust. Gardner’s disgraceful behavior in office makes him complicit in the corruption that’s polluting the channels of government, the dishonesty that’s destroying national institutions, the criminality that’s mocking the rule of law, and the perfidy that’s neutralizing the Constitution. Gardner swore that he would “support and defend the Constitution of the United States against all enemies, foreign and domestic,” but the Constitution is under attack, and far from defending the nation’s founding charter Gardner has aligned himself with its enemies. Coloradans should do what is in their legal power to shorten his term to whatever extent possible.

There can be little doubt that Gardner, who in the Senate votes with Trump 90% of the time, does not represent the views of Colorado. Gardner in 2014 defeated Democratic incumbent Sen. Mark Udall by only 2.5 percentage points. Compare that with the 2016 presidential race, when Hillary Clinton beat Trump in Colorado by 4.9 points. Two years later Democrats assumed control of the governor’s office and both chambers of the General Assembly, and Gardner and CU Regent Heidi Ganahl were left as the only remaining Colorado Republicans elected on a statewide basis. A recent poll shows Democratic Senate candidate John Hickenlooper ahead of Gardner by a comfortable 11 points.

Gardner does not reflect Colorado tendencies, and this alone is a reason many Coloradans want to see him voted out of office next year. But in several instances Gardner’s behavior has been so egregious as to demand a quicker exit.

Last November, President Trump tweeted that Democrats were “Trying to STEAL two big elections in Florida!” It was the kind of Constitution-threatening rhetoric Americans have come to expect from the president. But Gardner, from his perch as chairman of the National Republican Senatorial Committee and without the slightest bit of evidence, reinforced Trump’s dangerous claim and accused election officials of “fraud.” In other words, Gardner undermined the integrity of an American election as part of a political strategy. Such gargantuan bad faith should be a fireable offense.

Gardner this year cravenly voted to uphold Trump’s declaration of an emergency on the southern border, a move that involves the diversion of millions of dollars from Peterson Air Force Base in Colorado Springs. The declaration was a brazen abuse of presidential power and theft of Congressional prerogatives, but Gardner couldn’t bring himself to object. This was the failure of leadership that moved The Denver Post Editorial Board to take the unusual step of rescinding its 2014 endorsement of Gardner.

Then came the Zelenskiy call. On July 25, Trump in a phone conversation with Ukrainian President Volodymyr Zelenskiy used his Oval Office influence to pressure the foreign leader to investigate Democrats, thereby inviting foreign interference in an American election. This was the event that triggered an impeachment inquiry in the U.S. House, and it stood as a test of every American leader regardless of party: Who would prove true to the republic and defend its principles and who would take shelter in abject apologies? On Oct. 10, when speaking with reporters, Gardner declined to affirm that it is inappropriate for an American president to ask a foreign leader to investigate a domestic political rival. In his cowardly refusal to denounce Trump’s criminality, Gardner failed his Colorado constituents, he failed the country, and he failed his most basic Article I duties. He violated his oath to defend the Constitution. Earlier this month, retired Adm. William H. McRaven published an op-ed under the headline “Our Republic Is Under Attack From the President.” McRaven is the former commander of the United States Special Operations Command who oversaw the raid that killed Osama bin Laden. In his piece he expressed his concern that “Trump is destroying the republic!” — actual words uttered to him recently by a retired four-star general. If Trump is able to destroy the republic, it will only have been made possible by Republican enablers like Gardner.

So how might his constituency respond? U.S. senators are not subject to recall or impeachment, and generally there are only two ways a living senator departs office short of an election: The Senate can expel the senator or the senator can resign. Given these circumstances, the following should occur:

• Colorado constituents should vigorously exercise every possible First Amendment means by which to broadcast to Gardner that because he has betrayed the state he should quit service to it. This includes, at a minimum, emailing him (gardner.senate.gov/contact-cory/email-cory), calling him (Denver office: 303-391-5777), visiting his office (Denver: 1961 Stout St., Suite 12-300), addressing him on social media (@SenCoryGardner), showing up at public events he attends, and expressing views in the opinion sections of media outlets.

• Republicans who still value the Constitution and care about the soul of the GOP should mount a primary challenge to Gardner. Trump is popular among the Republican base in Colorado, and this likely is what motivates Gardner to sacrifice his integrity for the president’s sake. But there must be some viable Republican in the state whose affection for the proud traditions of the Colorado GOP and sense of duty to the nation outweighs any republic-wrecking electoral calculations.

• The General Assembly starting in January should consider adopting a resolution expressing its support for Trump’s impeachment, if not Gardner’s resignation. It might be inappropriate for the Legislature to call for an elected federal official to step down, since it could infect the state body with an intolerable measure of partisanship. But formal support for impeachment of a criminal president whom Gardner champions would nevertheless send a message to the senator.

The senator, of course, could reflect on his own place in history and find it in himself to proclaim what he surely knows to be true — that Trump should be removed from office. Or Gardner could choose the dignity of resignation over the humiliation of servility. The U.S. House will almost certainly impeach the president, and there are growing signs that a conviction by the Republican-controlled Senate is not out of the question. Does Gardner expect that if the president is pried from office that Coloradans will forget the senator’s subservience to the most dangerous chief executive in American history?