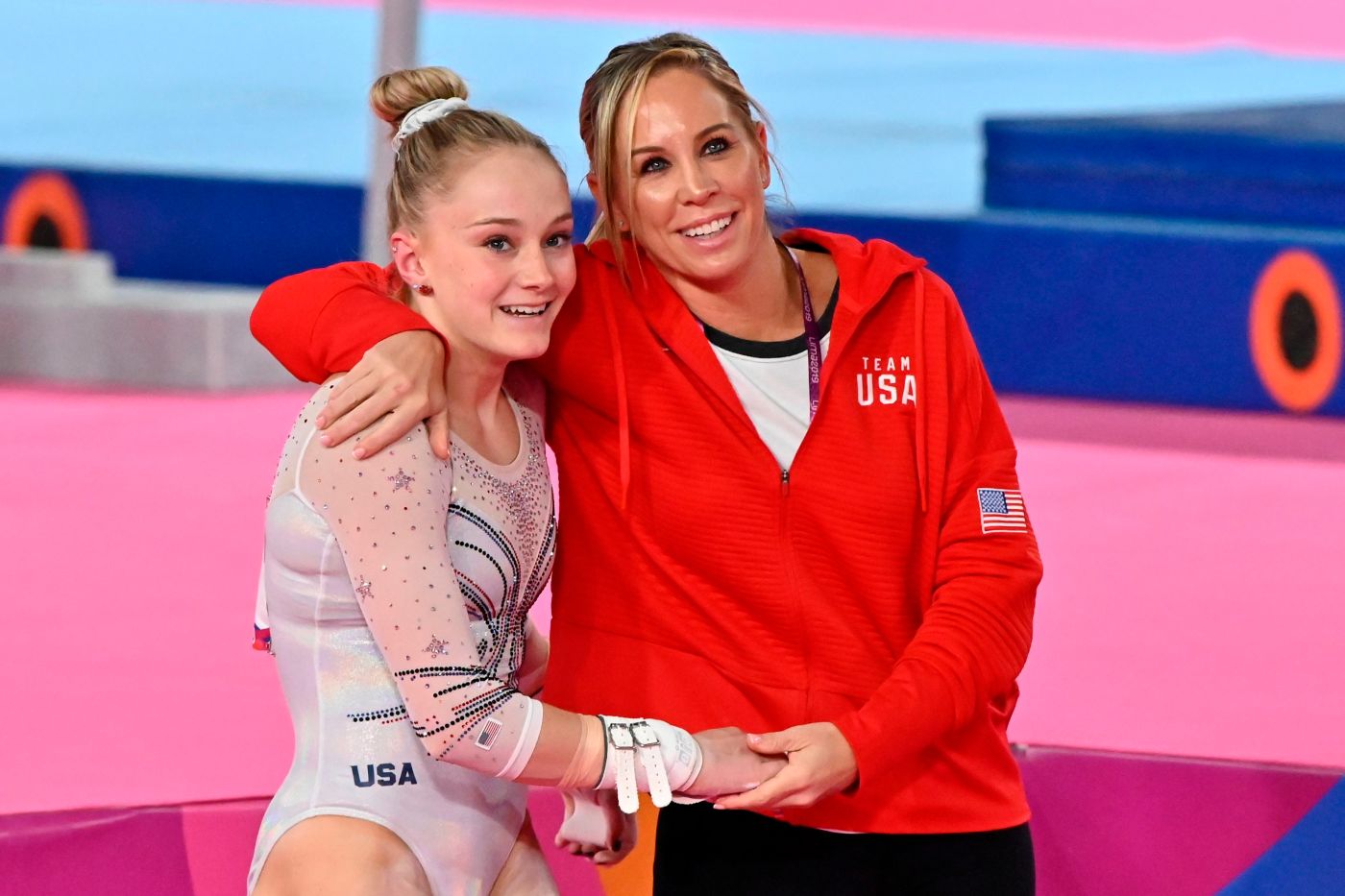 Three years after USA Gymnastics received the first complaints of verbal and emotional abuse against U.S. Olympic and national team coach Maggie Haney, the organization said its failure to hold a disciplinary hearing in the case is because of  federal laws governing American Olympic sports, according to USA Gymnastics documents obtained by the Southern California News Group.

USA Gymnastics officials including general counsel Mark Busby have repeatedly complained that the hearing has been delayed by the national governing body’s inability to find a Team USA athlete to sit on the hearing panel, a requirement of the Ted Stevens Olympic and Amateur Sports Act, according to USA Gymnastics documents.

Parents and gymnasts involved in the case have expressed outrage and frustration at USA Gymnastics, saying the Indianapolis-based NGB for months has promised it would hold a disciplinary hearing on the Haney matter only to have it pushed back by a series of delays.

“Everyone involved in a grievance process deserves an expeditious resolution, and the athlete perspective is vital to a fair and balanced process,” USA Gymnastics said in a statement to SCNG Thursday.  “We know individuals involved are frustrated and, quite honestly, so are we.”

An attorney for Haney, however, said USA Gymnastics has failed to take two measures that would expedite the case. USA Gymnastics has not asked Haney to waive her right to have an athlete representative on the hearing panel, a practice that is not uncommon in disciplinary cases, Russell Prince, the attorney, said. USA Gymnastics has also failed to honor multiple requests by Haney for a follow-up interview with investigators, Prince said.

“We’ve been begging them for a follow up interview,” Prince said. “Maggie Haney wants to talk.”

At least a half-dozen families have filed complaints with USA Gymnastics against Haney, coach of Olympic and world champion gymnasts, according to USA Gymnastics documents and six people familiar with the cases.

Haney is alleged to have screamed, swore at, threatened, bullied, and harassed gymnasts on a regular basis, according to USA Gymnastics emails and interviews with six people familiar with the complaints. Haney has also told injured gymnasts to remove boot casts and to continue training and competing, according to USA Gymnastics documents and interviews.

Haney, a former North Carolina State gymnast, has continued coaching young athletes at MG Elite Gymnastics in suburban Monmouth Junction, N.J., 45 miles from New York City. She was also part of the Team USA staff at the Pan American Games in Lima, Peru this past summer and attended a recent U.S. national team camp in Florida.

Haney is best known for coaching 2016 Olympic gold medalist Laurie Hernandez and Riley McCusker, who won a gold medal with the U.S. squad in the team competition at the 2018 World Championships and is considered a contender for multiple medals at next summer’s Olympic Games in Tokyo. McCusker missed the World Championships earlier this month because of a muscle ailment frequently linked to overtraining. She has since resumed training with Haney.

USA Gymnastics officials first received complaints about Haney’s alleged mistreatment of young gymnasts in 2016, not long after the Olympic Games, according to four people familiar with the USA Gymnastics investigation. The complaint arrived at USA Gymnastics at a time when Steve Penny, then the organization’s president, and other top officials were trying to contain the Larry Nassar sexual abuse scandal and was not given a high priority, according to people familiar with the investigation.

Busby, USA Gymnastics general counsel, has been aware of complaints against Haney since at least 2017, according to four people familiar with the investigation. Current USA Gymnastics president and chief executive officer Li Li Leung has confirmed in emails that she is also aware of the allegations.

Haney received a formal notice of the allegations against her on June 4, Prince said. She was last interviewed by USA Gymnastics on June 14, taking part in a video conference with Busby and a USA Gymnastics investigator while she attended a U.S. national team training camp in Sarasota.

Busby and other USA Gymnastics officials have repeatedly told parents of athletes allegedly mistreated by Haney that the delay in holding the hearing stems from the organization’s inability to secure an athlete representative to sit on the hearing panel that meets the Stevens Act requirement, according to USA Gymnastics documents and interviews.

Under USA Gymnastics and USOPC by-laws a hearing must be made up of at least three individuals and at that athletes must represent at least 20 percent of the panel. According to the Stevens Act athletes eligible to sit on a panel must be in USA “individuals who are actively engaged in amateur athletic competition in the sport for which recognition is sought or who have represented the United States in international amateur athletic competition within the preceding 10 years, that any exceptions to such guidelines by such organization have been approved by the corporation, and that the voting power held by such individuals is not less than 20 percent of the voting power held in its board of directors and other such governing boards;”

USA Gymnastics, in its statement to SCNG said, it “recognizes and agrees with the United States Olympic and Paralympic Committee about the importance of including athlete voices on standing committees and hearing panels for safe-sport matters.  However, participation by athletes who meet the USOPC’s definition of an eligible athlete is not easy due to the 10-year restriction, which limits the pool of eligible and available athletes.  In many instances, the lack of athlete availability for hearing panels reduces our ability to move forward in resolving a number of cases.

“USA Gymnastics is not the only national governing body struggling with this matter.  We are actively working with the USOPC and others to identify viable solutions for resolving the situation.  Changing the parameters for athlete participants on committees and hearing panels would allow us to better serve individuals involved in grievances, help with the availability of people to serve on hearing panels, and ultimately provide a more time-effective conclusion to these cases.”

Busby has asserted to parents and others that one solution would be to enlarge the pool of potential panel members by relaxing some of the time requirements. Such a move would require changing federal law.

“One option is to expand the definition to allow for athletes outside of the 10-year window to serve on hearing panels,” USA Gymnastics said in the statement.  “Athletes who are outside of the 10-year period have had time to become established in their professions and their families are a little older.  In contrast, younger athletes are in college or just beginning their careers and families, which means they have limited time to dedicate to these important tasks.  We also believe allowing non-national-team athlete members to participate in panels that deal with non-national-team matters would widen the pool of available athletes.”

The attorney said if USA Gymnastics was serious about expediting the Haney case it would grant her request for a follow up interview and then ask her to waive her right to have an athlete on the panel. Prince said he has been involved in at least a dozen cases since 2017 where an individual has waived their right to have an athlete on a hearing panel.

“They’ve not asked us about waiving her right to have an athlete rep,” Prince said. “We would.”

“No we haven’t because we’ve been begging them to take a follow up interview, begging for another interview” he said. “I don’t know how you can go to a hearing without conducting a thorough follow up interview. It just doesn’t pass the smell test.

Prince said he last spoke with USA Gymnastics about the Haney case on Oct. 8.