El Monte cop killer had not been seen by L.A. probation officials for months before attack 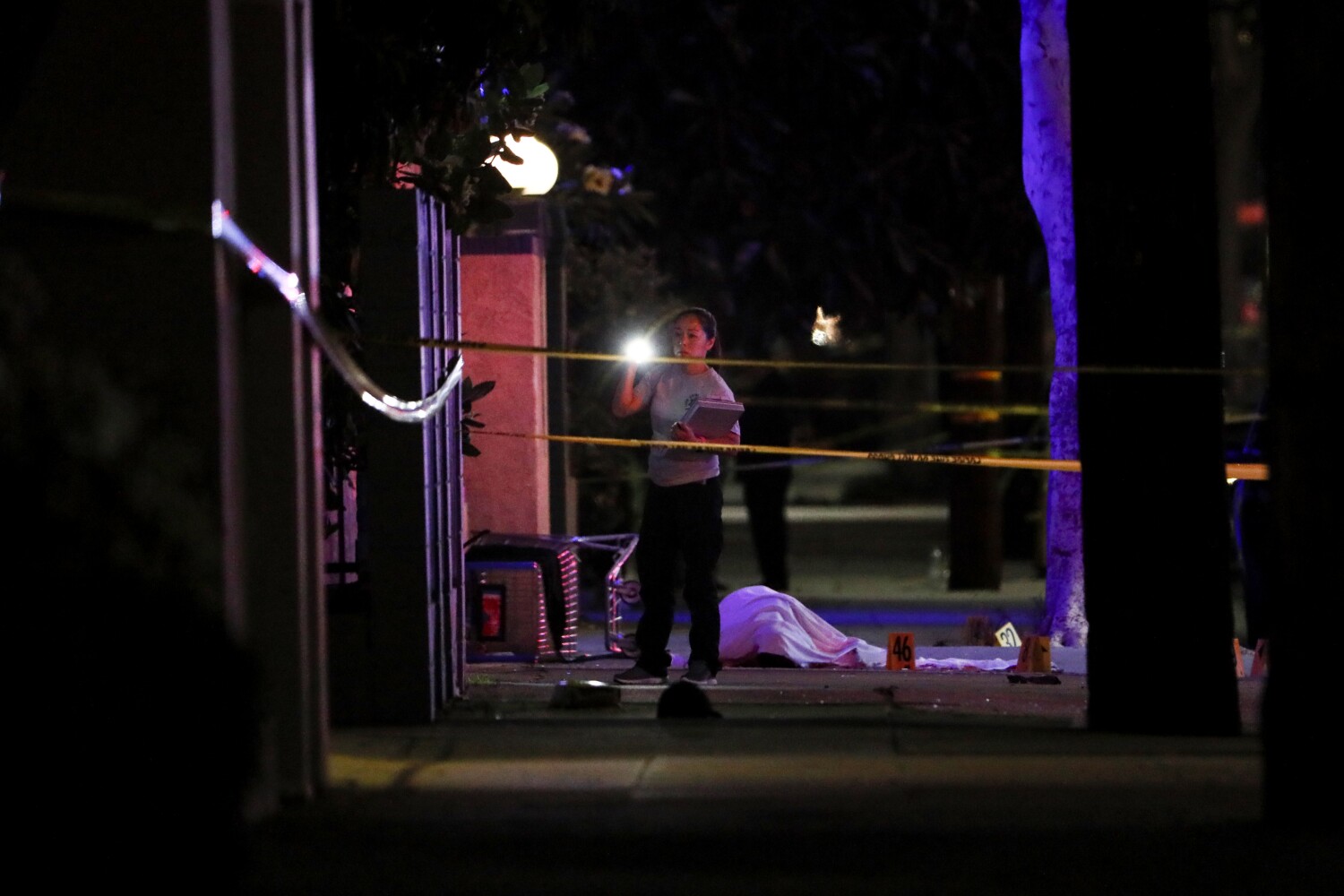 Justin Flores was on probation the night he shot and killed two El Monte police officers. But his probation officer hadn’t seen him in person in more than six months.

In the days before the killings, the Los Angeles County probation department received concerning reports that Flores was in possession of a gun — which he was barred from having due to a felony conviction — and that he had beaten a woman he was romantically involved with, according to three law enforcement officials with direct knowledge of the case.

After Flores gunned down El Monte Police Officer Joseph Santana and his training officer, Cpl. Michael Paredes, this month, frustrated friends and loved ones looked for someone to blame. A review of court records and interviews with law enforcement officials suggest an increasingly troubled Flores should have been taken into custody before he opened fire on June 14.

On Friday, L.A. County Supervisor Hilda Solis told The Times she ordered the County Office of the Inspector General and the civilian Probation Oversight Commission to investigate the probation department’s handling of Flores’ case in the months leading up to the killings.

The move came amid growing concern that probation officers have been lackadaisical in personally checking on their clientele since the COVID-19 pandemic. The day after the El Monte officers were killed, Probation Chief Adolfo Gonzales called an “emergency meeting” to order an audit of field contacts between officers and probationers, according to a probation official with direct knowledge of the situation who requested anonymity because they were not authorized to discuss the case with the media.

“People got lazy. … When you have these high-risk offenders on probation, it’s an in-person visit,” one official said.

Laurie Levenson, a former federal prosecutor and professor at Loyola Law School in Los Angeles, said Flores’ case highlights the many leaks springing in an overworked and underfunded criminal justice apparatus that processes hundreds of thousands of people throughout L.A. County annually.

Santana and Paredes were responding to a reported domestic violence incident around 4:30 p.m. on June 14 at the Siesta Inn, a one-story stucco motel in a stretch of El Monte that has struggled with crime.

The officers were able to get the victim out of the room while Flores retreated into a bathroom. Flores then opened fire, shooting both officers in the head, sources told The Times. Flores stole a gun off one of the fallen officers and ran into the motel parking lot, where he engaged in a gun battle with other responding officers. He fell to the ground before taking his own life.

A documented member of the Quiet Village gang, Flores had a lengthy criminal record that included convictions for burglary, multiple driving violations and a multitude of arrests for drug possession, court records show. In early 2021, he was placed on probation as part of a plea deal after he was arrested for being a felon in possession of a gun.

While Los Angeles County Dist. Atty. George Gascón has faced heavy criticism for the plea deal, which some critics dismissed as too light, the probation department’s handling of Flores once he became their responsibility is drawing increasing scrutiny.

On June 2, 12 days before the killings, the probation department received a domestic violence allegation against Flores and a complaint he was in possession of a firearm, according to three law enforcement officials. That same day, a probation officer completed a phone “check-in” with Flores and directed him to show up for an in-person meeting on June 6, according to a statement issued by the probation department.

But Flores never showed up, probation officials said. Around the same time, Flores’ mother, Lynn Covarrubias, called her son’s probation officer concerned he had been abusing drugs again. Covarrubias said Flores began relapsing in March after his cousin was murdered in Commerce. Flores had been living at the Siesta Inn with his wife, Covarrubias said, where both had descended into drug use.

“I told them my son and his wife were doing drugs and he needed help and him going back to jail wouldn’t help him, and the probation officer told me he couldn’t discuss his case with me,” Covarrubias said, noting that Flores’ wife was listed as his next of kin. “He said the only way he could get my son back into a program was if he did something wrong and to report it to the [sheriff’s department.]”

Attempts to contact Flores’ wife were unsuccessful, though she has claimed in a television interview that he abused her.

Covarrubias has maintained Flores was not abusing his wife and has rejected reports that her son committed suicide during the gunfight with police. She has offered condolences to the families of both slain officers, but she also expressed frustration toward the probation department for failing to intervene.

“I do feel the probation department should have stepped in and did more to help, to get him help. And they didn’t,” she said.

Probation officials would not comment on what the department knew, or when, but said an internal investigation has been initiated. El Monte police officials declined to comment on the probation department’s handling of Flores.

The probation department submitted what’s known as a “desertion report,” and a hearing to revoke Flores’ probation was scheduled for the end of June, records show. That hearing could have resulted in the issuing of a warrant for Flores’ arrest.

If Flores had shown up for his June 6 meeting with his probation officer, it would have been the first time anyone from the department laid eyes on him since December, officials said.

Probation officers are supposed to schedule in-person meetings with their “clients” once per month, according to the department, but that policy was relaxed during the COVID-19 pandemic. Instead, the department, like many other such agencies throughout California, opted for monthly phone check-ins.

One probation official contended that in-person visits would have been crucial in supervising Flores, who had a long record of misdemeanor offenses and was known to struggle with drug addiction. Based on the recent domestic violence and gun-related allegations, and the fact that Flores’ mother said her son began using drugs again in March, an in-person visit would have raised alarms earlier, the official said.

The failure to monitor Flores properly reflects broader issues with supervising probationers throughout the county. The morning after the killings, a probation department director sent an internal message concerned about “field contacts,” according to an e-mail reviewed by The Times.

“Our field contact numbers reflect that staff are not going out enough in the community,” the e-mail read. “Our caseloads are at an all-time low … we are also having a high rate of unsuccessful contacts.”

A probation department spokeswoman said that e-mail was “unrelated to the Flores case” and issued by a representative of a different bureau within the agency. But Gonzales, the department’s chief, also called an “emergency meeting” the day after the killings to discuss concerns about officers failing to meet their probationers in person, according to a source with direct knowledge of the meeting.

“He said, ‘we need to make sure that everybody is conducting supervision, have all your officers conduct an audit to make sure we’re making the supervision contacts’ … the words were ‘all hands on-deck,’” the person said.

A probation spokeswoman declined to comment on the description of the meeting.

The questions about the probation department’s failure to properly monitor an adult in its custody come as the agency has faced increased scrutiny over its operations. The county’s two juvenile halls, which are controlled by the probation department, have repeatedly failed inspections and been deemed unsuitable to house youths by the California Board of State and Community Corrections in the past year.

A lawsuit filed this year also alleged more than 20 young girls had been sexually assaulted over a dozen years at a juvenile camp run by the probation department.

“We don’t do a lot to individualize our defendants. You’re either the drug defendant and its just a drug problem, or a violent defendant who we have to take seriously,” Levenson said. “What we don’t anticipate is how a person on drugs can quickly become violent.”

Santana and Paredes will be laid to rest Thursday in El Monte.