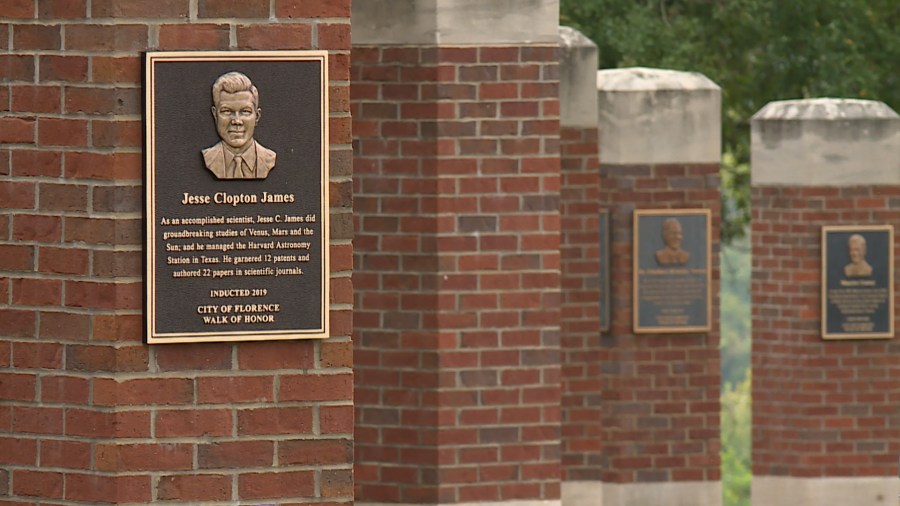 FLORENCE, Ala. — It began as a collaboration among Florence city officials to honor and recognize residents of Florence and Lauderdale County—the Walk of Honor.

The monuments can be found in River Heritage Park behind the Marriott Shoals Hotel & Spa.

It serves to honor those Lauderdale County residents who have excelled at the national or international levels in various fields of endeavor, like Robert E. “Bob” Bruninga, who invented the Automatic Packet Reporting System (APRS) for amateur radio.

“I want to thank the people of Florence and the mayor’s office for this wonderful honor, and I cannot think of a better place to receive it than this, what used to be grassy knoll overlooking the lock and dam and the mighty Tennessee River,” Bruninga said in a video message.

Also inducted was Rear Admiral Mary Alice Hall who is the first Navy nurse since World War II to receive the Distinguished Service Medal. Hall is also the first military nurse to command a military hospital.

Allen Butler, Vice President of the Greater Shoals Chapter of the Military Officers Association of America spoke on her behalf.

“We’ve had three members of our MOAA group be selected,” Butler said. “They’re always very honored; they’re always surprised that somebody’s recognizing what they did as very, very important.”


The Shoals Chamber of Commerce launches fund to assist entrepreneurs

Inductees honored posthumously are Jesse Clopton James, a scientist who did groundbreaking studies of Venus, Mars, and the Sun, and Reeder Glenn Nichols, who served as a radio engineer for the 1934 England-to-Australia airplane race. A mountain in Australia is named in Nichols’ honor.

The four new inductees join 46 others who were selected in previous years.