Is Your Cat Nursing on Herself, Blankets or Other Objects? Should You Worry?

Previous Next
Is Your Cat Nursing on Herself, Blankets or Other Objects? Should You Worry?

I adopted my Cornish Rex, Carson, when he was about 4 months old. He was a sweet, affectionate kitten, with an unusual behavior. He would suck on his chest and stomach, most often in situations where it seemed he wanted to comfort himself. Caron, particularly did this, when he was adjusting to his new home. When I asked my vet about the behavior, he said that it was likely caused by Carson being weaned too early. He advised me to keep an eye on the behavior to ensure Carson wasn’t making himself bleed or severely irritating his skin. In my case, the most damage my cat ever caused was to make the fur on his chest and stomach pretty damp. So, what’s up with cat nursing behaviors and when should you worry? Let’s take a look: 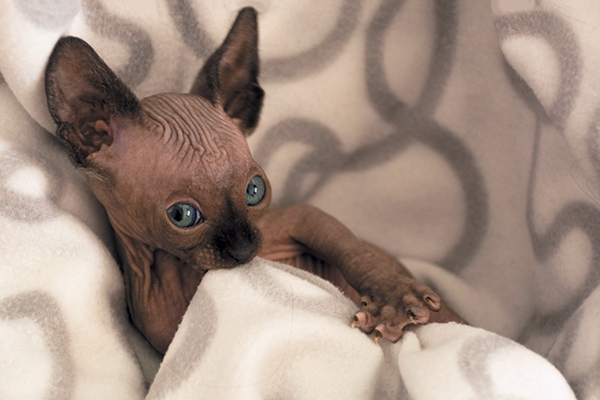 The name most commonly used to describe this cat nursing behavior is “wool sucking,” as the kittens who engage in this activity may suck on items such as sweaters and blankets (hence the “wool” in the name) as well as shoelaces, ribbons and other fabric-like items including carpet. The kitten might also suck on himself (as in Carson’s case) or another animal’s tail. Wool sucking typically indicates that a kitten was separated from his mother too early, explains Marilyn Krieger, a certified cat behavior consultant and author of Naughty No More!

“But there are other reasons for the behavior,” she says. “Separation anxiety and stress can also trigger cats to wool suck and nurse. Stressors include sudden changes, new pets and neighborhood cats.” Other events like too many pets in the home or the sudden absence of a family member (such as through divorce or a young adult moving out of the home) can also trigger the behavior.

Don’t worry: As my veterinarian mentioned with Carson, a cat nursing himself typically does not cause himself any harm. Krieger says that most kittens outgrow the behavior as they mature.

“Most kittens will gradually stop nursing after they are introduced to solid food,” she explains. “Kittens should remain with their moms until they are 12 weeks old. Some will continue to try to nurse on their mum but will eventually grow out of it.”

Be concerned: Wool sucking, however, can become more serious if the kitten or cat prefers to suck on fabric items. “There is the danger of chewing and ingesting the material, possibly resulting in an intestinal blockage,” Krieger says. She also cautions owners to be concerned if the behavior extends past the cat’s first year of life.

“It’s important to determine the reasons behind the self-comforting behavior,” she explains. “Owners should first have the cat evaluated by a veterinarian. Although substituting something that is safer for the cat to suck can help, it’s important to identify and deal with the source of the stress. In addition to identifying and dealing with the triggers, people can help through enriching the [cat’s] environment.” Krieger cautions against trying to force a cat to stop wool sucking. “It creates more anxiety and stress for the cat,” she says.

Another behavior associated with cat nursing is kneading. In our house, we call this activity “the kitty dance,” as it looks like the cat is practicing a feline tango routine. Jack, my 9-year-old red tabby, is the most frequent “dancer” in our household and often performs this activity on a soft pillow on our couch just before curling up for a nap.

Krieger explains that cat kneading often accompanies wool sucking and cat nursing and is another self-comforting behavior. For example, kittens knead when they are nursing to help stimulate their mother’s milk production.

“Feral cousins of our household kittens often knead to make a soft place amongst the vegetation for napping,” Krieger adds. “One theory states that kneading is also one of the ways that cats might mark their territories. They have scent glands on the bottom of their paws. When they knead, they are activating these glands and leaving their scent.”

Don’t worry: Kneading generally is recognized as a way cats express their happiness, and many cats will continue to knead throughout their lives (as Jack likes to demonstrate on almost a daily basis). In fact, cats almost always purr when they knead and may even involve all four paws in the rhythmic up-and-down activity.

Be concerned (but only for yourself!): Many cats associate their owners’ laps with happiness and may begin to knead while relaxing with their humans. The happier your cat becomes with this situation, however, the more intense the kneading may become, and if your cat involves his claws in the activity, it could become a bit painful for you!

Tell us: What strange cat nursing behaviors does your kitty have?

This piece was originally published in 2017.

A lifelong cat owner, Stacy N. Hackett writes frequently about cats, cat breeds and a range of pet-related topics. The inspiration for her writing comes from her four cats — Jack, Phillip, Katie and Leroy. And her Cocker Spaniel/Labrador Retriever mix, Maggie.

Editor’s note: Have you seen the new Catster print magazine in stores? Or in the waiting area of your vet’s office? Click here to subscribe to Catster and get the bimonthly magazine delivered to your home.