Joe Flacco out with neck injury, Brandon Allen in at quarterback for Broncos vs. Browns on Sunday – Boulder Daily Camera

Previous Next
Joe Flacco out with neck injury, Brandon Allen in at quarterback for Broncos vs. Browns on Sunday – Boulder Daily Camera 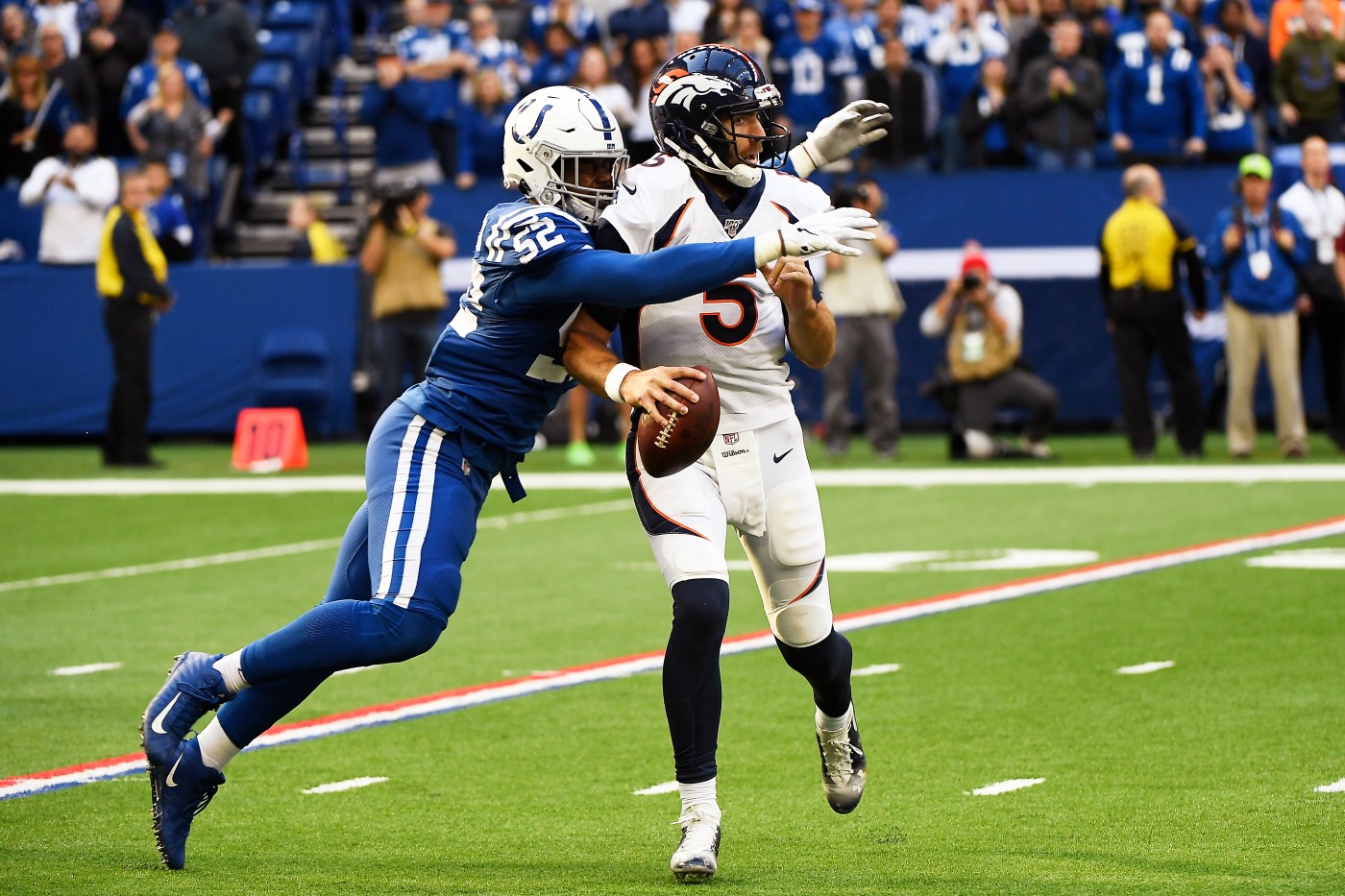 A herniated disc in his neck will prevent quarterback Joe Flacco from starting for the Broncos Sunday against the Cleveland Browns.

Brandon Allen will make his first NFL start and the backup will be Brett Rypien or Drew Lock, according to Broncos coach Vic Fangio. The Broncos medical staff told him surgery for Flacco isn’t required “right at this minute. … But those things are fluid,” and putting him on injured reserve is possible down the road.

The Broncos (2-6) will have Allen backed up by Rypien or Lock, none of whom have taken a regular-season snap. Allen will be the sixth different Broncos starting quarterback since 2016. At least for this game, it is more logical to promote Rypien from the practice squad because he’s been participating in workouts for the last two months and Lock (thumb) has been on injured reserve.

Flacco was treated by trainers and team chiropractor Mike Leahy on the sideline throughout the second half of Sunday’s 15-13 loss at Indianapolis but was able to finish the game. He said afterward he had been “dealing with it for a couple of weeks; there’s just a little strain in there.”

If the little strain has turned into a big injury, it’s possible that Flacco’s season could be over.

The Flacco development came a day after he criticized the Broncos’ offensive strategy in the second half of the Indianapolis game.

“It just feels like we’re kind of afraid to lose a game,” he said after the Broncos squandered a 13-3 lead.

Fangio on Monday cited the Broncos’ overall offensive ineptness as a reason for Flacco’s criticism.

“He’s frustrated like the rest of us and upset and mad about the game and the way it went,” Fangio said. “I think he’s talking about the whole fourth quarter and second half, when we struggled, (and) not so much the last drive.”

The Broncos ran the ball on third-and-5 and leading 13-12. The Colts stopped the run, then regained possession with 1:48 remaining and no timeouts and kicked the winning field goal with 22 seconds left..

According to Christopher Wolf, an orthopedic spine surgeon at Cedars-Sinai’s Kerlan-Jobe Institute in Los Angeles, a disc herniation occurs when the outer rim of the disc “breaks and the disc material squeezes out of the defect and pushes on (a nerve) that it isn’t supposed to.”

The key factor in determining the seriousness of the injury is arm function.

“If (Flacco) has arm pain, he’s hurting the nerve and they’re not going to let him play,” Wolf said in a phone interview.

The best course of treatment for Flacco will be rest combined with the use of anti-inflammatories.

Flacco has been durable throughout his career. A knee injury in 2010 ended his streak of 122 consecutive starts to begin his career and kept him out six games. Last year for Baltimore he started the first eight games before sustaining a hip injury. When he was ruled healthy, coach John Harbaugh stuck with rookie Lamar Jackson. The Ravens traded Flacco the Broncos in March for a 2019 fourth-round pick.

When the Broncos acquired Flacco, his salary cap number this year was $18 million and there was no “dead” money on his deal. In late August, though, the Broncos re-structured his contract to create immediate salary cap space.

But because of the injury and the team’s poor performance, could Flacco be one year and done with the Broncos? According to a league executive who looked at Flacco’s contract on Monday, the Broncos would absorb a “dead” cap hit of $13.6 million in 2020 if they release him after the season.

Flacco has six touchdowns, five interceptions and an 85.1 passer rating. He has been sacked 26 times, which put him on pace for a career-high total.

The Broncos are 26th in yards and 28th in points per game but led by 10 points early in Sunday’s second half. They followed a touchdown with five consecutive punts, prompting Flacco’s rare outburst about the conservative play-calling.

“As players, we’re just trying to execute the best we can … to help the team win,” he said. “I just feel like sometimes … we can make it easier on ourselves by not being afraid to be aggressive.”

The Broncos passed three times with a 13-6 lead and five times while leading 13-12 during a drive bridging the third and fourth quarters.

Asked about offensive coordinator Rich Scangarello’s play-calling, Fangio said: “We’re doing fine there. I think we can just be a little bit more assertive when a team is playing us the way (Indianapolis) was playing us.”

Allen next man up

The Broncos acquired Allen, 27, off waivers from the Los Angeles Rams on Sept. 1. A sixth-round pick by Jacksonville in 2016, he started 38 games for Arkansas and threw a school-record 64 touchdown passes.

“I think (he’s) as comfortable as he can be (with the offense) given the lack of reps in practice,” Fangio said. “The starter gets the bulk of the reps and he got here after the preseason. There is some carry over to the (Rams) offense that he came from to here so that obviously helped.

“I think the guy’s got a little something to him and we’ll devise a plan for him.”

The next part of the Broncos’ quarterback plan is deciding between Rypien and Lock as the backup.

Rypien, an undrafted rookie from Boise State, threw for 207 yards, one touchdown and two interceptions in the preseason.

Lock, a second-round pick by the Broncos, was on his way to winning the backup spot when he sustained his thumb injury Aug. 19 against San Francisco. He had one touchdown and interception apiece in three games.

“We have to decide if Drew is ready — he hasn’t done anything in a huddle or a practice since the third preseason game,” Fangio said. “That’s a long time ago. We want to make sure he’s ready before we put him out there.”

One option could be elevating Rypien for the Browns game and following the bye week activating Lock for practice, which starts a three-week window for the Broncos to decide whether to put him on the roster or keep him on injured reserve.

The Broncos, already struggling on offense, will now try and revive their season with Allen playing against Cleveland on Sunday.

“We’re just going to move forward like we would if we were 3-5,” Fangio said. “We’re going to get ready for the Cleveland Browns. We’re going to work hard all week and have a good week of preparation like these guys have (been doing). We’re going to show up Sunday and put our best foot forward trying to get a win.”

How acquired by Broncos: Via waivers from the Los Angeles Rams on Sept. 1. Served as Broncos’ backup in first eight games.

NFL experience: No regular-season playing time. Was a sixth-round draft pick by Jacksonville in 2016 and spent the season on the practice squad. Spent Weeks 1-15 of 2016 and Weeks 1-2 of 2017 on the active roster, but did not play.

Notable: Father, Bobby, works in the Arkansas football program as director of high school/NFL relations. Younger brother, Austin, also started at quarterback for the Razorbacks. … Started 38 games for Arkansas, including the final 34 of his career. Threw a school record 64 touchdown passes and finished career second in completions (583) and attempts (1,016) and third in passing yards (7,463).

When Brandon Allen starts Sunday against Cleveland, he will be the sixth different starting quarterback for the Broncos since Peyton Manning retired after the 2015 Super Bowl season: