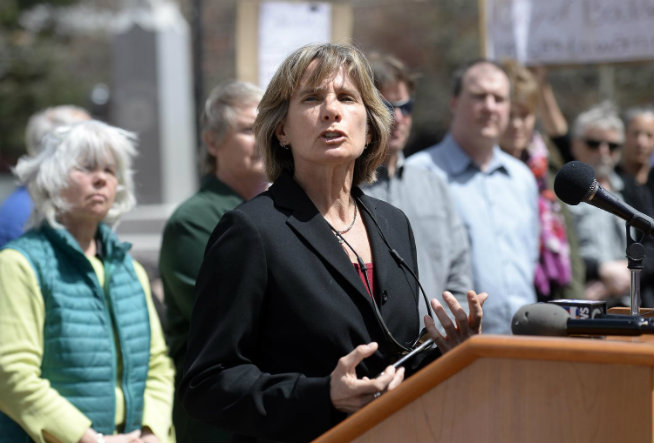 It was well over a year ago that the city of Boulder and Boulder County with some fanfare joined with San Miguel County to file a lawsuit against two fossil fuel companies, seeking to hold them accountable for the damages associated with climate change.

In the often molasses-uphill world of civil litigation, it is not unusual for cases to move slowly. But if it was a race between the molasses and the headline-grabbing Boulder climate change litigation, the syrup would be the winner.

It is not yet known, even, in which court the lawsuit, which targets Exxon Mobil Corp. and Suncor Energy and was filed in Boulder District Court on April 17, 2018, will be heard.

The slow motion in which the litigation is moving — or, isn’t moving — is both par for the course, and not. The death of a federal judge has something to do with that.

Although the case was filed initially in Boulder District Court, a venue in which the plaintiffs might reasonably expect to have a better than fighting chance, the defendants promptly moved on June 29, 2018, to have it transferred to U.S. District Court in Denver, which is where it currently is cooling its heels. Previous similar cases filed on both coasts and heard in federal courts, have met differing fates.

The legal team representing the plaintiffs in the case subsequently filed a motion on July 30 to move the case back to Boulder’s jurisdiction. The attorneys handling the case in succeeding months briefed U.S. District Judge Wiley Daniel on the respective merits of their arguments, and were set to present oral arguments before Daniel on May 30.

That hearing, however, was suddenly scuttled, when Daniel, the first African-American judge to be appointed to the federal bench in Colorado, died unexpectedly of a heart attack May 10 at the age of 72.

It was more than two weeks later before lawyers on the case even got word on who would now be taking the case from Daniel’s docket; that would be U.S. District Judge William J. Martinez — and even that took some degree of sorting out.

Marco Simons, general counsel for EarthRights International, which is working with its litigation partners pro bono in support of the Colorado plaintiffs on the case, was vacationing this week, but commented on the delay by email from Peru, where he is traveling.

“The unexpected death of Judge Daniel shortly before our scheduled hearing was a tragedy and occasioned some delay in the case; we have had judges in our cases pass away before,” Simons said.

“Even more unusual was the series of judicial assignments afterward — first to Judge (Daniel) Domenico, who recused himself; then to Judge (Robert) Blackburn, who exercised his right as a senior (semi-retired) judge to decline the assignment; and now to Judge Martinez. I have never before had a case assigned to four different judges within three weeks.”

Boulder Mayor Suzanne Jones said, “Of course, we send condolences to the judge’s family for their loss.”

A clerk in Martinez’s office on Thursday said the postponed May 30 hearing concerning which court should determine the suit’s fate has not yet found a landing spot on Martinez’s suddenly more crowded calendar.

Incidentally, the Denver federal court system’s bench took yet another hit May 26 when retired U.S. District Judge Richard Matsch, who lived in unincorporated Boulder County for many years, also died. He had held senior judge status since 2003, still overseeing some cases even though he was semiretired.

An argument raised by the defendants in their bid to keep the case in federal court is that the local governments are seeking to regulate greenhouse gases, something they contend is beyond the purview of a state district court.

The companies contend the remedies sought by Boulder, along with both Boulder and San Miguel counties, “would tread directly on the government’s unique interest in promoting fossil fuel production and crafting international agreements to address global warming. Plaintiffs’ claims therefore squarely implicate, and interfere with, the strong federal interest in addressing transboundary pollution suits in a uniform manner.”

The city and counties’ lawyers counter that their complaint “makes clear that they are not seeking to regulate greenhouse gas emissions anywhere, and they are not asking a court to determine whether any emitter is liable.

“This case is only about defendants’ liability for selling a product at levels that caused harm: very specific tortious conduct. There is nothing inherently or necessarily federal about that conduct or this case. Emitters — like the smokers in the tobacco cases brought by nearly every state under state common law — are nothing more than foreseeable (and intended) parts of a causal chain.”

The plaintiffs’ lawyers go on to argue that just as states were not regulating smokers when they sued tobacco companies “for selling and misleadingly promoting cigarettes, Plaintiffs are not regulating emitters by suing defendants for damage caused by their sale of fossil fuels.”

At the time that the Colorado climate change lawsuit was filed, it was one of 10 across the country, although it was the first to be brought by plaintiffs in a landlocked state.

Decisions on other parallel cases have gone both ways. In June 2018, U.S. District Judge William Alsup in the Northern District of California dismissed a climate change lawsuit brought by the cities of San Francisco and Oakland against defendants including BP, ConocoPhillips, Chevron, Exxon Mobil and Royal Dutch. He recognized the science of global warming and the dangers it poses to the planet, but said the courts were not the place to deal with what were actually global issues.

That’s echoed in the oil companies’ argument to keep the Colorado case in federal court, who asserted in court filings, “Plaintiffs target global warming, and the transnational conduct that term entails …This is why similar lawsuits have been brought in federal court, under federal law. It also explains why, when federal courts dismissed those lawsuits, those plaintiffs made no effort to pursue their claims in state courts.”

However, in the same federal courthouse in San Francisco, in March 2018, a different federal judge, Vincent Chhabria, ruled that a climate change case brought by Marin and San Mateo counties and the city of Imperial Beach belonged in state court. That decision is now before the Ninth Circuit Court of Appeals.

On the East Coast, U.S. District Judge John F. Keenan in the Southern District of New York in July 2018 ruled in a case brought against fossil fuel companies by New York City that  “climate change is a fact of life,” but that “the serious problems caused thereby are not for the judiciary to ameliorate. Global warming and solutions thereto must be addressed by the two other branches of government.”