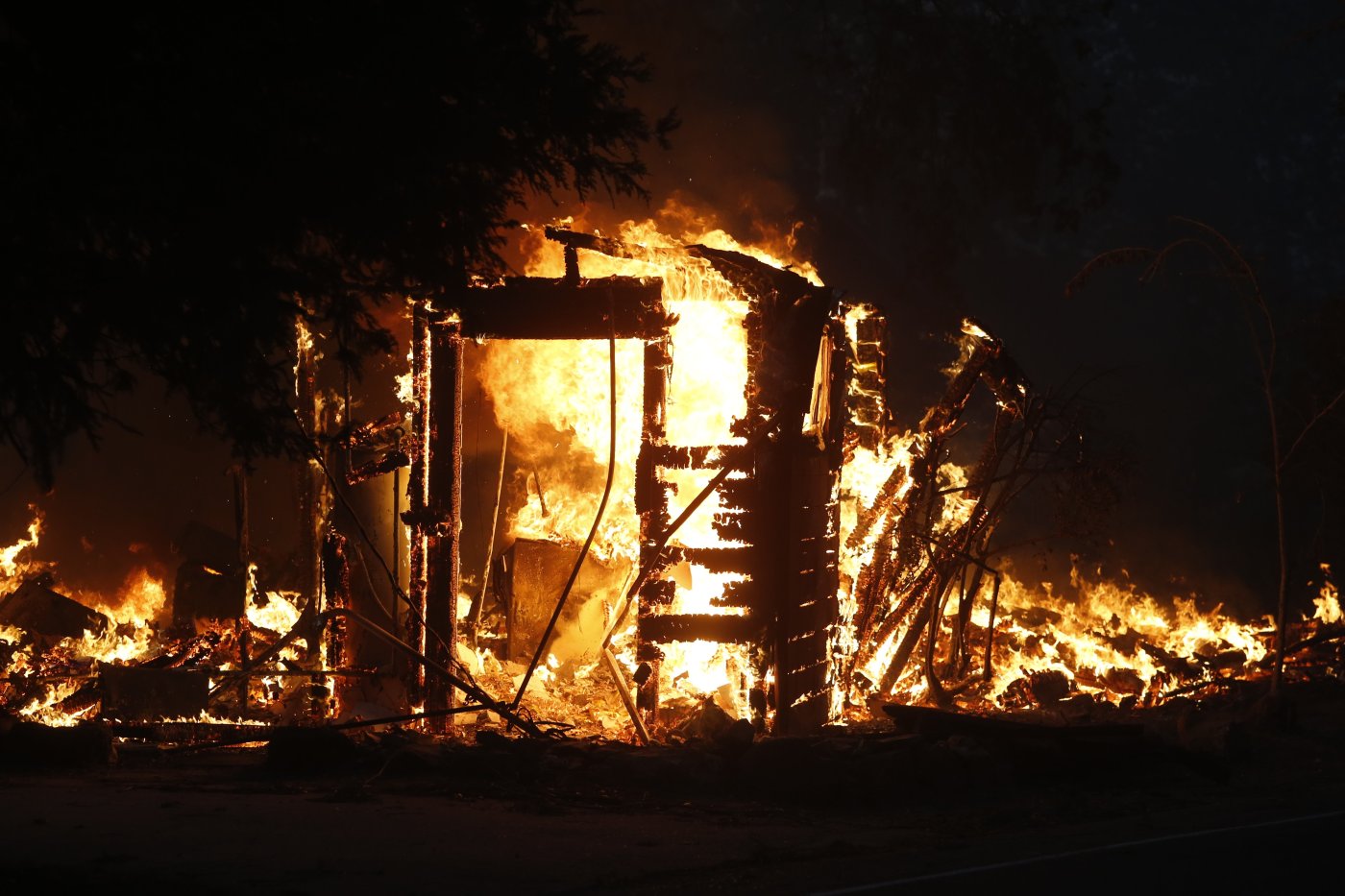 GEYSERVILLE – The Kincade Fire has swelled to 21,900 acres early Friday, destroying nearly 50 structures and forcing the evacuation of 2,000 residents in Sonoma County as the region gears up for yet another possible power shutoff.

The conflagration was just 5 percent contained as of early Friday morning, over 24 hours after it ignited northeast of Geyserville, according to the California Department of Forestry and Fire Protection, or Cal Fire. There have been no reports of fatalities or missing persons.

Even as they deal with the ongoing emergency fire management, Sonoma officials await word of another possible “public safety power shutoff” this weekend in response to dry, gale-force winds expected to return Saturday.

“Now we’re dealing with two separate incidents, the fire and the PSPS,” said Sgt. Juan Valencia of the Sonoma County Sheriff’s Office, adding that he urges residents to “just be ready for any type of immediate evacuation or be ready to go without power.”

At a news conference in Geyserville on Thursday night, Cal Fire Deputy Fire Chief Mike Parkes said weather conditions that triggered a red flag warning for much of the North Bay had improved. But the reprieve will be brief.

“We absolutely are up against the clock,” Parkes said.

The forecast currently calls for 40 to 60 mph gusts over “most of the elevated terrain of Northern California,” with peak gusts of 70 to 80 mph in isolated locations, said Scott Strenfel, Pacific Gas & Electric Co. chief meteorologist, at a news conference in San Francisco.

Utility officials said another public safety power shutoff could be called for parts of the East Bay, San Francisco Peninsula, North Bay, Central Coast, Humboldt County and Sierra Foothills. It remains to be seen exactly how many customers would be affected.

Similar conditions prompted PG&E to preemptively cut power to 179,000 customers in 17 counties, including near where the Kincade Fire ignited, beginning Wednesday afternoon. As of 5:30 p.m. Thursday, electric service had been restored to 125,000 customers.

Back in Geyserville, Sonoma County Sheriff Mark Essick said evacuation orders remain in place for 2,000 residents. All roads east of Highway 101 in the Geyserville area are closed.

“We want people to heed those evacuation warnings,” Essick said at the news conference. “Leave the area. We have plenty of deputies in the area to protect your property and we will assist you in your evacuation.”

Evacuation centers have been established at the Healdsburg Community Center, but that is at capacity as of early Friday morning, said Sgt. Juan Valencia with the Sonoma County Sheriff’s Office. Another center remains open at the Veterans Memorial Building at the Sonoma County Fairgrounds in Santa Rosa.

Valencia said that while many evacuees have tried to return to their homes, the Sheriff’s office has also received reports of non-residents trying to enter evacuated areas to look at damage.

“We get it, people are curious in nature — but we’re just asking people to stay out of the area … so that we can do our jobs,” Valencia said.

The cause of the conflagration remains under investigation, though PG&E on Thursday revealed it had found broken equipment on one of its transmission towers near the point of origin. The tower in question was not turned off during the recent power outages.

“We’re continuing to investigate” the cause of the fire, Johnson said. The tower is 43 years old — not that old by industry standards — and had been inspected multiple times in recent years, he said, adding that it “appears to have been in excellent condition.”

Over 1,300 fire personnel from various agencies are battling the blaze.

For some residents, the Kincade Fire rekindled memories of the deadly blazes that tore through the North Bay two years ago. Sonoma County Supervisor David Rabbitt encouraged anyone who needs mental health services to contact HOPE Sonoma at 707-291-3788.

Check back for updates.