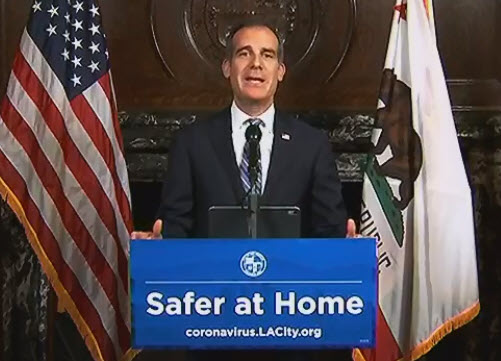 The Los Angeles Convention Center will become a field hospital to help relieve the pressures brought on by the novel coronavirus pandemic, Los Angeles Mayor Eric Garcetti said Sunday, March 29, in the information-packed latest edition of his evening livecasts.

A team from the U.S. Department of Health and Human Services — alongside 30 members of the US National Guard — helped equip the convention halls with medical supplies and cots, Garcetti said.

The mayor’s remarks came as the county announced 332 new cases on Sunday and five additional deaths.

“I mourn and the rest of us mourn for those who have lost a loved one today,” Garcetti said. “We are with you and feel your pain and will mourn alongside you.”

To help out with the mammoth task facing LA’s medical community, Garcetti announced Port of Los Angeles Executive Director Gene Seroka would serve as the city’s new chief logistics officer. Job One for Seroka: Coordinate getting hospitals get supplies they need to fight the widening outbreak.

Garcetti began his address, fitting for a Sunday, with calls to be thankful and consider the bright side of the daunting situation facing the city — and the world.

“I think we all feel the heaviness of life these days,” Garcetti said. “We can see the sunshine each day as we navigate these tough moments.”

But the mayor acknowledged that getting outside was not advisable these days except to pick up groceries, to get some exercise or to walk a pet. With beaches and parks mostly closed, there were limited options.

“Yesterday and today was the first time we saw across California our beaches and trail heads, the parks who define who we are, were not there for us,” Garcetti said.

Garcetti, who described speaking with more than 50 mayors from around the world during a conference call on Friday, said Angelenos should prepare for two months of isolation and closures — and then leaders will “assess where we are.”

It’s possible, Garcetti said, that some people could be released from isolation earlier than others.

Garcetti also offered additional points of progress around the city: