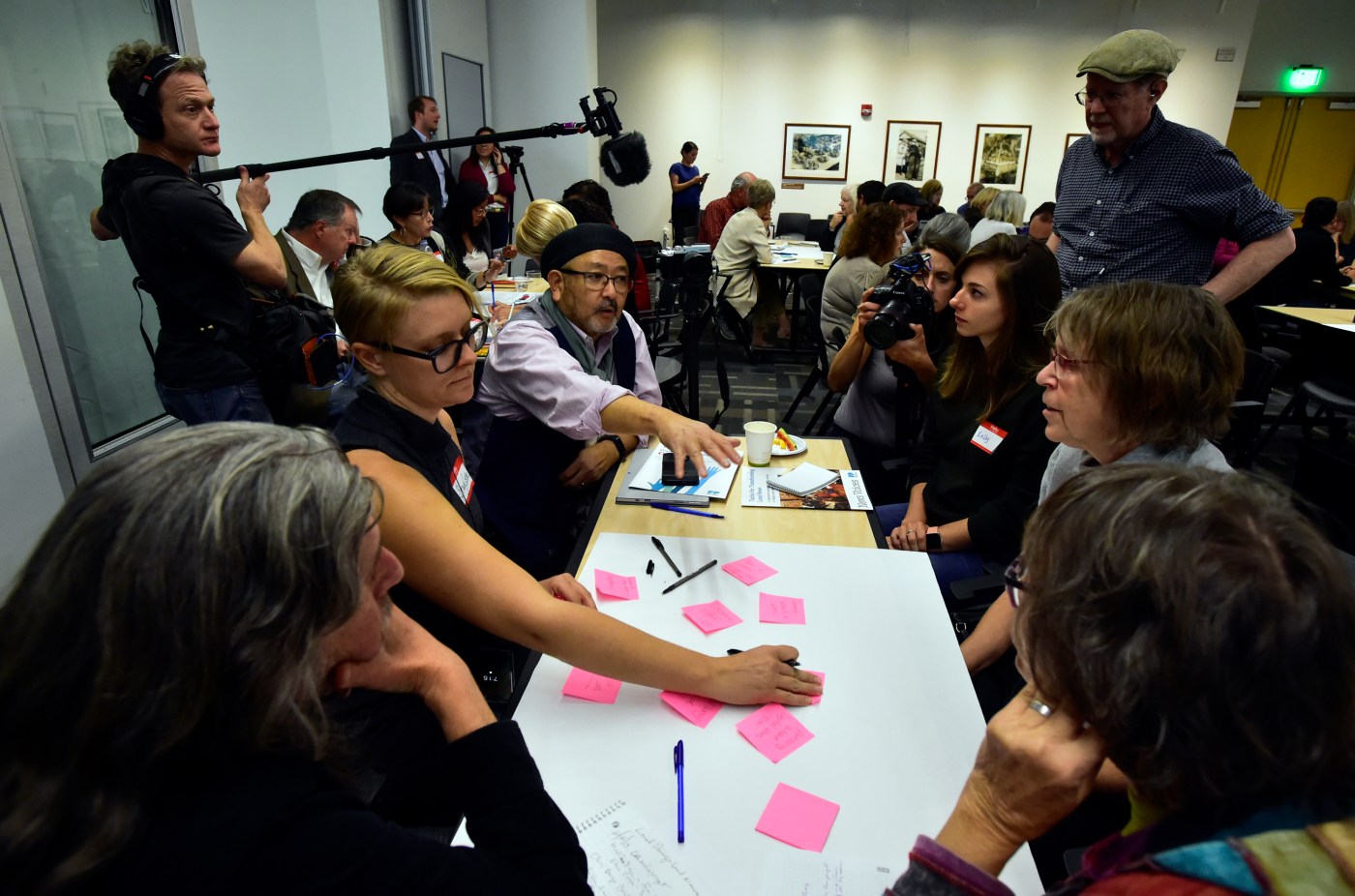 Like journalists do, local media sources put pen to paper Wednesday evening as they talked with the people of their communities to learn how to better serve their readers now and in the future.

The Colorado Media Project and Free Press joined representatives from KGNU radio, the Longmont Observer and the Longmont Times-Call in a public forum called, “Local Voices for Local News” at the Longmont Museum. Roughly 80 people participated in the event to provide feedback and their hopes for improving local media.

Kicking off the event, each representative talked about their visions for local media and the importance of keeping journalism alive.

John Vahlenkamp , managing editor of the Times-Call and Loveland Reporter-Herald, said he had frequently been questioned about the longevity of the Times-Call and whether it would exist in five years. Vahlenkamp, who has been in the news industry for more than 30 years, said the local newspaper has continued to adapt, appealing to digital platforms, consolidating resources and forging partnerships with other newspapers.

“My answer still is yes, as long we don’t forget who we are and what our job is,” Vahlenkamp said. “We are here to keep the community informed, to bring clarity to uncertainty, to be consistent, accurate and a trustworthy local voice. If we fail to do that it will not matter what our business model is.”

Macie May , the editor in chief of the Longmont Observer, a digital newspaper founded in 2017, talked about her desire to bring more local news to Longmont residents and the power to unite the future newspaper with the future library.

“We don’t want Longmont to become a news desert, if that’s where it was headed,” May said. “Our community was crying out on Facebook and other forms of social media and saying ‘we want more. We want more.’ Well, we heard you.”

She credited the Longmont Observer for being “innovators” in local news, especially when it comes to funding alternatives. May talked about the formation of a library tax district as a source of local media funding and said City Council was considering the option and working on a feasibility study.

“If Longmont says the library might be a good place for a newsroom that conversation could be reintroduced,” May said.

The proposed tax district, if it were approved by voters, would see a news operation funded by a library district supported by a new tax on those in its boundaries, but some have raised questions about the objectivity of a potentially government-funded news source.

Rossana Longo , a reporter for community radio station KGNU,called on local media to include more diverse voices, journalists and stories to move news into the future.

Longo talked to the audience in both English and Spanish to emphasize her points. She described an indigenous concept called La Minga, which means to working together.

“The modern news cycle has become so fast that it is easy to lose track of stories that will have a lasting impact on the future,” Longo said. “The programming that you hear on KGNU is simply from the people and you can’t find it anywhere else.”

After media members addressed the crowd, those in attendance split into small groups to discuss improving local journalism.

George Baskos, of Longmont, said he wanted to local newspapers with fewer press releases “spoon-feeding info” to readers. He said journalists should check in regularly with major sources to get information, rather than waiting for the information to show up in their inboxes.

Ray Ramirez, who has lived in Longmont for 30 years, expressed some criticism of the Times-Call and Boulder Daily Camera, saying the papers have lost their “local flavor.” He encouraged the papers to have more people-based stories and diversity of voices.

When questioned, Vahlenkamp also addressed some criticism of the Times-Call and Daily Camera’s corporate ownership. He said he discussed with people who visited the group that the corporation does not control content.

Reflecting on the feedback Wednesday, Vahlenkamp said he was “heartened” to see the forum’s response from the community.