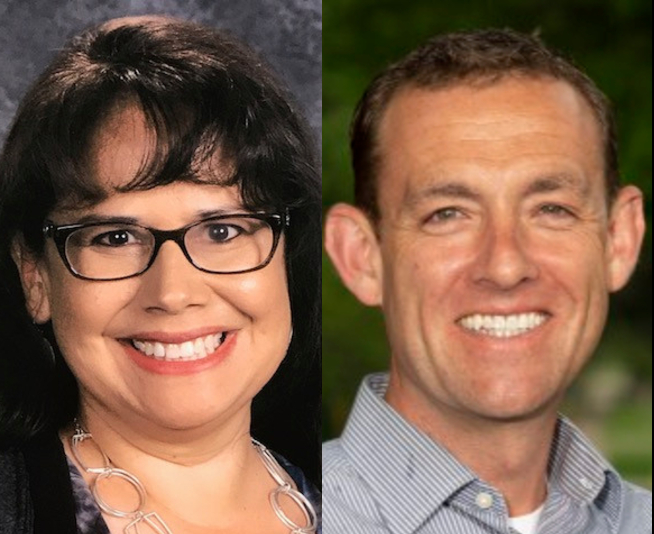 Both candidates in the contest for Longmont’s Ward 3 City Council seat have been applying stickers to their yard signs to make it prominently clear their campaign committees paid for them.

Regan Sample’s and Susie Hidalgo-Fahring’soriginal yard signs were the subject of campaign-violation complaints to the Longmont City Clerk’s Office. The issue originally came up on Oct. 8, and led to a series of back-and-forth communications between the city clerk and the candidates, as well as some harsh words from the candidates for one another.

City Clerk Dawn Quintana separately found that each of the two candidates’ signs violated Longmont’s Fair Campaign Practices Act, which states a candidate’s or a candidate committee’s “electioneering communications” — such as yard signs — must include a “prominently featured” disclosure stating who paid for the communication.

Quintana on Oct. 8 received a complaint from resident Murray Wallace about Sample signs that Wallace said appeared to violate the code.

Wallace sent Quintana a photo of one of the signs and said, “I don’t see anywhere the name of the person making the expenditure.”

Quintana on Oct. 8 notified Sample that based on her investigation of the complaint, she concluded Sample had violated the Fair Campaign Practices Act, giving him seven business days to remedy the violation or 14 days to contest her decision.

Sample in an Oct. 10 communication to Quintana maintained he hadn’t violated the law and delivered a sign to the clerk’s office.

Quintana on Oct. 15 wrote Sample that she’d received a second complaint, on Oct. 14, in which Carol Teal wrote she noticed Sample’s yard signs don’t include information about who paid for the signs.

“I have reviewed the original complainant’s photo along with the picture you submitted as well as the actual yard sign,” Quintana wrote Sample on Oct. 15. “After review and consideration, it is my opinion and determination that the disclosure is not ‘prominently featured’ as required by the act. Upon close and careful inspection, a person can see that the disclosure is printed on the signs; however, the disclosure is not evident or visible to a regular person at a reasonable distance from the sign.”

She suggested Sample could resolve the violation by “placing a sticker on all yard signs with the disclosure ‘Paid for by the Committee to Elect Regan Sample for City Council Ward 3’ such that the disclosure is evident and visible to a regular person at a reasonable distance from the sign.”

Sample on Oct. 17wrote Quintana that he would add the suggested stickers to all signs in locations of which he was aware.

He added, though, that “a number of signs have gone missing …” and said that “if they were to reappear, I would gladly apply the stickers to those if notified of their location.”

Sample on Oct. 17 also filed a complaint alleging that Hidalgo-Fahring’s yard signs “do not prominently feature or clearly state the full name of the person or entity making the expenditure.”

He provided a photo of a Hidalgo-Fahring sign he said was “evidence that from a short distance any such disclosure is not prominently featured.”

Quintana notified Hidalgo-Fahring on Oct. 22 about the complaint and the photo and said she concluded Hidalgo-Fahring’s signs were not in compliance with the requirements of the Fair Campaign Practices Act.

Hidalgo-Fahring on Oct. 23 proposed to remedy the violation by applying a statement to her yard signs that more prominently and in a larger type size states “Paid For By Susie for Ward 3.”

Quintana last week wrote Sample and Hidalgo-Fahring that the stickers each had proposed would satisfy the code’s requirements and resolve the violations.

The city clerk also acknowledged, in separate letters to Sample and Hidalgo-Fahring, that “because campaign season is already in full swing, it is understood that many signs have been distributed and may be in locations” the candidates and their campaigns “may not be aware of. As such, it is agreed that a reasonable effort will be made” by the candidates and their campaigns “to correct as many yard signs as possible, but that 100% compliance may not be feasible.”

Both candidates in separate interviews said they’ve been applying the remedial disclosure stickers on scores of yard signs.

Sample acknowledged in an interview and text messages that he filed his complaint about Hidalgo-Fahring’s signs after being notified about the original complaint about his signs.

“It’s a shame, and it never would have crossed my mind until I had a complaint against me and heard my opponent was attempting to convince other candidates to file complaints,” Sample said. “And when I happened across a (Hidalgo-Fahring) sign, I noticed I couldn’t see the disclosure on my opponent’s sign …”

When told of Sample’s allegation that she was trying to get other candidates to file complaints, Hidalgo-Fahring said, “That is flat-out not true. That is a lie.”

She questioned why Sample hadn’t talked to her before filing his complaint about her signs.

“I would have done that,” she said.

Hidalgo-Fahring said her original disclosure on the bottom of her yard signs was similar to what she’d seen on some signs supporting Proposition CC, the measure asking Colorado voters to give up Taxpayer’s Bill of Rights refunds and allow that money to be spent on transportation and education.

She said it seemed “very mean-spirited” for Sample to challenge the adequacy of that disclosure and accuse her of violating Longmont’s campaign code, particularly because she had not seen any more prominent disclosure language on Sample’s own signs.

Sample said he thought he had distributed or put out abut 90 yard signs before being notified of the complaint about his signs.

“I can’t say for certain” how many of those he’l be able to remedy with the new stickers, he said, because 15 to 18 have been stolen or are otherwise missing.

Hidalgo-Fahring said her campaign materials have included about 150 yard signs.