Looking for best fundraisers, some Boulder-area schools tap outside companies 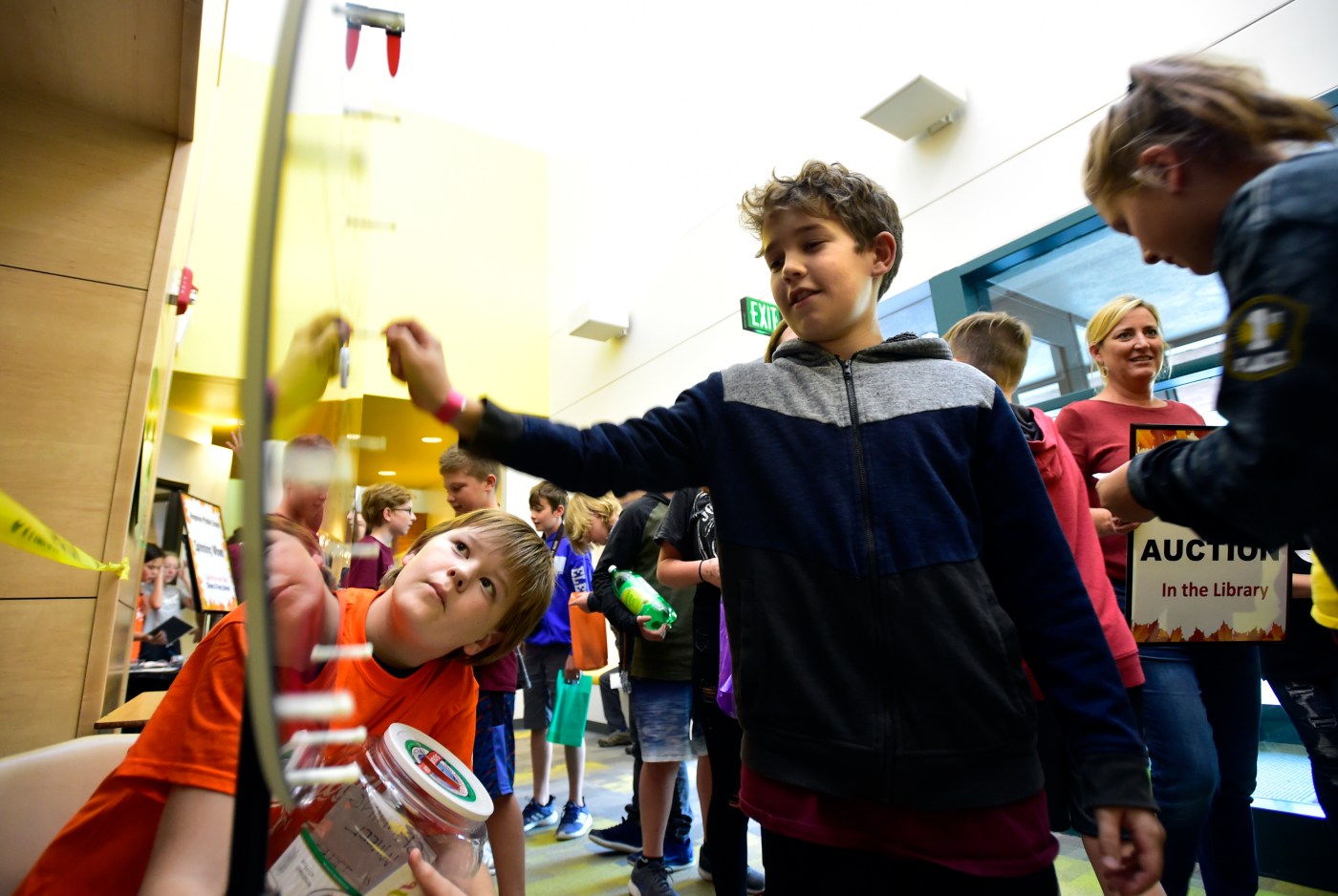 Fall is fundraising season for many local schools, with parent-teacher organizations leading fun runs and fall festivals to help pay for everything from extra support in classrooms to supplies for projects to copy paper.

Figuring out the most effective way to raise money while avoiding asking too much of parent volunteers and school staff members can be a challenge.

Some local local schools have turned to for-profit companies to run school fundraisers, though those companies in other districts have generated parent complaints over the high percentage money raised that the companies keep — generally, around 40% to 50%.

Other concerns include allowing an outside company to spend class time on fundraising efforts — and to potentially pressure students.

Assistant Superintendent of School Leadership Robbyn Fernandez, who previously was the principal at Aspen Creek K-8, said parent volunteers at the Broomfield school suggested hiring an outside company to run the school’s fundraiser as a better business model, reducing what is typically a hefty time commitment for both parents and staff members.

“They have the whole system,” she said. “These companies are able to raise a large amount of money. Even with the cut that they take, you can still come out with the same amount of money as doing the fundraiser yourself.”

‘Too much staff time’

Brent Caldwell, the principal at the time, said parents had tried a “huge variety” of fundraisers and had settled on a direct give campaign. But the school was struggling to raise enough money that way to cover the cost of teacher aides hired to provide extra classroom support.

“It came down to us truing to get money until the last day of school,” he said. “We were barely able to squeak out what we needed.”

So they turned to Booster, which helped the school raise about $65,000 through its fun run, about $15,000 more than the school raised on its own, even after the company took its cut.

Genna Jaramillo, who is now the school’s principal, said she worked with the parent-teacher organization last year to evaluate whether Booster was still the best company.

While she said she didn’t feel comfortable disclosing the specific percentage of donations that goes to the company, Booster offered the best deal and provides a sliding scale based on how much involvement the company provides. In the past, parents and staff members handled the lead up to the run, while Booster ran the run itself. This year, Booster is handling both parts.

“It took too much staff time,” Jaramillo said.

Plus, she said the staff members Booster sends are always professional and do a good job teaching about character traits like honesty and teamwork as part of their presentations to students.

Caldwell, who is now in his third year as principal Erie’s Meadowlark PK-8 after opening the school, said he went with Booster for the first year. But for the last two years, the school has organized its own event.

“When we looked at the return and how much the company took of the overall fundraising, the parent group said ‘we can exceed that,’ ” he said, noting the school’s carnival and silent auction pulled in about $45,000 last school year. “It’s a great community event and very well attended.”

He said the money goes mainly to buy supplies for the school’s makerspaces, which include a space for woodworking and another for culinary arts.

“We’re really focused on these opportunities for students that cost a lot of money,” he said.

“It becomes all about the money,” she said. “The children are responsible to raise the money for their education and are told that whatever it takes is what they should do to get that money. There are equity concerns on who gets to participate and how they’re made to feel.”

This kind of fundraising, she added, relies on social pressure.

“There’s this person who comes to the classroom and tells you, ‘you’ll get prizes, it’s all great.’ Kids who do it well are good kids and are supporting their school. The child is being manipulated. The friends and family are being manipulated.”

In some places, the companies running the fundraisers have required students to raise a specific amount of money to participate in the fun run or another fun event.

To attend, students are required to either raise $60 or send 20 emails through the company’s email system. For this model, the company is taking a flat 50 percent of the money raised.

Leading up to the Booster Bash, grade levels competed for prizes, sponsored by local businesses, that included a silly string party and ice cream sandwiches. Students also were entered into raffles for meeting specific goals and could win prizes for raising certain amounts, from sunglasses to an Apple watch.

In Boulder Valley, officials said, no district schools restrict participation in school events based on a student’s ability to raise money through a fundraiser.

And while any fundraiser that offers student incentives for raising money can create equity issues, school principals are careful to make sure all students feel included, Fernandez said.

“The teachers really take care of the kids,” she said. “Nobody feels left out.”

At Heatherwood, Jaramillo said, every student gets a T-shirt and is invited to participate in the fun run, whether the student raises money or not. Teachers also give prizes to students who they know can’t raise money because of family circumstances, while some parents donate extra for those students. And, when a fundraising goal is met, there’s an all-school Popsicle party.

“We try to include everybody,” she said.

Issue is an ongoing conversation

At Lafayette’s Angevine Middle School, which held its annual fall carnival on Thursday, the parent organization sets aside several hundred dollars worth of tickets for students whose families can’t afford to spend $5 to $10 on games.

“If you just show up, we’ll give you some tickets,” Principal Mike Medina said.

He said the school, where about 45% of students are low income, can’t raise enough money to make using an outside company worth it. Instead, he said, the school depends on staff members, parent volunteers and community support to run the fall fundraiser, which includes games, food trucks and a silent auction.

It’s also the school’s only fundraiser for the year, other than a fundraiser specifically for the music department. The event raises $10,000 to $15,000, Medina said. Last year, the money paid for a new audio/visual system for the cafeteria. This year, it’s earmarked to turn a library computer lab into a makerspace.

Inequities created by schools’ differing abilities to raise money has been on ongoing conversation in the school district — and it’s an issue district officials say is challenging to address.

In 2005, at the request of principals and parents, the district changed its policy to allow schools to spend fundraising dollars to hire non-licensed staff — tutors and teacher aides, primarily. Hiring licensed teachers with that money isn’t allowed.

When the policy was changed, the district also acknowledged that some schools can’t raise enough money to pay for staff time. To compensate, the district required that schools pay a 10% “tax” on money raised for salaries. That 10% is then distributed among schools where at least 30% of students are low-income.

Medina said he’s OK with the fundraising disparities, noting schools with communities that can’t afford to raise as much money through fundraising also likely get extra resources through grants or federal programs. Asking for more than 10% could discourage giving, he added.

“I don’t think you should ever stifle the parents’ enthusiasm or their willingness to raise money,” he said.

Principals also said they would much rather have adequate funding from the state than put on big fundraisers. But since that’s not the case, they said, they’re grateful the community is willing to help.

Along with the fun run, Heatherwood asks parents to write a check through a direct give campaign and to buy grocery cards or shop through Amazon Smiles, both of which return a small percentage to the school.

“Fundraising is so stressful,” Jaramillo said. “We do it to provide what we feel is appropriate for kids. We really need the money in the classroom. We definitely feel supported by the community. We’re lucky to have the community we do in Boulder Valley.”