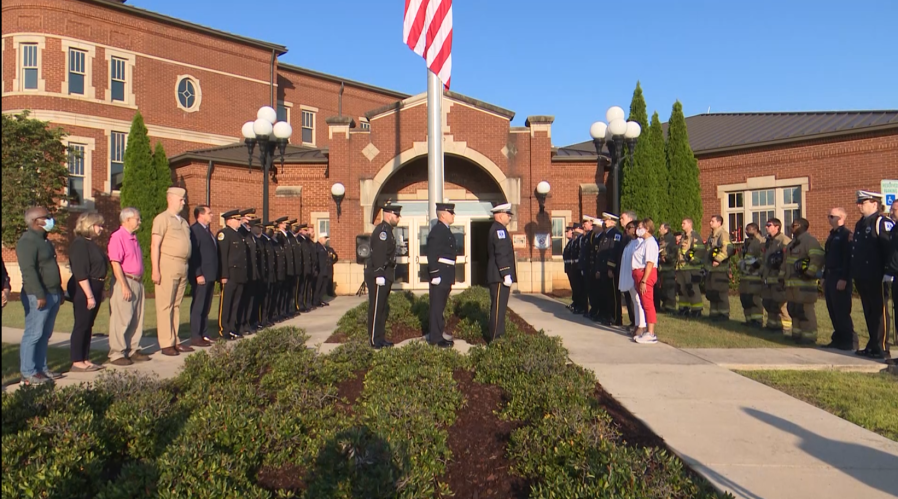 MADISON/HUNTSVILLE, Ala. — On a Tuesday morning in September 20 years ago, people woke up to a regular morning. Some were boarding a flight, others kissing their loved ones good bye before heading to work. None of them thought it would be their last goodbye.

As the nation watched in horror, the United States of America was under attack. Two planes crashed into each of the World Trade Centers and another into the Pentagon. Now, 20 years later many still have the memory of that September morning etched in their minds forever.

Throughout North Alabama, ceremonies were held Saturday to remember the lives lost 20 years ago.
Many gathered to pay tribute at Toyota Field with the presentation of colors by the Madison Police Department and Madison Fire Department, beginning an all-day 9/11 tribute at the stadium.

“I remember I was working late that night serving search warrants with narcotics and I slept in,” Stringer Told News 19. “I picked up my phone and they were telling me, ‘wake up, we’re under attack.”

The Huntsville Police Department, HEMSI, and Huntsville Fire and Rescue and also held a ceremony.

At 7:46 a.m. the sound of sirens could be heard throughout Huntsville, the time the plane struck the World Trade Center. As many bowed their heads in silence with tears in their eyes, it was time for reflection.

Huntsville Mayor Tommy Battle says he remembers leaving breakfast with a friend that morning, when the second plane hit.

Mayor Battle like many others were in disbelief, but he says he never saw so much love come out of tragedy.

“I remember, while we didn’t know what the outcome would be or what was going to happen, people, all different kinds of people came together and leaned on each other and we were united,” Battle stated.

From Huntsville to Madison, tributes could be seen honoring the 2,977 people killed on September 11th. While many people sat in disbelief of what they were seeing that day, others, like Brandon Kroelinger were waking up to watch a loved one be lost.

“One was in the North Tower she worked on the 104th floor for Cantor Fitzgerald, the trading company, and my other friend was on the plane that crashed into the Pentagon,” Kroelinger told News 19.

At the time, he was living on the west coast in California, he says he wasn’t even able to fully open his eyes before he told the towers had been under attack, “I remembered, she works there, she works on the 104th floor,” as he remembered his high school classmate Jeannine Damiani-Jones.

“I got it confirmed by her best friend,” Kroelinger said.

Later on, when he was grocery shopping at Ralph’s in El Segundo, Calif., he ran into his softball coach and he told him the news of his teammate.

“Chandler Raymond Keller was on the plane that crashed into the Pentagon,” Kroelinger said, “I lost it.”

“Later on after this event I’ll go and get flowers from my friends floral shop and I’ll put flowers down at the veterans war memorial in Downtown Huntsville,” Kroelinger said to honor his friends lost.

It’s yearly tributes like these that patriots, first responders and people all over the county can pay their respects whether they knew the victims or not.

“We appreciate the citizens that responded today, that came out with us to honor our fallen,” Stringer said, holding back tears. “Though I have never met any of the men and women from the NYPD that lost their lives that day, 20 years ago… There is still a temporary break in that thin blue line.”

“I remember watching an saying, ‘God I wish I could be there, I’m watching this and can’t do anything,” Stringer concluded.