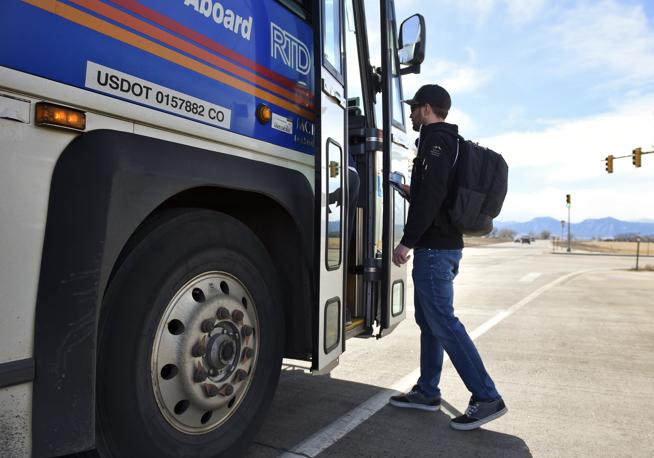 A shortage of bus and light rail operators has RTD officials considering a temporary reduction in its services — an issue which could impact bus routes across Boulder County, though no areas have yet been targeted for cuts.

On Wednesday, RTD leaders hosted a telephone town hall meeting, inviting the public to listen in and provide their feedback and comments. During the conference, officials discussed challenges the transit system has faced, efforts to mitigate them and next steps in creating a solution.

Pauletta Tonilas , an RTD spokesperson, described the operator shortage as a “tough situation.” As a result, some operators have had to work mandatory six-day work weeks.

“This is a situation that puts us (in a place), where we are unable to provide service daily in the way that we should,” Tonilas said. “One of the ideas we have been floating is … do we do a temporary service reduction so that we can match our service reliably to our workforce?”

Tonilas said financial issues are not the cause for the employee shortage, rather it’s a lack of job candidates to fill available positions. Out of 1,085 budgeted positions for bus operators, RTD is 80 people short. RTD also has a budgeted 216 light rail positions and is short 60 people. RTD officials cited low unemployment rates and an abundance of job opportunities as a likely reason for fewer applicants.

During the conference, RTD General Manager and CEO Dave Genova said the operator shortage has existed for about four years. The shortage, he said, has caused delays and dropped runs.

“Believe me, that’s where it hits us,” Genova said. “We do not want to miss any service that we have scheduled, because we want to be 100% reliable.”

RTD has initiated several efforts in the hopes of retaining and recruiting more drivers. According to Michael Ford, the COO for RTD, the transit system has made changes to improve staffing, including creating a collective bargaining agreement with the Union, yearly pay raises and increases in starting pay. According to its website, RTD drivers can make between $19.98 to $25.31 an hour and be eligible for a $2,000 hiring bonus. A CDL license is not required for application.

Recruitment efforts have been somewhat effective. In fact, on Monday RTD will begin the 11-week training process with close to 50 new employees. Roughly 32 are training for the light rail and about 12 arepreparing for bus operator positions. If RTD can get more workers to fill positions, Tonilas said it would reduce the number of people mandated to work six-day work weeks.

RTD has a number of services that provide transit to Boulder County. The Longmont Ride Free Fare Program provides no-charge rides for several local routes. The JUMP, travels from Lafayette to Boulder; the BOLT, which goes from Boulder to Longmont on Colo. 119 and the NB route, which connects Boulder to Nederland and is popular for those who like to ski on the Eldora Mountain Resort.

When asked if proposed temporary service reduction could have an impact on any of these Boulder County operations, Tonilas said it is too “premature” in the planning process to know what routes will be impacted. She emphasized that at this time, there are no concrete plans to reduce services to any routes.

RTD will focus on first gathering public feedback to determine whether a potential cut to services is an option.

On Nov. 21, public input will be shared with the RTD board. From there, the board will discuss how to proceed and create a draft plan by January 2020. Tonilas said public feedback on the draft will also be sought, before a finalized plan is presented to the board in February.

“This isn’t going to happen quickly or overnight,” Genova said. “It’s something that is going to unfold over a matter of months. We want people to feel that and know that … it is part of an overall plan if we move forward with this.”

People can provide RTD feedback via an online survey, which open Nov. 17 at surveymonkey.com/r/RTDserviceinput