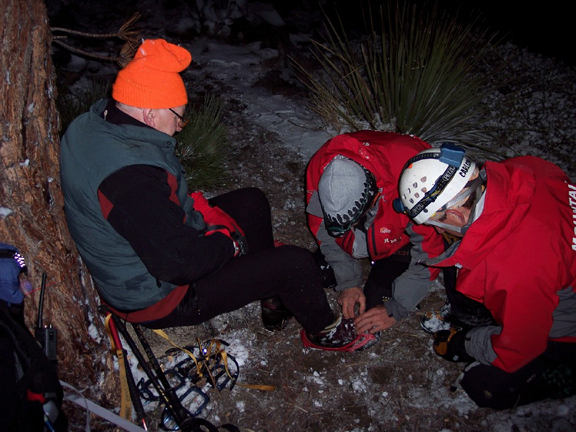 An advocacy group for the Pacific Crest Trail has urged hikers to stay off the path in the San Jacinto Mountains, calling the stretch “extremely dangerous”  with steep snowconditions in the area where one hiker fell to his death and authorities had to make several rescues in the area in recent days.

“Conditions present a serious danger along the PCT on San Jacinto,” the Pacific Crest Trail Association said in a statement that urged hikers to “stay off the trail.” The group tweeted the statement Saturday evening.

Extremely dangerous conditions present a serious danger along the #PacificCrestTrail on San Jacinto. One PCT hiker died in a fall and multiple other rescues of PCT hikers have occurred in the last 48 hours. Stay off the trail. @SanBernardinoNF https://t.co/GMI2ENSDGw

One Pacific Crest Trail hiker died Friday when he fell into a gorge in the area of Apple Canyon Road and Bonita Vista Road. The association said Saturday there had been other hiker rescues, including a helicopter save Saturday of two hikers stuck in ice and snow on the PCT near Mountain Center.

“This kind of rescue work is extremely dangerous for Cal Fire and Riverside County Sheriff’s (Department) aircrews and Riverside Mountain Rescue Unit,” the association said. The rescue unit is a volunteer group.

Steep snow is a mountaineering term for dangerous snow and ice conditions in the high country, where equipment such as crampons and ice axes are needed, along with training for hikers on how to arrest their fall if they slip down an incline.

A series of storms brought snow to upper elevations of the San Jacinto Mountains over the past week, and the National Weather Service forecast more snow Sunday night for the area.

The conditions are normal for early spring in the San Jacinto Mountains, but the association noted, “This year may be worse, and it’s quite possible that conditions will get worse in the coming days.”

The association earlier this month urged hikers to postpone or cancel Pacific Crest Trail plans during the coronavirus pandemic. “This is not the time to be doing risky things outdoors. First responders need to focus on COVID-19,” the Sunday statement said.

The 2,650 mile Pacific Crest Trail starts just north of the Mexican border in California and goes through California, Oregon, and Washington, where it ends at the Canadian border. It is chiefly under the authority of the U.S. Forest Service.