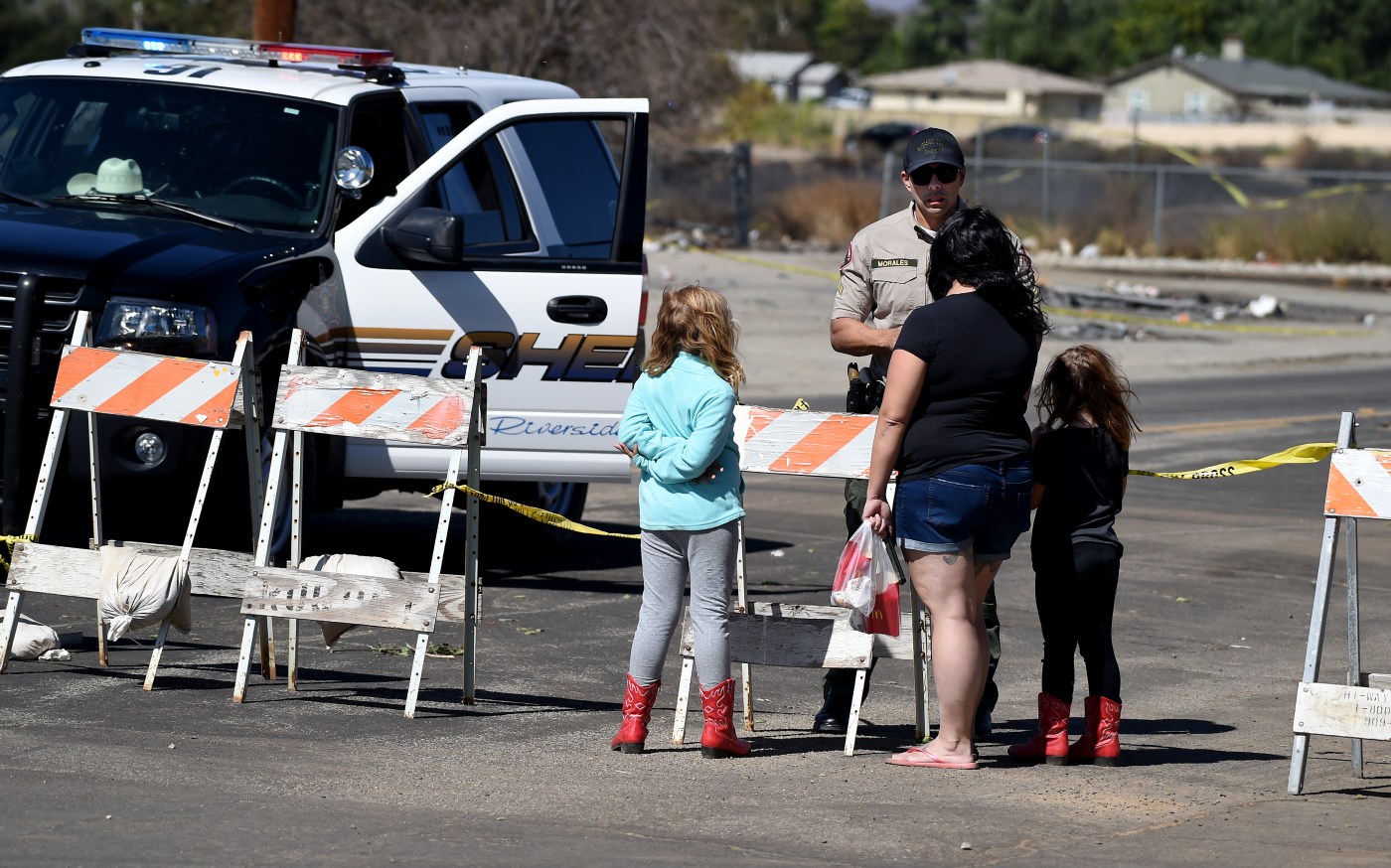 CALIMESA — A brush fire that started near Interstate 10 in Calimesa, which killed two people and charred 1,011 acres, is 77% contained, the Riverside County Fire Department said Sunday.

Firefighters worked overnight to clear more lines of vegetation and shore up existing lines around the brushfire that ravaged a mobile home park near Interstate 10 after the driver of a trash truck dumped his burning load, igniting nearby dry grass.

The body of a second victim was found Friday evening during the search through a burned mobile home and the coroner’s office was working to identify this latest victim, whose age and gender were not immediately known, according to Riverside County sheriff’s officials.

The initial fatality was 89-year-old Lois Arvickson, who lived in the mobile home park and who, her son told reporters, was on the phone with him, preparing to get in her car and leave when the line suddenly cut out.

The blaze, which has destroyed 76 mobile homes, was reported at 1:58 p.m. Thursday at Sandalwood Drive and Seventh Street, near the Interstate 10 exit ramp.

“This was a very rapidly moving fire,” Riverside County Fire Department Division Chief Todd Hopkins said during a Friday news briefing in Beaumont. “It started when a trash truck caught fire, and the burning trash was jettisoned out the back of the vehicle.”

Flames from the burning trash ignited dry grass and spread into the RV park, he said.

County Supervisor Jeff Hewitt, who previously served as the city’s mayor, called it “a very, very difficult day for Riverside County and Calimesa.”

Hewitt said the county Emergency Management Department has issued an emergency proclamation, which the Board of Supervisors is slated to ratify during a special session next Thursday morning to enable the county to apply for immediate state and federal aid.

Mandatory evacuation orders remained in place for residents of the Villa Calimesa Mobile Home Park but were lifted at 1 p.m. Saturday for the area north of the mobile home park. Authorities said residents returning home should use County Line Road as Seventh Street was shut down between Sandalwood Drive and County Line Road.

“That road closure will be in place for quite some time because of the investigation,” the sheriff said, adding that deputies were providing security around evacuated properties to prevent looting.

A temporary shelter for displaced residents was established at Mesa Grande Academy, 975 Fremont St. It was scheduled to close at 2 p.m. on Sunday.

Large and small animals were being accepted at the San Jacinto Valley Animal Campus at 581 S. Grand Ave. Anyone needing help evacuating pets was urged to call 951-358-7387.

The sheriff advised anyone who has information about the fire, or who is from the area and may have other concerns, to call 951-776-1099 and use option No. 5.

The Red Cross requested donations to its Disaster Relief fund to help those impacted. Donations can be made at www.redcross.org, or 800-733-2767.