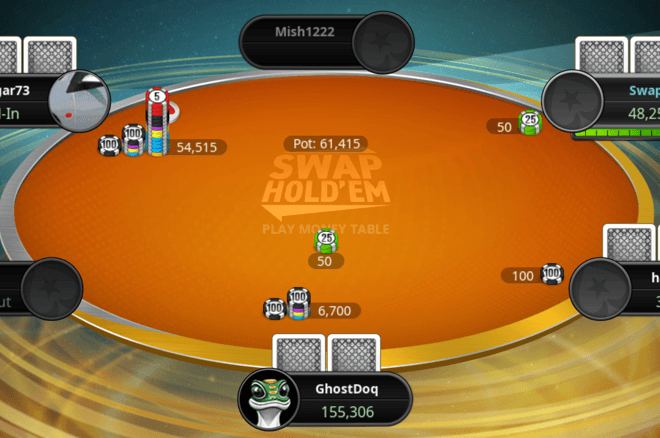 Since the very first poker hand ever dealt, poker players have likely been complaining about the quality of their cards. Now, PokerStars is offering them the chance to do something besides simply moan about their poor luck.

With Swap Hold’em, PokerStars’ latest game creation, players have the option to discard their hole cards — one or both — in favor of new ones.

According to Poker Industry PRO ($), Swap Hold’em is now available worldwide for both play and real money after initially being released for testing in the U.K.

Swap Hold’em looks like regular six-max hold’em, although PokerStars has released special table designs to play host to the game. Players buy in for up to 100 big blinds and post blinds as per usual.

Where things diverge is as soon as the first decision point comes up for each player. Along with regular betting and checking options, players can click one or both of their cards any time it’s their turn. The selected cards will pop up, darken, and have a vague “X” on them. A faded “Swap” button will light up and give players the opportunity to swap out the selected card or cards.

Should the player elect to swap, the cards are thrown away and new ones delivered. A small graphic will appear next to the player’s cards to indicate a swap occurred and how many were swapped.

“Like other new games we’ve introduced on PokerStars, this one presents players with new strategies, and dynamics never previously thought up”

Only one swap is allowed, so players can’t swap one and then decide to swap the other at a later time. The swap can be executed at any time when action is on a player, with the only restriction being the option is lost when a player is all in.

If you’ve swapped, you can hover your mouse over the swap icon and see the old card or cards.

A similar ability was part of Power Up, Pokers’ innovative esports-like offering that was retired last November.

“Like other new games we’ve introduced on PokerStars, this one presents players with new strategies, and dynamics never previously thought up,” wrote Stephen Bartley for PokerStarsBlog.

Indeed, strategic adjustments include when and which cards to swap, and an Omaha-like blocker effect where players can know up to four cards in the deck in order to help with decision-making.

PokerStars released the following video showing the game in action:

Since PokerStars first rolled out a novelty format, Split Hold’em, in March 2018, the world’s leading online poker operator has continued to churn out various games well outside the normal selection of poker offerings.

According to PRO, Swap Hold’em is the eighth such offering to go live, with most staying in the client for about two months.

6+ Hold’em and Tempest Hold’em have been the longest-lived, both having been released in 2019 and remaining in the client through the time of writing. As 6+ Hold’em has been in the client for more than a year, it seems it could be a permanent offering.