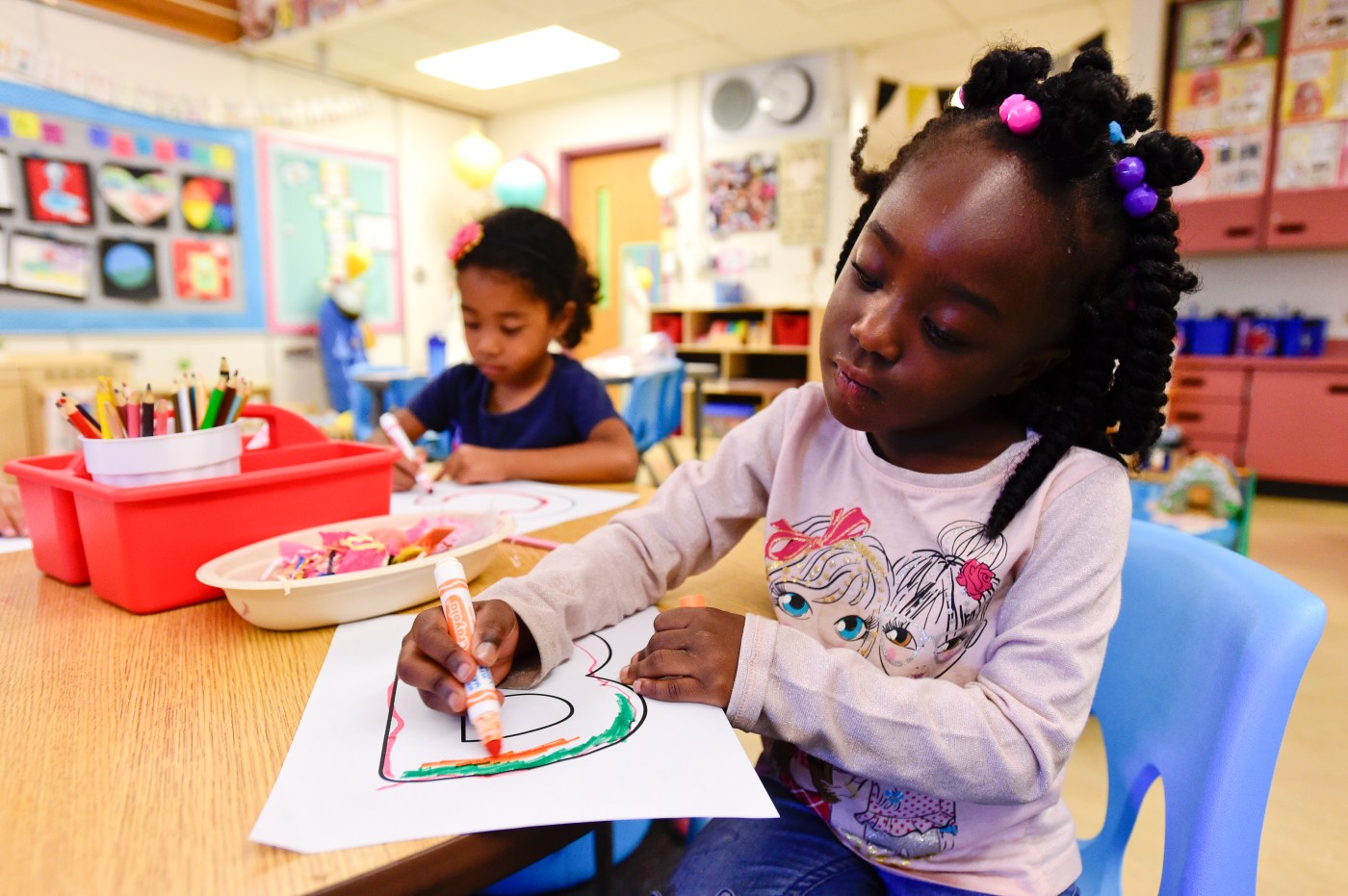 The schedule for kindergartners at Ryan Elementary includes about an hour each afternoon for play.

On a recent day, they built a zoo out of blocks, “cooked” in the play kitchen, told stories with animal figures, negotiated over pieces to build marble runs, drew pictures, looked at books and pushed cars.

As they played, teacher Amber Lewandowski asked them occasional questions, querying one about his picture of a boat and asking another what she was cooking.

Lewandowski has taught kindergarten for a decade, but this is her first full-day class.

When she first switched to kindergarten after teaching middle school, she said, she optimistically hung a sign in her classroom that read “Learning through play and exploration.”

But she took it down after a couple of years. She said the kindergarten standards are so high she had to spend her limited time focused on literacy and math. There wasn’t much time for play and exploration

“I really wanted full day,” she said. “Now, we have time to breathe. I have the same standards, but twice as long to teach them. I’m so excited.”

​The Boulder Valley and St. Vrain Valley school districts are providing tuition-free full-day kindergarten this school year after the state Legislature agreed to a proposal from Gov. Jared Polis.

The Legislature approved spending $185 million on full-day kindergarten, using money from a windfall of about $274 million in the state budget thanks to a strong economy.

Before, the state only paid for a little more than half a day of kindergarten, leaving school districts to figure out how to cover the remainder of the cost to meet parent demand.

At the rest of the schools, parents could enroll children in a tuition-based kindergarten enrichment program.

Parents who still want half days have the option of pulling their children out at lunch, but no longer have the option of a separate half-day program. Boulder Valley officials said just five kindergarten students districtwide leave early.

Full-day kindergarten also likely is bringing to the district parents who would have enrolled in private kindergarten programs.

Last school year, based on the official October count numbers, Boulder Valley had 1,860 kindergartners. As of Sept. 4 this year, kindergarten enrollment was up to 1,896.

Because some schools already offered full-day programs, the district had an instructional model ready.

The district rolled out that model to all its schools this August after providing seven days of training over the summer to its new full-day teachers. Topics included incorporating music and movement, incorporating intentional play and developmentally appropriate practices.

“The instructional model is just as important as the amount of time kids get to spend in kindergarten,” said Robbyn Fernandez, an area superintendent. “They cannot just sit in chairs and get (instruction). They have to move, sing, interact and practice. They need varied experiences with all five senses.”

One of the big components of the district’s model is intentional play.

“It was so seamless,” said Jeff Hillis, a kindergarten teacher at Boulder’s Crest View Elementary.

The district set aside about $600,000 for new furniture, play kitchens, blocks, art supplies, books and other materials, along with $100,000 for teacher training. About $4 million, coming from state funding, is covering the salaries of 30 additional kindergarten teachers, with another $1.1 million paying for more aides to support classrooms.

At Ryan, Lewandowski added a play kitchen to her room with the materials money. She already had a train table she bought at a garage sale, plus a Lego table donated by parents.

On a recent day, she read a construction-themed alphabet book, then asked her 21 students to decorate a letter of the alphabet using markers, colored pencils, tissue paper, pom poms, feathers and other art supplies.

“We’re going to review how to open the glue,” she said. “What do you say? Dot, dot, not a lot. If you use a lot of glue, your paper will get soggy.”

As they worked, she helped them with taking turns as they shared the supplies and encouraged them to write their names on the letters, which will be displayed in the hall.

This was her first time trying the letter art project. In a half-day program, she said, there wasn’t time for bigger, messier projects.

She also has more time to “front-load” skills and background knowledge, letting students practice drawing stars, hats and cats, for example, before a math activity where they’re asked to draw different numbers of those shapes.

Ryan Elementary saw its kindergarten enrollment grow from 78 students at the end of the school year to 83 in August.

The increase was enough that the school needed a fourth kindergarten classroom, with Principal Cameo DeDominces hiring another teacher in the first week of school.

Because of space issues, DeDominces said, the fourth kindergarten class took over the music room, and the school will get a portable classroom for music. In the meantime, the music teacher goes to each classroom.

At Crest View, Principal Hollene Davis said kindergarten enrollment is up from 77 students last year to 91 this year. She said one of the highlights of the change to a full-day program is it’s more equitable.

While many students attended for the whole day through the kindergarten enrichment program, she said, not all families could afford the tuition.

“It really is creating a similar experience for all students,” she said. “It’s magical for kids to have these opportunities.”

In the half-day program, Crest View kindergarten teacher Erin Cameron said teachers only had about an hour and 40 minutes to teach literacy and math. More time gives them the opportunity to practice and revisit what they’re learning, she said.

“It’s a total game changer,” she said. “We can stretch their learning. It’s the gift of time we’re able to give kids.”