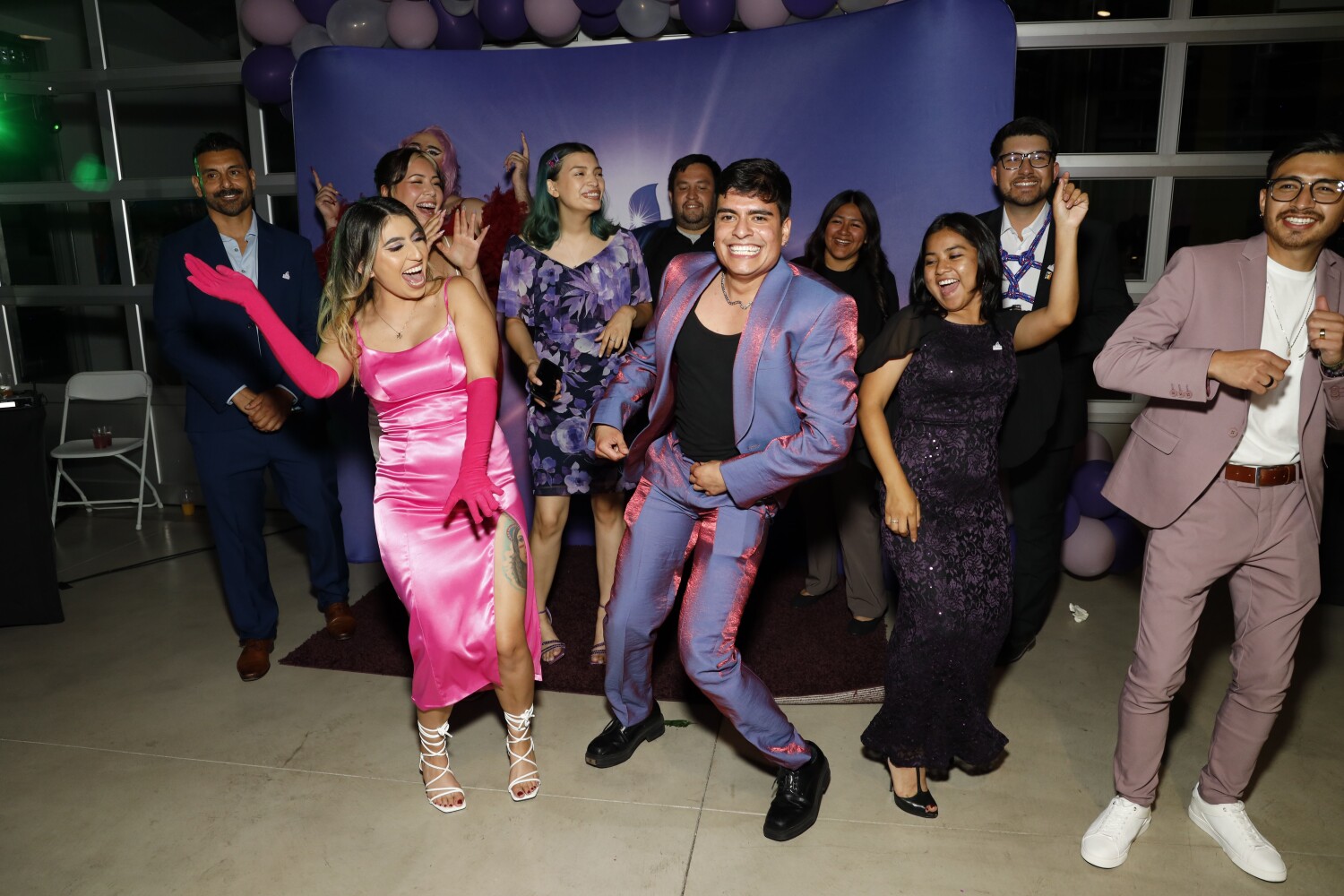 A sea of audience members cheered as Ridge and Toni Garcia belted out their rendition of “Vamanos,” a ranchera immortalized by the late Mexican-Costa Rican singer Chavela Vargas.

They called the song — which details the pain of being in love despite harsh social judgment — the “lesbian anthem.”

Facing a crowd of nearly 300 friends, activists and leaders of L.A.’s Latino LGBTQ community gathered Thursday at Studio-MLA, a landscape architecture firm, they turned their acoustic guitars toward one of the night’s honorees, Nancy Valverde.

“This is for you ,Nancy,” Ridge said. Garcia and Ridge have been friends with Valverde for nearly three decades.

In the 1960s, the Chicana lesbian was arrested several times by the Los Angeles Police Department for wearing men’s clothing in public spaces throughout L.A., a violation of so-called masquerade laws. By working with her lawyer, she was able to put a stop to the arrests. But, she said, she continued to face harassment from police officers taunting her outside her barbershop by knocking their nightsticks on the windows.

At the Purple Lily Awards, hosted by the Latino Equality Alliance to honor the local Latino LGBTQ community, Valverde, 90, was recognized for her commitment to preserving her own identity amid discrimination.

As Ridge and Garcia serenaded her, Valverde joined in. Her partner, Andi Segal, stood by her side as she was presented with the Lifetime Achievement Award.

“I’ll tell you what, I’m very proud,” Valverde said in an interview. “I really put my ass on the line for so many years. In my day, everybody was in the closet. It wasn’t easy to be out there alone.”

And even though there has been significant social progress since the 1960s in advancing LGBTQ rights, Valverde said, there is still much work to be done. The reversal of Roe vs. Wade by the Supreme Court is bringing into question whether same-sex marriage might be next.

“We’re still not where we should be,” she said.

Although she was born in New Mexico, she has lived primarily in Los Angeles and currently resides at Triangle Square, which has been identified as the first senior citizen center serving the LGBTQ community in the United States.

Among the evening’s other honorees were several who have worked to develop and promote fair and inclusive spaces for Black people, Indigenous people and people of color within the LGBTQ community in Los Angeles and across the state.

They included Monica Trasandes, director of programs, Spanish-language and Latinx media, at GLAAD; Michaé De La Cuadra, manager of policy and community engagement for the TransLatin@ Coalition; Alan Acosta, director of strategic initiatives at the Los Angeles LGBT Center; and the team at ABC 7 Los Angeles.

“If I could, I would do a little ‘Mean Girls’ moment where I break [the award] off and be like, ‘We all deserve it,’” De La Cuadra said while receiving their award.

But, above all, the ceremony served as a way to bridge different elements of Latino and LGBTQ cultures.

Conchas, traditional Mexican sweetbreads frosted with the distinct colors of pride flags representing various identities within the LGBTQ communities, were passed out to attendees.

Artwork from Hector Silva, an L.A.-based artist whose sketches often explore the intersectionalities among queer and Latino identities, was on display and for sale through the event’s silent auction.

And throughout the event, Latin music blasted through speakers. Attendees moved their hips to cumbia while friends and colleagues chatted in Spanish.

“It’s just really great to have a space to ourselves where we can feel celebrated,” said Sor Loose Clarita, a sister with the Los Angeles Sisters of Perpetual Indulgence, a nonbinary “Order of 21st Century Nuns” that, in the words of its website, was “founded to bring flamboyant hilarity to serious causes and to amplify voices needing a power lift.”

The seventh annual event, which began in 2016, serves as one of the Latino Equality Alliance’s primary fundraisers of the year.

Money raised through ticket sales and the silent auction during the event is donated to several charities and organizations throughout Los Angeles that advocate for mental health services and social justice for the LGBTQ and Latino communities.

A four-member committee selected this year’s honorees from a range of fields including entertainment, government, corporate and public sectors.

Because of the COVID-19 pandemic, the annual gathering took place virtually in 2020 and 2021. Marco Gonzalez, who serves as advisory board chair for the Latino Equality Alliance, said health and safety precautions were taken into account in planning this year’s festivities.

“This exceeded our expectations with the number of people that showed up,” Gonzalez said. “I think everyone was ready to come and celebrate. People love this awards ceremony because it’s so meaningful.”

With each passing honoree who accepted their award, the crowd cheered and applauded.

“We’ve waited three years for this, all we ask is for 30 minutes of your time,” LEA Executive Director Eddie Martinez said to the crowd, whose cheering and noise were keeping the remaining half-hour of the ceremony from continuing.

De La Cuadra emphasized that spaces for LGBTQ people and Latinos are essential because members of these communities often face discrimination and other barriers, particularly immigrants without legal status.

“To have a space that celebrates me as a Latina trans woman is really special,” De La Cuadra said.

De La Cuadra received recognition this year for their work through the TransLatin@ Coalition and in advocating for the passage of the Transgender Wellness and Equity Fund, which paved the way for a first-of-its-kind, $13-million state equity fund for healthcare services for transgender, gender-nonconforming and intersex Californians.

Gov. Gavin Newsom signed the bill for funding in September 2020.

De La Cuadra noted that awards ceremonies serve as stepping stones, but that the need to fight for LGBTQ rights is far from over.

“There’s still so much work that needs to be done,” they said.