Previous Next
Thousands of firefighters battle blaze as it moves toward Healdsburg, evacuations ordered across Sonoma County – San Bernardino Sun 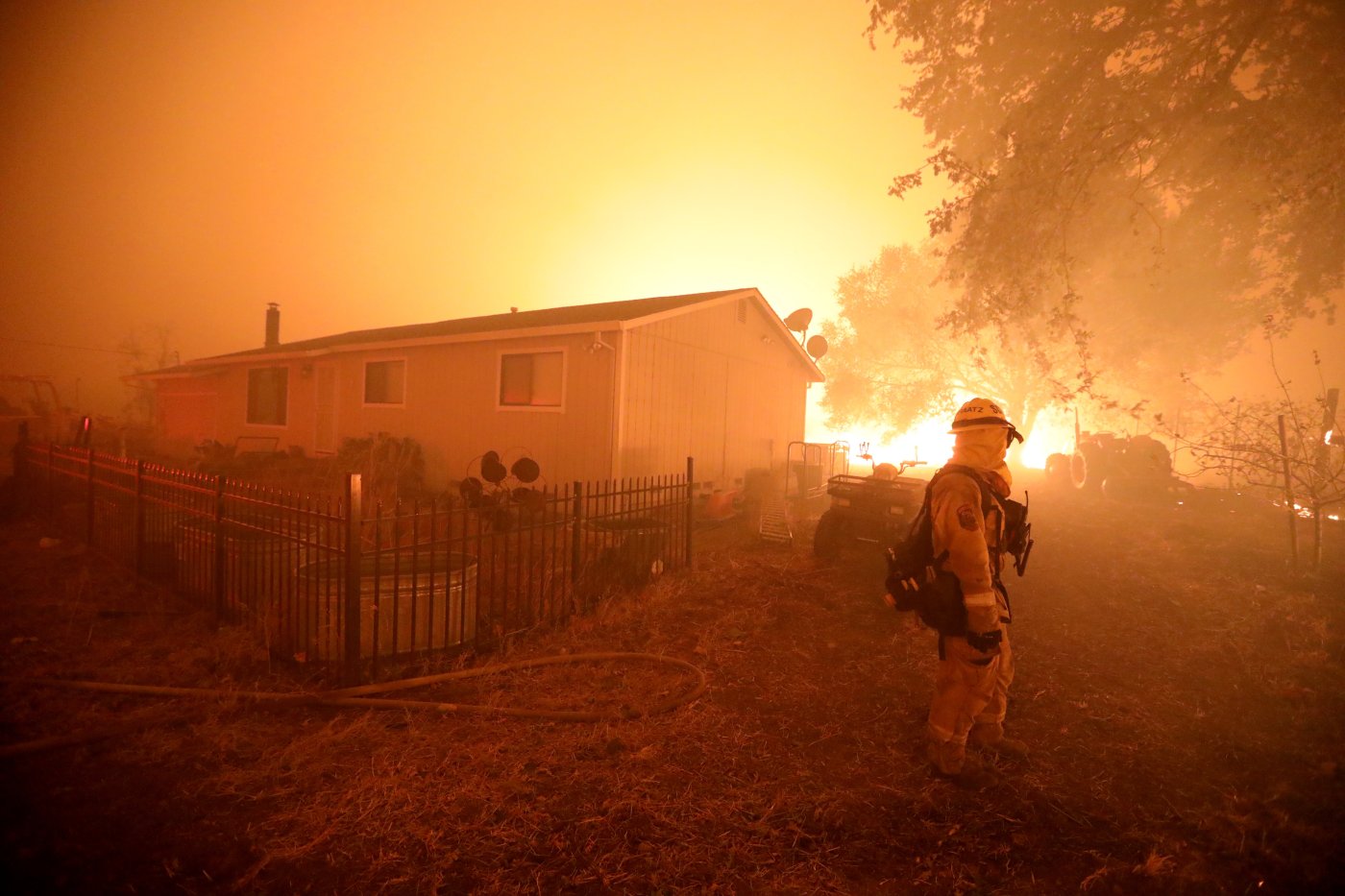 SANTA ROSA — Fierce winds drove across Sonoma County early Sunday morning, pushing the massive Kincade Fire further south into the wine region as authorities ordered thousands of additional residents to evacuate and get out of the path of the rapidly-moving wildfire.

By 7 a.m. Sunday, the fire had consumed 30,000 acres and was 10 percent contained — growing more than 4,000 acres overnight as firefighters struggled to control the flames.

In the largest evacuation issued in Sonoma County history, more than 180,000 residents have been ordered to flee the area.

No injuries have been reported so far, though 79 structures were reported destroyed, including 31 homes, and 14 structures have been damaged. Officials say nearly 23,500 structures are considered to be threatened by the fire.

Peak wind gusts of 93 miles per hour were recorded at about 6 a.m. Sunday morning in the Healdsburg Hills north of the towns of Healdsburg and Windsor — aiding the expansion of the fire and igniting several spot fires as embers blew ahead of the primary blaze.

“It’s the strongest winds that we’ve seen in quite some time,” National Weather Service meteorologist Anna Schneider said. “And the fire has spread quite a bit overnight as a result of those winds.”

Bursts of winds up to 85 miles per hour were expected to keep blowing until mid-Sunday morning before briefly picking up again in the evening.

Flames sprang up on the west side of Highway 128 in the Alexander Valley, tearing through several storied wineries as violent winds whipped grapevines, signposts, and trees, filling the roadway with debris.

The tasting room and main building of the Soda Rock Winery caught fire around 3 a.m., and was fully engulfed by flames within an hour, filling the air with percussive booms as the fire ripped through the structure and blew out its windows.

“The wind has pushed the fire through the building,” said Rhett Pratt, a CalFire firefighter and spokesperson for the Kincade Fire. “Like any fire does when you blow on it, it increases in speed and intensity.”

Bracing for the vicious winds they predicted — accurately — would fuel the wildfire, Sonoma County officials had earlier urged residents in evacuation zones, stretching from the inland foothills to the coast, to leave their homes while there’s still time.

“We have a lot of work on our hands, and we’re not going door-to-door dragging people out,” Sheriff Mark Essick said at a Saturday evening news conference. “It truly is a selfish act to stay home.”

In all, more than 180,000 people have been ordered to evacuate from the fire zone. The mandatory evacuation areas now include Dry Creek Valley including the upper portion of Westside Road and Mill Creek Road; Larkfield and the Mark West Drainage; and all areas west of Healdsburg and Windsor, throughout the Russian River Valley to Bodega Bay.

The evacuations were expanded again early Sunday to include most of Santa Rosa, as well as Sebastopol, Bloomfield and Valley Ford, and all areas west of Fulton Road, Llano Road, and Pepper Road to the Marin County line.

The area included the Coffey Park and Fountaingrove neighborhoods that were ravaged by the 2017 Tubbs Fire.

Cox added that fire lines have been dug as part of an “aggressive assault on the ground to build containment line for the anticipated wind event.”

Cal Fire division chief Jonathan Cox emphasized, as others have, that those who do not heed evacuation calls are endangering themselves and the first responders who will be dispatched to rescue them. He noted that even the more than 2,800 well-equipped firefighters will be significantly hampered by a blaze that may be whipped around by wind gusts of up to 80 mph.

“The fire intensity has the potential to overwhelm even the professionals,” Cox said.

In issuing evacuation warnings for Santa Rosa and other areas hard hit by the Tubbs Fire, Essick referred to what happened two years ago as a reason to take the warnings seriously:

“In October 2017, we lost 24 lives in Sonoma County because we didn’t have a warning. We now have a warning … You cannot fight this. Please evacuate. If you are under an evacuation order, you must leave.”

“This event, unlike in 2017, we have had, and continue to have time,” he said. “Evacuations are not suggestions. If you are in the evacuation zone, you are in the path of danger.”

Officials at Sutter Santa Rosa Regional Hospital heeded that call and were clearing out the facility Saturday night after the latest orders placed them at the edge of a mandatory evacuation zone. The hospital was forced to do the same two years ago with the Tubbs Fire bearing down.

Hospital spokesperson Shaun Ralston said 97 patients were being evacuated, including eight babies being treated in the neonatal intensive care unit.

“They’re all relatively healthy,” Ralston said of the infants.

In a darkened cul-de-sac within line of sight of the hospital, 64-year-old Gary White was the last resident remaining at Mark West Village, a subdivision built a year ago in the wake of the Tubbs Fire. White considers himself the “unofficial” mayor of the development, and said he wanted to ensure his neighbors were evacuated safely before he headed out.

By 10 p.m. Saturday, that time had come, just as deputies were driving through, horns blaring, to get people to leave the area.

“It’s a pretty weird night,” White said. “I lived through the Tubbs Fire and I wanted to protect my neighbors.”

Not far from there, the Sheriff’s Office had been transporting inmates at its secondary jail, the North County Detention Facility south of Windsor, 90 miles south to Alameda County’s Santa Rita Jail in Dublin.

All inmates at the North County Detention Facility in Santa Rosa have been evacuated and are being safely housed in Alameda County.

Essick said everyone in Healdsburg and 95 percent in Windsor received evacuation notifications. All who could be seen in Healdsburg were local police patrolling the streets, buoyed by patrol units sent up from agencies including San Francisco and San Bruno.

The searing memory of the 2017 Wine Country Fires are interwoven with the efforts to move people out of the fire’s way.

“We are taking extreme precautions and making aggressive evacuation decisions based on the forecast. We are providing defense for communities that may be impacted,” Cox said. “It’s only successful if the public who are asked to evacuate leave the area.”

Pat Sherman, 68, and her husband Craig Allison, 67, who’ve lived in Windsor together for 20 years, arrived in the parking lot of the Petaluma Memorial Veterans Hall shelter Saturday afternoon, where they planned to stay during the evacuation.

The couple has three large dogs — Keith, Ronnie, and Cookie — and said they might sleep in the car Saturday night as the space for pets in the hall seemed limited. They tried unsuccessfully to rent a room at a motel in Santa Rosa, as a manager told them there was a two-dog limit. The couple evacuated as a precaution during the Tubbs Fire.

“Hoping it remains,” Allison said of his home. “I like to pre-visualize about pulling back into the driveway.”

“I could put on a happy face, it’s very easy,” Sherman said. “But when it comes down to it, I could lose my home, my memories of my parents, everybody. And you can’t bring that back.”

Check back later for updates to this story.