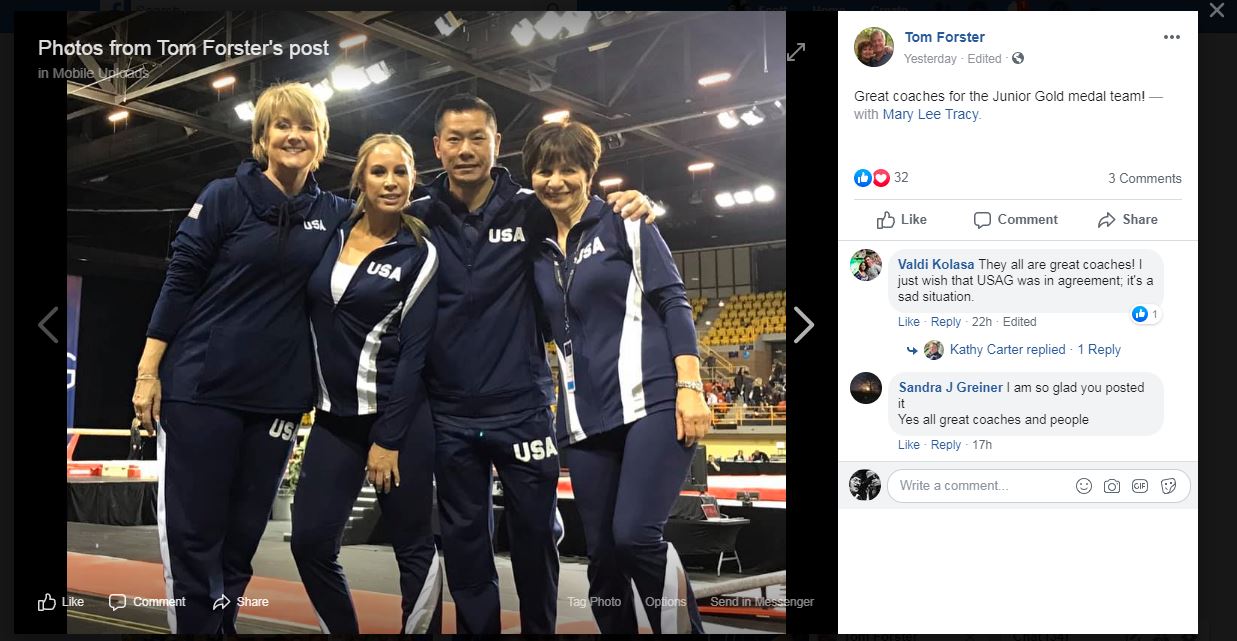 Tom Forster, USA Gymnastics women’s national team coordinator, posted a series of photos of that included suspended coach Maggie Haney on his Facebook page Wednesday in which he referred to Haney and other Team USA coaches as “great.”

The posts were made on the eve of the final day of USA Gymnastics eight-week hearing on whether to suspend Haney, the coach of Olympic and World champions, for verbal and emotional abuse.

Haney is alleged to have screamed and cursed at, threatened, bullied, and harassed more than a dozen gymnasts on a regular basis at MG Elite Gymnastics, a club in a New Jersey suburb of New York City, according to interviews and USA Gymnastics documents obtained by the Southern California News Group. Haney is also alleged to have told injured gymnasts to remove medical devices such as boot casts and continue training and competing, according USA Gymnastics documents and interviews.

Forster has been aware of concerns the parents of World champion Riley McCusker had about Haney since at least the spring of 2019 and had intervened on behalf of McCusker during interactions with Haney at U.S. national team camps, according to documents obtained by SCNG.

Forster posted at least four photographs that included Haney on his Facebook page Wednesday, in a post that began, “My heart sank for all our athletes with the official news of the Olympic postponement,” and ended with “Here are some of my favorite pics from our travels together in this Olympic cycle. Enjoy. Be healthy and safe!”

Tracy was forced to resign as national team coordinator in 2018 after just three days on the job.

Tracy’s exit came after USA Gymnastics officials said she improperly contacted Olympic champion Aly Raisman, who is suing the organization. Raisman, who was sexually abused by former USA Gymnastics and U.S. Olympic team physician Larry Nassar, had criticized Tracy’s appointment because of Tracy’s support of Nassar when allegations of his sexual misconduct began to surface.

Forster also posted a photograph of Haney and other Team USA coaches toasting at the 2018 World Championships in Doha.

USA  Gymnastics officials and Haney’s attorney were scheduled to make their closing statements Wednesday in the abuse hearing. A ruling is expected in the next two weeks.

Haney was suspended by USA Gymnastics in February pending the outcome of her hearing. She is not allowed to have contact with minor-aged gymnasts.

Victoria Levine, a coach and co-owner of MG Elite, was placed on an interim suspension by USA Gymnastics  March 17 and prohibited from having any unsupervised contact with minor-age athletes while the organization investigates allegations of verbal and emotional abuse against her.

Olympic champion Laurie Hernandez and at least a half-dozen families have filed complaints with USA Gymnastics against Haney, according to USA Gymnastics documents and six people familiar with the cases.

The allegations against Haney “are patently false,” said Russell Prince, her attorney,.

Hernandez reported complaints against Haney to Rhonda Faehn, then USA Gymnastics senior vice president for the women’s program, shortly after the 2016 Olympic Games.

McCusker, like Hernandez, had trained with Haney at MG Elite in New Jersey before relocating to Arizona a few days after Haney was suspended.