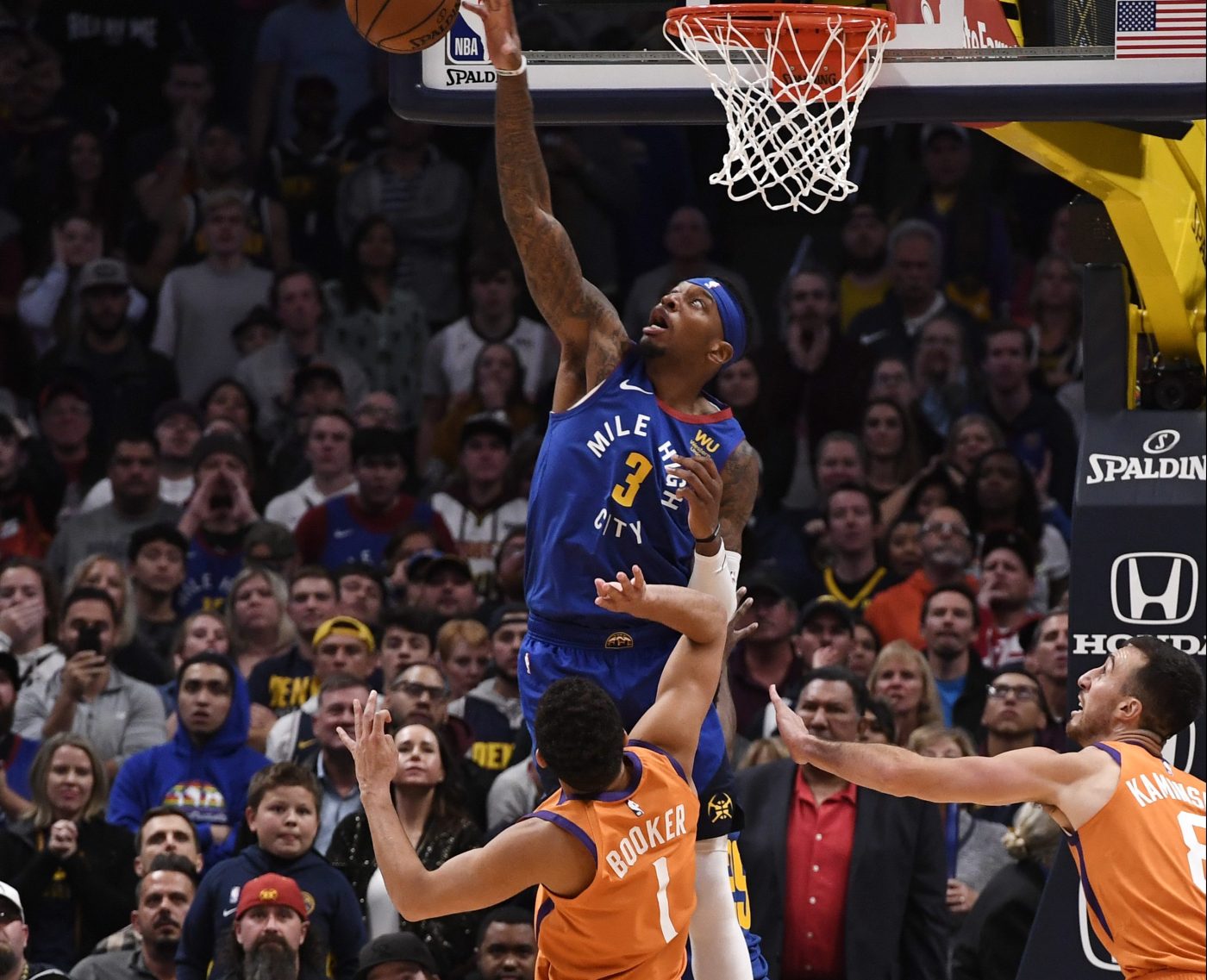 The Nuggets spoke all Friday about not overlooking the Phoenix Suns. It took a half before that mindset kicked in, and even then it took overtime to decide the result.

Ultimately, defensive stalwart Torrey Craig swatted away Devin Booker’s last-ditch layup and the Nuggets survived a thrilling 108-107 game against the Suns to improve to 2-0 on the season.

The Suns, who fouled out three different players in the overtime session, led 107-106 with 19 seconds left in overtime before Jamal Murray buried two clutch free throws to reclaim the lead. That set the stage for Craig’s heroics, who overshadowed Nikola Jokic’s first triple-double of the season.

Ugliness aside, Nuggets coach Michael Malone was impressed with his team’s resolve.

“At the end of the season, this is gonna be on the right side of the column,” he said.

After his timing and anticipation on the block, Craig collapsed on the court as his teammates rushed the floor.

But turnovers and fouls made Friday’s home opener far closer than it needed to be. It nearly resulted in complete disaster.

Malik Beasley fouled Suns point guard Ricky Rubio with 1.8 seconds remaining in regulation as he tossed up a halfcourt prayer. It was the low point of a fourth-quarter meltdown. Rubio sunk all three free throws as the crowd groaned.

It offset what had been a spectacular quarter for Beasley, who sunk two clutch 3-pointers for what appeared to be a secure margin.

Heading into the game, the hope was that Friday’s rowdy crowd might provide the same home-court advantage they enjoyed last season, when they owned the NBA’s best home record at 34-7.

But despite the massive production from Jokic, the Suns hung around throughout the entire fourth quarter. Phoenix trailed 90-89 with 43 seconds remaining even without Deandre Ayton, their inside anchor, who was banned 25 games for a failed drug test.

In the third quarter, the Nuggets finally meshed a sound defensive effort with their dynamic offense. Denver held the Suns to just 17 points while Jokic and Murray leaned on their chemistry. Murray found his All-NBA center for a perfect wraparound pass through traffic that Jokic converted.

Nuggets shooting guards Gary Harris and Malik Beasley supplemented the offense with 13 points of their own as Denver seized a 64-62 lead heading into the fourth. Beasley’s highlight reel dunk was almost as good as the two electric jams Jerami Grant offered in his home debut. In the second slam, Grant flew in for an ricochet rebound and stuffed the ball home early in the fourth.

After Wednesday’s encouraging season opener in Portland, Malone was careful not to extract too much. He didn’t want to make any grand declarations, but he did illuminate his thought process on his team’s growth, at least for the early portion of the season.

“I don’t know if there’s a magic number, after 10 games, but I think as a coach you’re always constantly reflecting, analyzing, observing, what’s working well, what’s not working well, how can I help a certain player find his rhythm,” Malone said. “That’s the job, it’s not just calling plays. It’s constantly looking to see where we’re at.”

Malone took note of the Suns’ aggressive defense in their season-opening win against Sacramento and was rightfully concerned about their physical defenders.

“To me, (turnovers are) the key to the game,” Malone said during his pregame news conference. “If this game is an ugly game, if it’s a rat race, a track meet, whatever you want to call it, that’s going to be to their advantage. So the key is they have guys that are really good defenders, they get into you, that are long, that are active. We have to trust the pass tonight and we cannot play in crowds. If we try to play in tight spaces, we’ll get into trouble.”

His concern was justified, as the Nuggets played the first two quarters with a stagnant, disjointed offense that yielded just seven assists.

Denver’s sweet shooting from its season opener all but evaporated in the first half of Friday’s contest. The Nuggets committed 10 turnovers, a persistent issue throughout the preseason, and couldn’t connect from 3-point range despite plenty of open chances. They trailed 45-39 at halftime, while shooting just 35% from the field.

Even without Ayton, Suns big men Aron Baynes and Frank Kaminsky led a concerted attack in the paint. Phoenix owned a 26-22 advantage inside over the first two quarters and Suns starters outrebounded Denver’s starters 19-12.

Only a strong finish to the half from Jokic and Murray kept it close. The two combined for 18 points and 9 rebounds but undermined the offensive flow with seven turnovers.