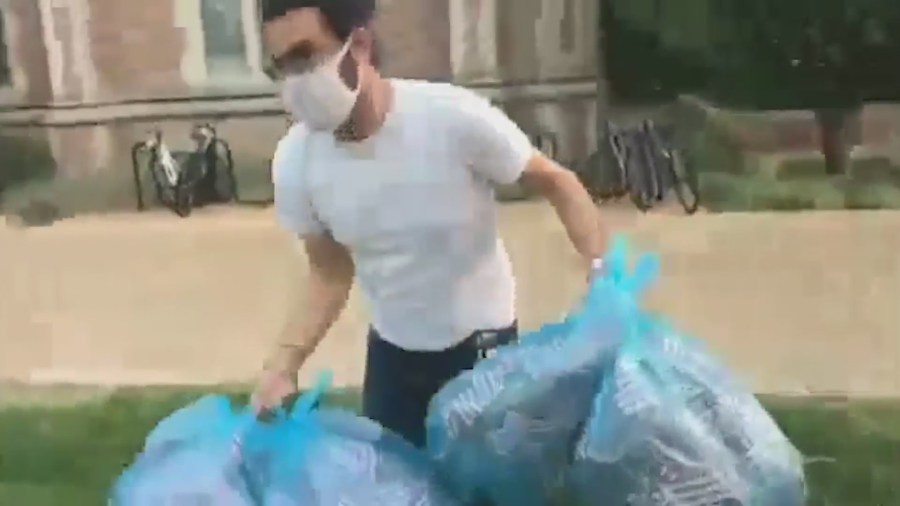 ST. LOUIS — Video of a person removing 9-11 memorial flags on Washington University‘s Campus is causing outrage after it goes viral. Now, one organization is demanding action.

“I couldn’t help but be shocked as an American I couldn’t believe that somebody would disturb the memorial to those who have died,” said Nathanial Hope, a member of the school’s College Republicans.

Hope was one of many in the group who spent hours placing more than 2,500 American flags on Mudd Field commemorating September 11.

“I had to act, I knew the most peaceful thing to do was just to record the situation,” said Hope.

He went to see the display and saw this student and started recording with his phone.

The situation was a student removing the flags that were placed. The video has been seen and shared millions of times on social media. It’s even made national headlines.

The Washington University Chancellor released a statement to the school’s community saying in part:

“We are taking appropriate steps to investigate this incident and will follow our standard protocols as we do so. Such steps often take time. As we move forward, we will also ensure that the student involved has access to campus resources that are regularly available to students as he navigates the consequences of his actions, both on campus and beyond.”

Rodriguez and Hope say they appreciate the chancellor’s swift response and their communication has been great.

Rodriguez feels the student should be punished.

“I have been pushing and believe the optimal punishment should be expulsion from this university,” said Rodriguez.

Hope shared this video of American flags found in a trash can but it’s unclear if it’s the same student.
Rodriguez says the incident overall was a blatant act of disrespect.

“This moment was never meant to promote any sort of Republican or Conservative message. It was just meant to share respect for those who are never going to get to come home again,” said Rodriguez.