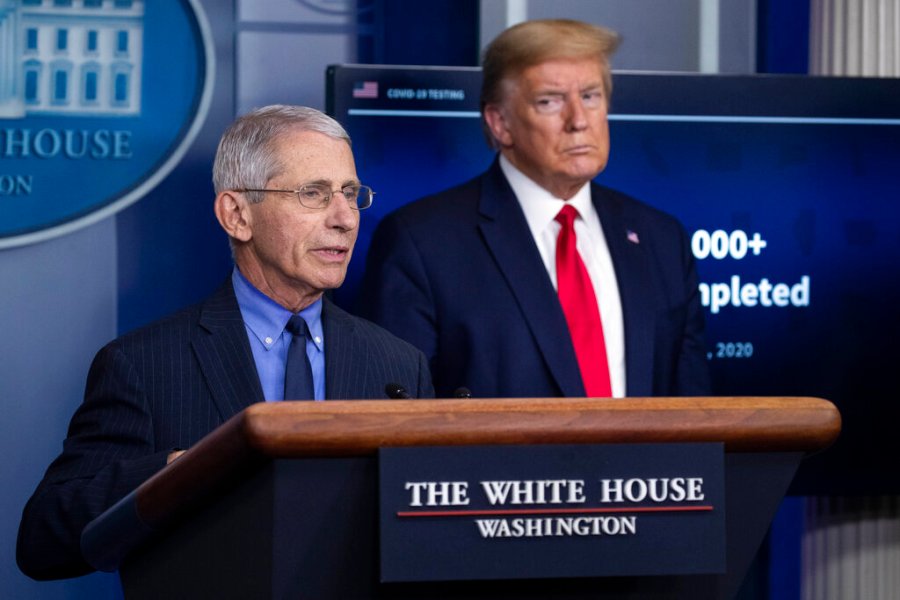 The briefing is tentatively scheduled for 5 p.m. Eastern and can be streamed live right here.

President Trump, in a roller-coaster week of reversals and contradictions, told governors to “call your own shots” on lifting stay-at-home orders once the coronavirus threat subsides. But then he took to Twitter to push some to reopen their economies quickly and tell them it was their job to ramp up testing.

“This is mayhem,” New York Gov. Andrew Cuomo said Friday. “We need a coordinated approach between the federal government and the states.”

In the absence of one, Cuomo and sixteen other governors representing half the nation’s population have organized three separate clusters of states each committed to working together on the details of relaunching businesses, schools and events while avoiding a resurgence of infections.

The pacts have formed among states mostly with Democratic governors on the West Coast, around the Great Lakes and in the densely populated Northeast, covering several big metropolitan areas that cross state lines, including New York, Chicago and Philadelphia.

With commuters using interconnected trains in the Northeast and family connections, vacation travel and tech hubs linking the West Coast states, California Gov. Gavin Newsom says the teamwork recognizes “that this pandemic virus knows no boundaries, knows no borders, you can’t build walls around it, and you can’t deny basic fundamental facts.”

Others are going their own way, including the second most populous state — Texas — where Gov. Greg Abbott said Friday that he would ease some pandemic-related restrictions next week. Florida, another state with a huge population, is also not in an alliance.

Their efforts are starting in the shadows of high-profile disputes between some governors and Trump, whose message has changed frequently during the pandemic. The partnerships were announced as Trump asserted “total authority” over when states lift restrictions.

He then deferred to governors as he issued broad guidelines for reopening economies over time in places with extensive testing and decreasing cases of the virus. But by Friday, he was tweeting support for those protesting stay-at-home orders in Michigan, Minnesota and Virginia and arguing that “States have to step up their TESTING!”

Republican and Democratic governors said they would be cautious on reopening and warned they won’t be able to expand testing without help from the Trump administration.

Addisu Demissie, a Democratic strategist who managed Newsom’s 2018 campaign, said the alliances are “largely an acknowledgement that the federal government is not going to get done what the states need to get done.”

Richard Besser, a former interim director of the U.S. Centers on Disease Control and Prevention, said the federal guidelines had many good points. But “there are some other components that aren’t there, such as the availability of widespread testing capacity,” said Besser, CEO of the health-focused nonprofit the Robert Wood Johnson Foundation and a New Jersey representative in the Northeast partnership.

David Postman, chief of staff for Washington Gov. Jay Inslee, said cooperating with California and Oregon — which also coordinate during wildfire season — would probably happen regardless of the Trump administration’s approach.

“It just seemed that working together more closely would be more helpful to us,” he said.

While there are key differences between the states, Oregon Gov. Kate Brown said people “work in Oregon and live in Washington and obviously the reverse. And the same is true with California.” She also said it would be “extremely useful” to coordinate instead of compete for protective equipment.

The alliances could prevent difficult situations: For example, Ohio allowing nonessential employees back into Cincinnati while schools and day cares in suburban northern Kentucky remained closed. They could prevent issues such as commuters riding on New Jersey Transit trains without masks but finding they’re required to get on subways that take them the rest of the way to work in New York City.

The efforts are just getting started, so it’s not yet clear how coordinated state action ultimately will be.

The West Coast states say it’s important to coordinate the metrics used to determine when it will be safe to start reopening. The Northeast alliance is expected to draft a report.

Not everyone praises the teamwork.

In Connecticut, Republicans have criticized Democratic Gov. Ned Lamont for not having his own reopening plan.

“If governors want to consult with one another, that can be helpful, but Connecticut cannot wait on six other states, including states that do not even share a border with us, to agree on a path forward,” state Senate Republican Leader Len Fasano said in a statement.

Pennsylvania’s GOP lawmakers have criticized Democratic Gov. Tom Wolf for stay-at-home orders and working with other governors. They even advanced a measure to strip him of some power to determine which business sectors can remain open, which he’s promised to veto.

Governors emphasize they have the final decision on reopening their states.

Indiana Gov. Eric Holcomb, a Republican, described the pact as a way for state leaders to know what the others are doing.