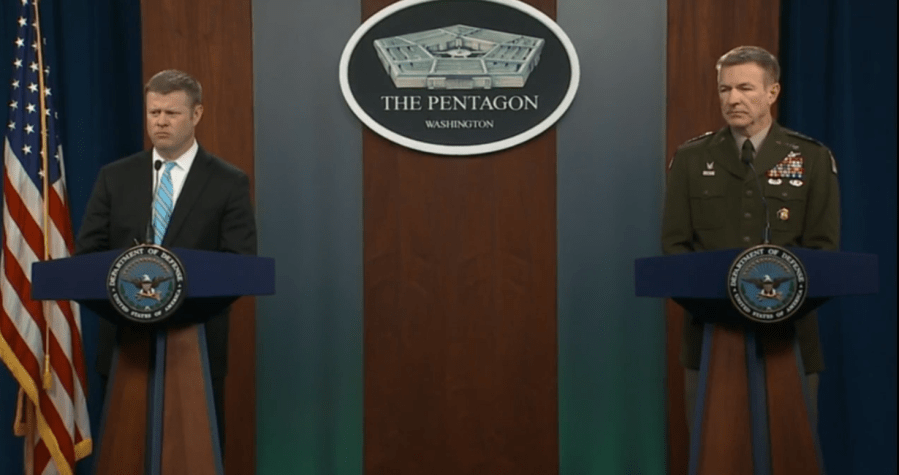 The Latest on the coronavirus pandemic. The new coronavirus causes mild or moderate symptoms for most people. For some, especially older adults and people with existing health problems, it can cause more severe illness or death.

TOP OF THE HOUR:

— United Kingdom to stay on lockdown for at least three more weeks.

LONDON — The British government says a nationwide lockdown imposed to slow the spread of the new coronavirus will remain in place for at least three more weeks.

Foreign Secretary Dominic Raab says “any change to our social distancing measures now would risk a significant increase in the spread of the virus.”

The lockdown has been in place since March 23. Schools, pubs, restaurants and most shops are closed, and most people are allowed to leave home only for essential errands or exercise.

Medical officials say the outbreak in the U.K. is reaching its peak but it’s too early to loosen restrictions on daily life.

As of Thursday, nearly 14,000 people had died in U.K. hospitals after testing positive for coronavirus.

MOSCOW — Russian President Vladimir Putin has warned against attempts to blame China for failing to duly inform the rest of the world about the coronavirus outbreak.

In Thursday’s phone call with Chinese President Xi Jinping, Putin emphasized that “attempts to accuse China of failing to inform the global community about the emergence of dangerous infection are counterproductive.”

The Kremlin added that the Russian president gave a “high assessment of the continuous and efficient actions of the Chinese partners” that allowed the outbreak to be stabilized. It said both leaders voiced confidence that close cooperation between Moscow and Beijing will help overcome the outbreak.

China has strongly denied claims it delayed reporting on the virus outbreak in Wuhan late last year and underreported case numbers, worsening the impact on the U.S. and other countries. Beijing also rejected allegations that the coronavirus pandemic may have originated in a laboratory near Wuhan where contagious samples were being stored.

BERLIN — Almost two dozen countries have called for stronger international cooperation and solidarity in the fight against the coronavirus pandemic.

Foreign ministers from Germany, France, Italy, Canada, Spain, Mexico and 17 other nations issued a joint statement Thursday describing the outbreak and its consequences as “a wake-up call for multilateralism.”

The group said it backed a call by the U.N. for an immediate global ceasefire, expressed its support for humanitarian efforts in poor countries affected by the pandemic, and said it would “commit, on a voluntary basis, to provide resources” to the World Health Organization’s efforts to curb the outbreak.

Following a virtual meeting of the group, known as the Alliance for Multilateralism, German Foreign Minister Heiko Maas warned that U.S. moves to withdraw from the arena of international cooperation could boost those “who don’t share our values, the values of liberal democracy.”

Asked about President Donald Trump’s recent decision to cut funding for the WHO, Maas said Germany would welcome talks between the U.N. health agency and American officials “so that a way out of this situation can be sought.”

WASHINGTON — The U.S. Navy says six sailors from the crew of the USS Theodore Roosevelt are hospitalized for treatment of coronavirus symptoms.

That’s up from five on Wednesday and four on Tuesday. One of the six in is the intensive care unit with shortness of breath.

The total number of Roosevelt sailors who have tested positive for the coronavirus has risen to 655. Another 3,919 tested negative.

Six percent of crew members have not yet been tested.

UNITED NATIONS — The U.N. special envoy for Yemen says the threat of COVID-19 has galvanized peace efforts and he expects the country’s warring parties to adopt proposals for a nationwide cease-fire and peace talks “in the immediate future.”

Martin Griffiths told the U.N. Security Council that talks with the internationally recognized government, which is backed by a Saudi-led coalition, and Iranian-backed Houthi Shiite rebels “are making very good progress.”

The U.N. envoy says he is redoubling efforts to bridge outstanding differences before convening the parties at a meeting “where agreements will be tabled, confirmed, I hope, and published.”

Griffiths says the opportunity to end the five-year-old conflict has come amid military escalation on several fronts and the arrival of the coronavirus pandemic in Yemen, which threatens deeper and more widespread suffering in the Arab world’s poorest country.

He says it’s a timely moment for “the two parties to commit to silencing the guns and ending the conflict through a peaceful, political solution.”

Speaking on television, Putin says the festivities in Red Square would be held later this year.

The postponement followed Putin’s decision to put off a vote originally scheduled for this month on constitutional changes that would allow him to try to stay in office until 2036.

AMSTERDAM — Pride Amsterdam, the annual gay pride festival that draws huge crowds to the Dutch capital, has been cancelled this year due to the coronavirus.

Organizers say the 25th edition of the hugely popular event, that was scheduled for July 25-Aug. 2, will be held next year.

While it is unclear what restrictions may be in place in the Netherlands over the summer, the government is telling people to prepare for a “1.5-meter society” in which social distancing is the new normal.

BERLIN — Germany’s foreign minister says cutting funding for the World Health Organization is like “throwing the pilot out the plane.”

The comment comes days after U.S. President Donald Trump announced American payments to the Geneva-based body would stop because of its handling of the coronavirus pandemic.

Heiko Maas says the United Nations and its health agency are the “backbone” of the current fight against the outbreak and “it makes no sense at all to question the functioning and significance of the WHO now.”

GENEVA — Swiss authorities will lift restrictions aimed for the coronavirus over the next two months after a decline in cases in recent weeks.

Home and Health Minister Alain Berset told a news conference in the capital of Bern, “We want to go as fast as possible and as slow as necessary.”

The Federal Council, Switzerland’s seven-member executive, says the three-step process starts with the opening on April 27 of hospitals for non-urgent needs, medical and dental offices, hair salons and some stores.

On May 11, all other stores and public schools are to reopen, followed on June 8 by professional schools, institutes of higher learning and libraries and museums.

Berset says those openings will come with protection guidelines and the plan may change. Switzerland has 26,732 virus cases and 1,107 deaths.

LONDON — Britain has recorded another 861 coronavirus deaths, bringing the total to 13,729.

The figure released daily by the government underestimates the actual toll because it only includes deaths in hospitals and not nursing homes or other settings.

The increase is 100 more deaths than the 761 reported Wednesday. It’s below the largest daily increase of 980, recorded last week.

The number of deaths each day is starting to fall in Italy, Spain and France, which were hit by the pandemic earlier than Britain.

U.K. health officials say it’s too soon to say whether the outbreak in Britain has reached its peak.

ROME — Relatives of residents in Italy’s largest nursing home are demanding information about the high number of deaths and reports that medical staff were prohibited from using protective gear for the coronavirus.

A Facebook group, the Committee for Justice and Truth for Victims of Trivulzio, is gathering testimony and information from relatives who are considering class action legal offensive against the Pio Albergo Trivulzio home in Milan, which is governed by local and regional authorities.

At least 143 people have died in the 1,000-bed home since the beginning of March. Prosecutors have opened an investigation into the facility and more than a dozen others around Italy.

The Trivulzio home has said it followed all security protocols and is cooperating with investigators.

LONDON — Prince William has praised the “selfless commitment” of doctors and nurses while opening a new field hospital in Birmingham, England.

The 500-bed Nightingale Hospital was built inside an exhibition center in just eight days. It will take patients recovering from the coronavirus, freeing up hospitals to care for the most critically ill. It has a mortuary and can increase capacity to take up to 4,000 patients.

The field hospital is the second of seven such temporary facilities to open, after the first became operational at London’s ExCel center.

Speaking by video link to about 50 health care workers and military staff, William said: “The building you are standing in is yet another example of how people across the country have risen to this unprecedented challenge.”

MOSCOW — Russian officials say the first coronavirus contagion has been registered at the spaceflight training facility outside Moscow.

The Star City serves as the main hub for training of U.S., Russian and other crew of the International Space Station.

The newest crew consisting of NASA’s Chris Cassidy and Russians Anatoly Ivanishin and Ivan Vagner arrived at the orbiting lab a week ago. Cassidy said before the blastoff that he and his crewmates had been in “a very strict quarantine” for a month before the flight and were feeling good.

LONDON — British regulators have approved the first newly adapted ventilator design from the consortium seeking to quickly build the devices.

The Penlon Prima ES202 has been authorized by the Medicines and Healthcare products Regulatory Agency. This model will help COVID-19 patients, who need their lungs cleared of fluid more often.

The government has ordered 15,000 of the devices. The first 40 are being sent to the military logistics hub in Donnington, southeast England, for distribution to the National Health Service on Thursday.

More than 10,000 ventilators are currently available and the government has some 2,000 on order from existing suppliers. Hundreds are expected to be built over the next week.

But Minister Constantinos Petrides says it will depend on how well people stick to a strict stay-at-home order that includes a night-time curfew in force until April 30.

Cyprus has 715 confirmed coronavirus cases and 29 deaths related to the virus.

The Parliament passed the laws with fines or imprisonment up to six months for violating the curfew hours.

Prime Minister Edi Rama says the amendments are needed. The virus has infected 518 Albanians and killed 26.

Trump said Wednesday the U.S. was ready to send ventilators to Russia, saying “they’re having a hard time in Moscow. We’re going to help them.” He added the U.S. also stands ready to provide ventilators to other countries, including Italy, Spain and France.

Russia has registered 27,938 coronavirus cases and 232 deaths. Officials have scrambled to secure ventilators and other essential supplies amid an exponential growth in infections.

Earlier this month, Russia sent a planeload of medical supplies, including ventilators to the United States. Moscow says the U.S. paid for half of the medical supplies, while the other half was sponsored by Russia’s state investment fund.

Estonian health officials have said an Italian volleyball team from Milan playing international Challenge Cup games on the island most likely brought the virus to Saaremaa, where some of Estonia’s first COVID-19 cases were recorded in early March.

Interior Minister Mart Helme, chairman of the nationalist Estonian Conservative People’s Party, says in an interview with the Estonian broadcaster Kanal 2 that “someone should take responsibility.”

The island is under lockdown, the first time since Estonia’s nearly fifty-year Soviet occupation ended in 1991.