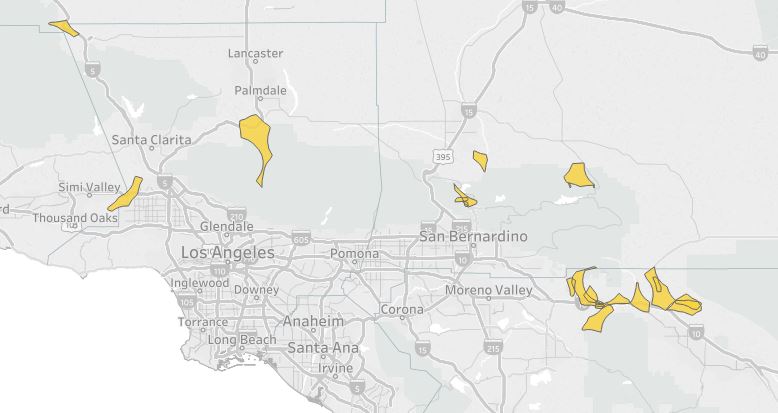 Southern California Edison is now considering shutting off power due to the high fire danger in areas that serve almost 33,600 customers in eight counties, the utility said Thursday, Oct. 17.

That includes about 4,200 customers in Los Angeles County (in the Acton and Chatsworth areas), 3,900 customers in San Bernardino County (around Big Bear Lake, Hesperia and the Lucerne Valley) and 2,700 customers in Riverside County (from the Banning area to North Palm Springs). No outages in Orange County were under consideration as of 4 p.m. Thursday. (See the full list below.)

Only a few small areas have actually had power shut off so far. Edison said 132 of its customers near Mammoth Lake in Mono County have been without electricity since 10 p.m. Wednesday, and another 65 in the Weldon, Onyx and Canebrake areas of Kern County lost power about 2 p.m. Thursday.

Edison — like the major utility in Northern California, Pacific Gas & Electric — is using a strategy called public safety power shutoffs to try to reduce the threat of wildfires by de-energizing power equipment in areas affected by strong winds. During a Santa Ana wind event last week, thousands of SoCal Edison customers lost power, while PG&E at one point blacked out more than a million of its customers.

An Edison spokesman said Thursday that there was no firm estimate for how long this round of power shutoff considerations might continue — it all depends on the weather, and when the winds die down. He noted that there are lots of microclimates across Southern California, so some areas may be out of danger sooner than others.

Temps a touch below average today with gusty winds for the mountains and deserts through Friday morning. Secure any loose objects and be careful if traveling ? #cawx #windywx pic.twitter.com/99XI8XlB6G

According to the National Weather Service, gusty winds were developing Thursday afternoon across Southern California, with the mountains and deserts most affected. Gusts had already hit 40 mph in a few wind-prone areas as of 2 p.m., the weather service said.

In Los Angeles County, forecasters were expecting the winds to peak late Thursday and into early Friday, weaken a little bit on Friday, then have a second peak Saturday and Sunday.

In Riverside and San Bernardino counties, the winds were expected to start to weaken late Thursday, pick back up Friday morning for the southwestern side of the San Bernardino Mountains and below the Cajon Pass, then settle down again before strengthening once more late Sunday and early Monday.

A number of wind advisories were in effect Thursday, with the weather service warning that gusts could hit 50 mph in the Antelope Valley and western Joshua Tree National Park,  45 mph in the Santa Clarita Valley and the mountains of Los Angeles and Ventura counties, and 40 mph in the western Mojave Desert and Morongo Basin. Other locations are likely to come under advisories in the coming days, forecasters said.

Here is the full list of areas Edison was considering power shutoffs as of 4 p.m. Thursday:

Inyo County: Unincorporated areas including Aspendell and near Bishop including Round Valley.

Edison officials say they’re trying to notify customers two days in advance if the weather forecast is showing that they might be affected by a purposeful outage. If conditions worsen to the point that power does have to be cut off, Edison says it will notify customers then too — and again once power is restored after the weather improves and crews have made sure it’s safe to turn the system back on.

They’re advising people to plan ahead. Tips are available at sce.com/outage-center/preparing-for-outages.