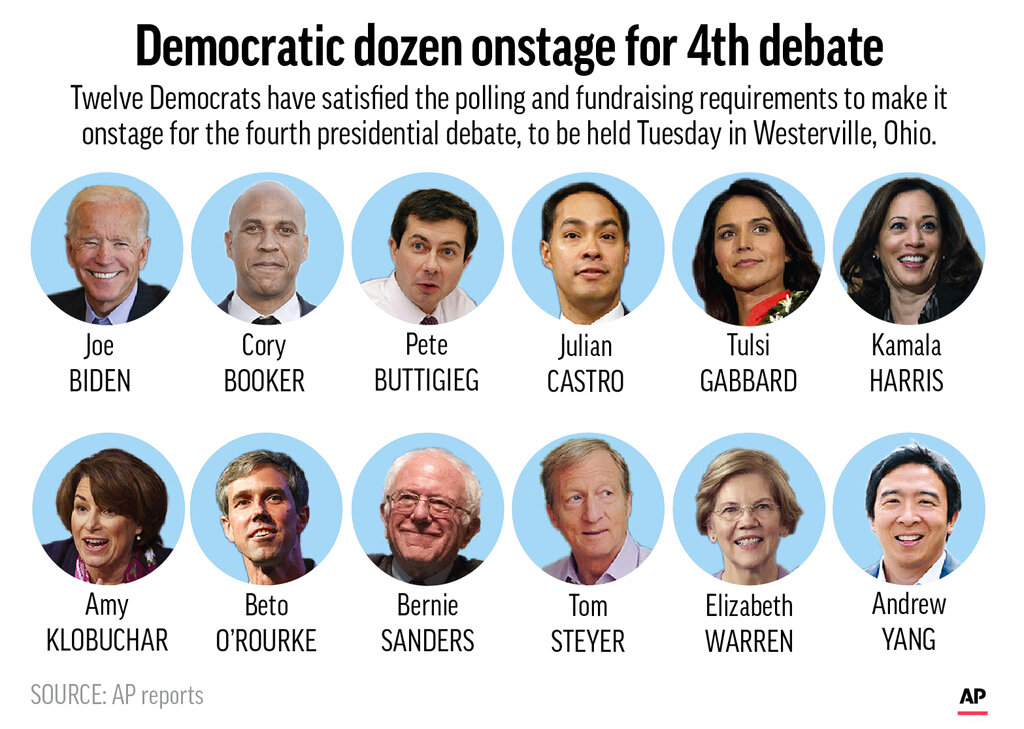 The Democratic presidential debate being held tonight — Tuesday, Oct. 15, 2019 — in a suburb near Ohio’s capital will bring back a candidate who has been absent from the stage for a while and introduce one who has never before been seen on the party’s debate lineup.

Hawaii Rep. Tulsi Gabbard failed to qualify for the September debate but will be back on stage tonight after meeting the Democratic National Committee’s qualifications:

Also making that cut will be first-time presidential debater Tom Steyer of California. The billionaire hedge fund founder is known for his large contributions to environmental causes and political campaigns.

Along with those two will be the 10 candidates you would expect to see on the stage at Otterbein University in Westerville, Ohio, listed alphabetically:

Tonight’s debate from 5 to 8 p.m. Pacific time is sponsored by the New York Times and CNN and will be carried on the cable network. The moderators are CNN anchors Erin Burnett and Anderson Cooper, and New York Times editor Marc Lacey.

There are many streaming options, and the debate will air on broadcast radio.

In addition to CNN, the debate will air on CNN International and CNN en Español.

CNN.com and NYTimes.com will stream the debate live. That feed will also be available on many CNN Facebook pages and via CNN and the New York Times’ mobile and video-streaming platforms, including both outlets’ iOS and Android apps, and CNN’s Roku, Apple TV, Amazon Fire, Chromecast and Android TV apps.

Debate audio will also be available to stations in the Westwood One Radio Network.

National Public Radio is carrying the debate. Stations in the Los Angeles market include KCRW-FM (89.9) and KPCC-FM (89.3).

Both stations will offer audio streams at https://scpr.org and https://www.kcrw.com.

Amazon Alexa devices will play audio of the debate.