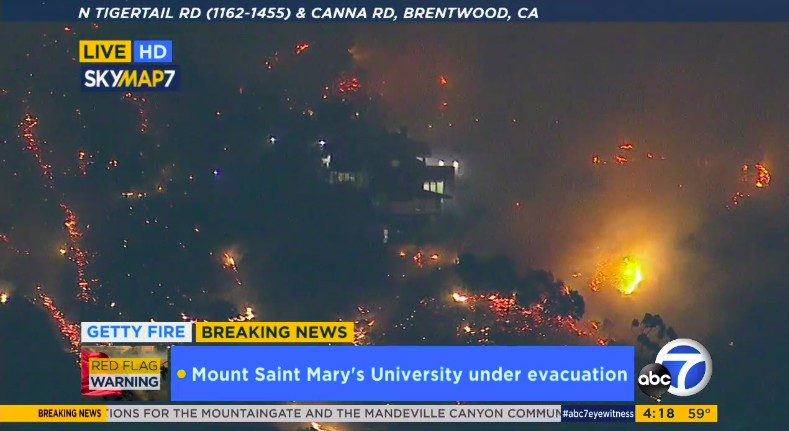 LOS ANGELES — Los Angeles city firefighters battled a blaze early Monday that started next to the 405 Freeway and Getty Center Drive, prompting evacuation orders and closing the freeway to traffic.

A witness notified the California Highway Patrol at 1:32 a.m. of a fire starting on the hillside close to the freeway with a possible power line on fire, the CHP reported. The CHP shut down northbound and southbound 405 Freeway lanes and all offramps from Sepulveda to Sunset boulevards on the northbound side.

MAP: This map shows mandatory and voluntary evacuation areas for the Getty fire

Video of the fire posted on Twitter showed a long ridge of flames on the hill near the freeway.

At around 2:45 a.m., the Los Angeles Fire Department sent L.A. residents messages on their cell phones, accompanied by what some described as very loud buzzing noises. It said: “Emergency Alert. Prepare to evacuate due to fire near the Getty going W. More info: lafd.org/alerts .” A subsequent message included orders to actually evacuate.

#GettyFire Evacuation Warning issued for the area: Mullholland down to Sunset, Topanga Canyon to Mandeville Canyon For a map of the zones, please visit https://t.co/ta4XvQvrGy #LAFD

The fire department ordered mandatory evacuations from the southbound 405 Freeway to Mandeville Canyon and ordered students to evacuate from Mount Saint Mary’s University at 12001 Chalon Road. Evacuations were also ordered for 200 people in a care facility next door.

An evacuation center was soon open at the Westwood Recreation Center at 1350 S. Sepulveda Blvd., near Wilshire Boulevard.

“This is a very dynamic situation due to high winds and information is quickly developing. Stay vigilant,” LAFD spokeswoman Margaret Stewart wrote on Twitter.