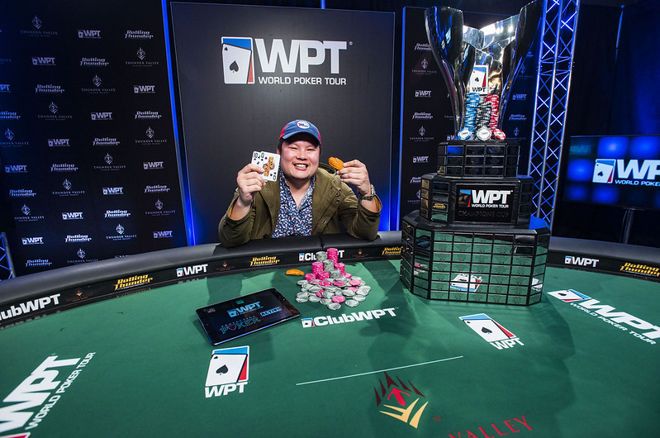 Tony Tran added his name to the World Poker Tour Champions Cup for the second time as he took down $5,000 WPT Rolling Thunder on Tuesday for $264,270 plus a $15,000 seat to the WPT Tournament of Champions.

Just like when he won WPT bestbet Bounty Scramble in 2018, Tran had to come back from being short-stacked to posing for the winner’s photo. He denied Erkut Yilmaz from winning back-to-back WPT Rolling Thunder titles in topping the field of 250.

Also on the WPT front, the WPT L.A. Poker Classic reached a final table last week, with the likes of Matas Cimbolas and Upeshka De Silva represented when the TV table convenes in Las Vegas.

The second leg of the California Swing, WPT Rolling Thunder built a prize pool over $1.1 million. There would be 32 places paid, with Cimbolas, Harrison Gimbel, Justin Liberto, and the red-hot Farid Jattin among those getting paid out but busting before the final table.

Defending champ Yilmaz spent some time at the unofficial final table with the lead, according to the live updates, but Kevin Rabichow surpassed him by the time he eliminated Casey McCarrel in seventh to force bagging for the final day. Meanwhile Tran was tied with Shankar Pillai at the bottom of the counts with 44 big blinds.

Those two short stacks would clash for the first elimination 41 hands into the final table, when Pillai shoved just under 20 big blinds with pocket sevens over a Tran raise and a Yilmaz call, only to run into Tran’s kings. A seven-free board boosted Tran a little south of 50 big blinds.

Tran then found a huge double to get within striking distance of the lead when he flatted an open with queens and Yilmaz squeezed with jacks. Yilmaz called Tran’s back-raise shove and was dead on the turn when a queen hit the board, sending about 1 million over at 20,000/40,000/40,000.

Yilmaz’s repeat bid then ended when he lost a race to Schwartz before Tran took his last few big blinds.

Rabichow had a sizable chip lead four-handed as he took control of almost half of the total chips, however it would be the short stacks Schwartz and Tran who got heads up, outlasting Rabichow and Robert Heidorn.

Both Tran and Schwartz doubled up, and Rabichow slid down to the short stack. Eventually, he shoved the button with

and couldn’t overcome the

of Tran. Heidorn also shoved on the button and ran into a big hand of Tran, deuces into tens this time.

Tran was up about 4-to-1 on Schwartz, who was at his sixth WPT final table. Schwartz got cooking early as he doubled up to 50 big blinds when Tran check-raised all in with

However, the comeback bid ended after less than 30 hands as Schwartz got short and shoved with

over Tran’s raise. Tran called with

and flopped a straight to secure his second WPT title and deny Schwartz his first.

A week prior to WPT Rolling Thunder, the LAPC reached the conclusion of the California-based portion of its $10,000 Main Event.

It drew 490 players for a prize pool over $4.7 million, with $1,015,000 up for grabs at the top, some of that reportedly kicked in by Commerce to round out the number to seven figures in cash before the Tournament of Champions seat.

A number of notables would cash among the 63 paid places, including Barry Greenstein, Chance Kornuth, Ali Imsirovic and Dylan Linde.

On Day 5 of the event, 11 players returned with a plan to play to a televised final table of six. The loaded field features Isaac Baron atop the counts, but the long-time tournament crusher would go down 11th in a disappointing run of lost all-in pots and failed bluffs.

Former WPT champs Kevin Eyster and Daniel Strelitz, who once won this very event, also made Day 5 but busted in 10th and eighth, respectively.

In the end, a characteristically tough final table emerged. Here’s how the remaining six stack up:

They’ll play for the mill-ball on April 2 at the HyperX Esports Arena Las Vegas.