“Despicable”: Student removes every American flag from 9/11 memorial in “protest” 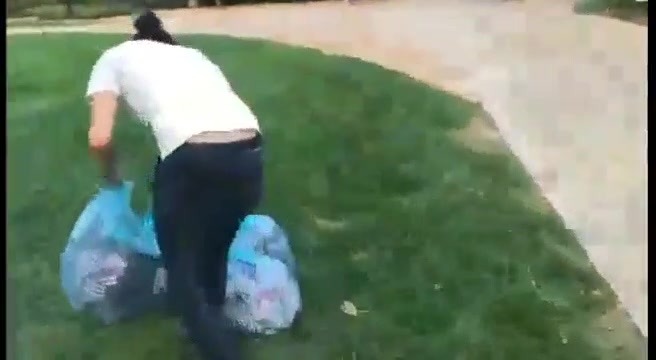 ST. LOUIS, Mo. – A student senator at Washington University in St. Louis is in an uncomfortable spotlight after removing every single flag from a 9/11 memorial set up by students of the school.

In a video that’s now gone viral, a sophomore from the university saw the student on the site of the memorial, where a Republican group of students had put 2,977 flags, one for each victim of the terrorist attacks.

Nathanial Hope, one of the students with Young America’s Foundation who helped set up the memorial, saw Fadel Alkinali with the flags in several plastic bags when he decided to start recording.

According to the student newspaper, Alkinali serves as the chairman of the school’s student senate finance committee.

Alkinali, whose social media pages have since been taken down, seemed agitated at being filmed by Hope as he was carrying off the bags.

In a statement provided to the university’s campus newspaper, Alkinali said he planned to, “place the bags of flags on Mudd field, along with various statistics…explaining the human cost of 9/11 in the past 20 years.”

He also maintains that he did nothing criminal, nor violated any policy of the university. Alkinali also says he has been verbally and physically harassed by Washington University students and officers, who he “plans to report”.

Alkinali went on in his statement to say that the full intention of his protest was not made clear in the video that was posted, adding, “Since 9/11, Islamophobic hate crimes have been higher than they ever were before,” and, “over 900,000 people have been killed because of the wars the United States has propagated.”

“Any memorial of 9/11 that does not contend with these facts is not only incomplete,” Alkinali continued, “but it also amplifies pro-imperialist sentiment and actively disrespects those who have died because of American Invasion.”

The school released a statement saying it is disappointed to hear about the 9/11 disruption and condemns Alkilani’s actions, but no disciplinary measures have been taken.

“We were disappointed to learn about the disruption to the 9/11 display on Mudd Field. We condemn the interference with the expression of support by the College Republicans for the victims of the national tragedy that took place 20 years ago today. The actions surrounding this incident were not on behalf of the university or a university-sponsored organization. We value freedom of expression in all forms and will work to ensure that all students are able to express their points of view through appropriate channels without disrupting the rights of others to show support for causes they care about. This is a critical component of our core values and we are committed to facilitating free speech on our campus.”

The university’s student union also posted a statement on Instagram, calling the 9/11 memorial vandal an “activist” who was engaging in “political protest.”

Alkinali had stated he was not intending on throwing the flags, representing lives lost on 9/11, away. However, the morning after the video, a student found flags in a trash can near the memorial site.

The situation has caused a large amount of tension within the school, as Muslim students have expressed fear for their safety following Islamophobic online reactions to the video, while College Republicans have called for Alkinali’s expulsion.