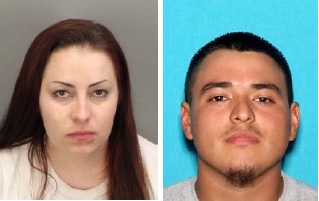 Banning police are hunting for two people wanted for questioning in connection with a shooting death in that city.

Officers responding to a report of shots fired in the 1200 block of Wyte Way about 10:30 p.m. on Oct. 7 found Mark Anthony Fisher, 25, suffering from a gunshot wound, a news release said. Fisher, a Banning resident, was taken to Desert Regional Medical Center in Palm Springs, where he died at 11:47 p.m.

Police described the wanted people as persons of interest.

One is Abel Edward Martinez Jr., 23, of Beaumont. He is described as 5-foot-5 and 180 pounds with black hair and brown eyes. Police consider him armed and dangerous. Martinez has convictions for possession of a controlled substance and possession of an illegal switchblade, according to Superior Court records. There is a warrant out for his arrest for violating a court order in a domestic violence case.

The second is Ashley Marie Phillips, 27, of Banning. She is described as 5-foot-1 and 140 pounds with brown hair and brown eyes. Phillips has convictions for felony evading, driving under the influence, receiving a stolen vehicle, grand theft auto, hit and run, burglary and battery, court records show.

Police ask anyone with information on their whereabouts to call 911.