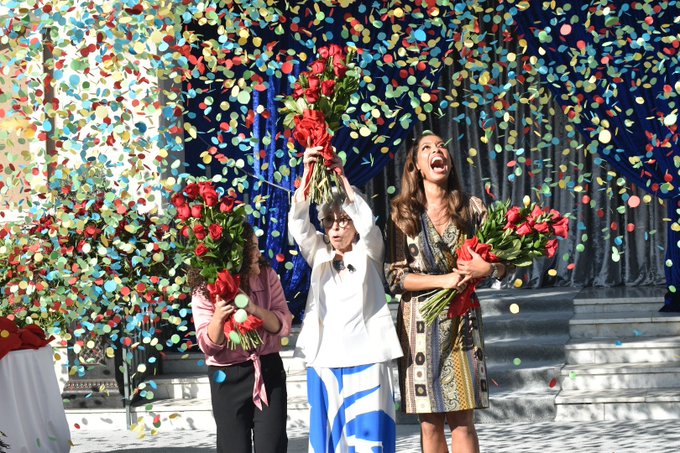 Moreno is the grande dame of the trio., having won an Emmy, Grammy, Oscar and Tony.

Moreno recalled “dancing for grandpa” as a young girl. All she wanted was to be a movie star. “I am so grateful to the Rose Parade, but especially for Laura for coming up with this concept.”

She was referencing Tournament President Laura Farber, the first Latina to hold the honor in the parade’s 130-year history. She and her husband chose the parade’s theme together: “the Power of Hope.”

Hernandez, the youngest of the three at 19, won team gold as part of the  “Final Five” at the 2016 Summer Olympics. Torres is known for many television roles, including “Westworld,” “The Shield” and “Xena: Warrior Princess.”

“This means the world to me, and I used to watch the Rose parade as a little kid, with my family, and now I get to be a part of it,” Hernandez, said in her speech in front of the Tournament House.

She is also a silver medalist on the balance beam in 2016. That same year, Hernandez won Season 23 of “Dancing with the Stars” with partner Val Chmerkovskiy.

Last week, the Tournament offered a couple of hints at the selection, calling the selection in a news release it is a “triple threat with Caribbean roots, this year’s medal and award-winning grand marshal.”

As parade watchers scrambled to decipher the clues, no one had guessed triple threat was meant to be taken quite literally.