XRP had been the highest transacted cryptocurrency in the past 24 hours, leaving Bitcoin and Ethereum far behind in the competition. Whale Alert, the tracker of large cryptocurrency transactions alerted the community of a large XRP movement.

On July 20, 9,999,000 XRP was transferred from an unknown wallet to Bitstamp exchange, a heavy number for XRP. The sender’s wallet address was reported to be rHVrdBcSU3Rdj4j2RfspN6mLxUu86p5fC1 and the receiver’s wallet address was rDsbeomae4FXwgQTJp9Rs64Qg9vDiTCdBv, identified to be of the Bitstamp exchange. The hash rate for the transaction was
8B468EFF8DD22C6D0763719300D106AFD80EC1EC1B4CFC873245C06AE22D1612 and following were the transaction details: 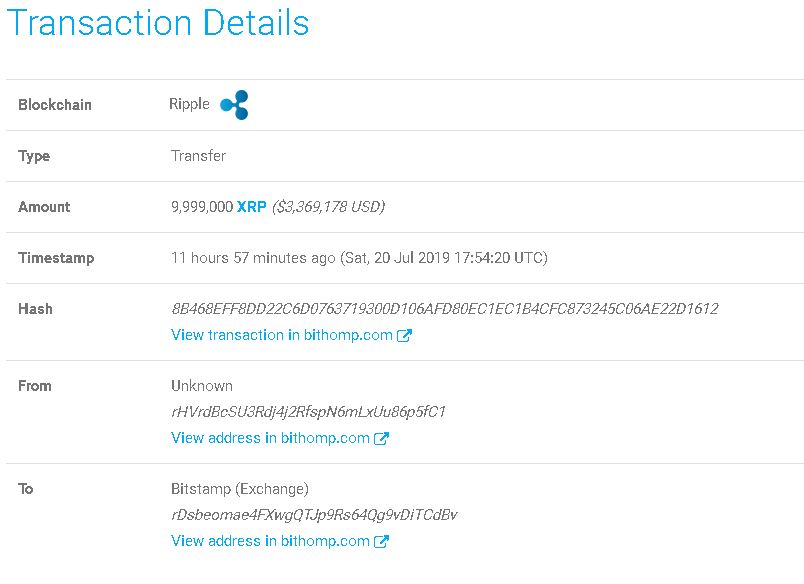 The result of this transaction was soon seen in the market as XRP’s price rose for the following three hours by almost 2.60%.

After looking into the sender’s wallet it was found that it was activated in November of 2018 with 100 XRP and the current wallet balance stands at 20.98 XRP. Before this transaction, the sender had sent 1,000 XRP to Bitstamp. However, when the receiving history for the wallet was checked, it can be seen that the wallet received 10 million XRP from the wallet address  ra3NQBSJs7j5SQq1ems2NC3fvSkYHJW2VU.

The wallet address  ra3NQBSJs7j5SQq1ems2NC3fvSkYHJW2VU has repeatedly transferred a sum of 10 million XRP to the sender’s wallet, after which the XRPs were moved to Bitstamp in two different transactions.

The market cap has been reported to be $14.168 billion with a growth of 5.29% over the day. In the past week, the coin has tried to keep pace with the rest of the market as it reported 0.67% growth. However, the bears were not far away from XRP market as the coin tumbled by 0.03% within an hour (at press time).