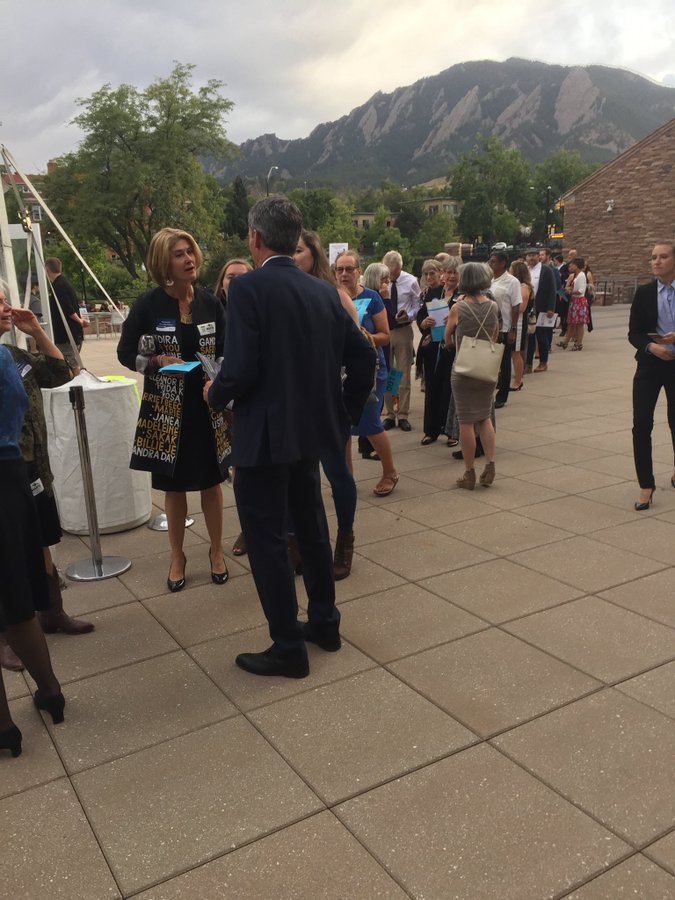 Looking at the traffic Saturday afternoon at the University of Colorado, one might have guessed a rock star had touched down in Boulder — and they wouldn’t be totally wrong.

The excitement, hours before her speech would even begin, was palpable outside of the ballroom.

“I’m looking forward to hearing from a young, intelligent female change-maker,” said Wendy Rochman, of Boulder. “I want to see some of her tactics and perhaps use them in my conversations.”

Rochman waited outside with friends for the doors to the Glenn Miller Ballroom to open at 6 p.m.

For Geri Mitchell-Brown, of Boulder, Saturday night would mark the second time she had come out to see the congresswoman. Mitchell-Brown and her daughter, Tessa Brown, 14, saw Ocasio-Cortez earlier in the day when she spoke before a packed house at Boulder High School.

“It’s really important to me that she sees young, powerful women, who are change makers, who aren’t afraid to speak up and speak out,” Mitchell-Brown said. “Joe Neguse said AOC is fearless. We have to be fearless, if we are to change things for the way that aligns with my values. I don’t see things in this country going in that direction and that makes me pretty mad.”

Mitchell-Brown cited the Green New Deal, legislation Ocasio-Cortez crafted alongside Sen. Edward Markey D-Mass., to reform the energy and economy sectors to be less harmful to the environment.

“The whole issue around climate is it is based around and unsustainable, profit-based economy,” Mitchell-Brown said. “Her (AOC’s) policy is rooted in science and economy.”

While some have criticized the Green New Deal for being too costly and lofty in its ambitions to initiate major climate reform in a 10-year time frame, many who packed the house Saturday said they were eager to hear more. Green stickers bearing the plan’s name were passed around and worn by many Saturday.

The sold-out event drew more than 1,000 people to the ballroom, the largest crowd ever to attend one of the county party’s Truman dinners. Before they were all snapped up, tickets for the event were highly coveted. The Lisa Smith campaign team, which said they secured two tickets, offered to dole out the tickets to the first people to donate $400, which was to go to the Boulder County Democratic Party.

While media was not initially permitted to attend, the Boulder County Democratic Party sent out last minute invitations the evening before.

This story will be updated to reflect new developments Saturday.