Although Bitcoin ATMs are associated with significantly high transaction fees, they are also one of the easiest conversion methods, without the need for any crypto-exchange or third-party service provider. It has also become easier for travelers to convert their Bitcoin into fiat in foreign countries, where their choice of exchange or banking services are not available.

These Bitcoin ATMs are distributed in over 74 countries with over 551 operators. If we look at the distribution of these ATMs across different countries, despite regulatory hurdles, the US tops the list with the highest percentage of Bitcoin ATMs. The USA accounts for a whopping 62.3% of the total number of ATMs spread across 3,678 locations. Canada takes the second spot with 707 locations, followed by the UK with 274, Austria with 252, and Spain with 94. 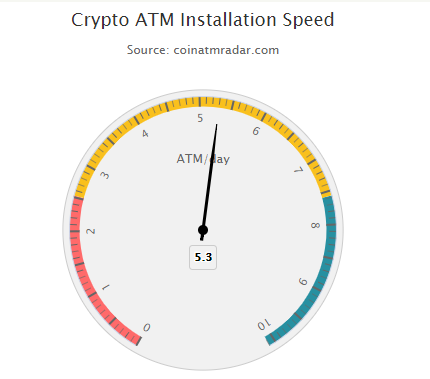 Another statistic from Coin ATM Radar shows a significant rise in the daily installation of Bitcoin ATMs across the globe, with a total of 5.3 ATMs is being installed every day. The increasing number of ATMs over the years in several countries is a clear indication that the demand for these ATMs is quite high.

Another interesting statistic highlighting the growth of Bitcoin ATMs, and by extension the popularity of cryptocurrencies, across the world is the fact that the number of these ATMs have surged by over 500% since September 2016. With more and more countries now openly showing an inclination to understand cryptocurrencies, these numbers will continue to rise.