While the cryptocurrency market’s rollercoaster ride comes as no surprise to its users, the ongoing correction streak, in tandem with U.S. government’s resistance, has fueled the depletion of the cumulative market capitalization.

It is in light of all these developments that Altcoin Magazine released its latest edition of the Altcoin Review, tracking the growth and fall of Bitcoin and altcoins over the past week. One of its key findings was the fact that the market capitalization of the cryptocurrency market has recorded a fall of 11.5% since 12th July, with the market cap at $275 billion, at press time. 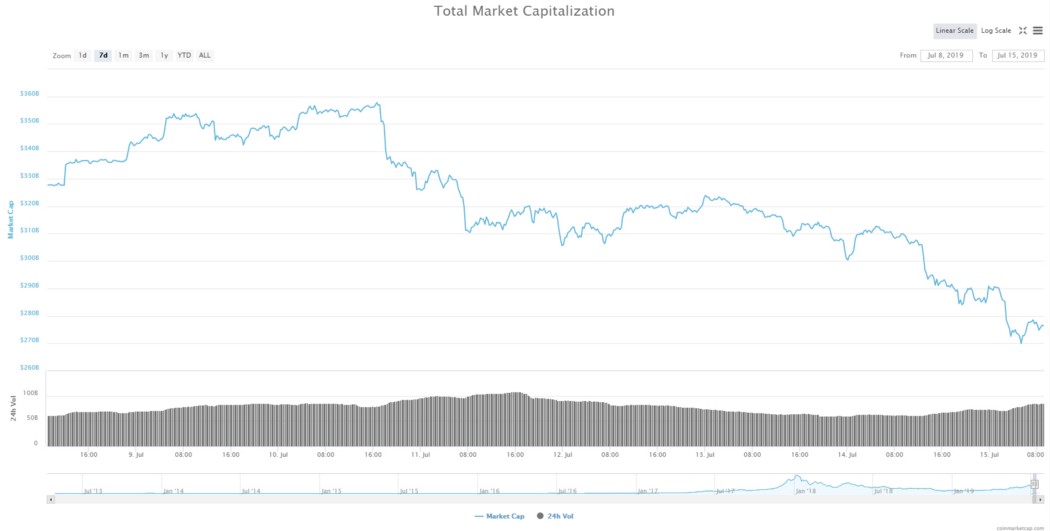 Displaying a pattern similar to the previous crypto-winter, the market is being led by Bitcoin which continues its second week into the drop. With market capitalization falling, value recovery weighs on the coin trading at around the $9,750 support mark.

As evidenced by the graph above, BTC’s movement showed signs of fitting the wide side range framework. Further, the added pressure of regulations and FOMO (fear of missing out) is expected to display interesting graph formations in uncertain market conditions.

The world’s leading altcoin, Ethereum, has followed suit after breaking its long-term support a month ago.

Contrary to its trading value, the ETH market experienced high trading volumes and aggressive sales, when compared to the market leader, BTC. According to experts, ETH’s slow fall has resulted in a cleansing effect, with only interested crypto-investors holding on. While Ethereum’s market is also uncertain, the formation of a key point is requisite to gaining a clearer picture of the market’s future.

Interestingly enough, XRP witnessed a slow pace to its drop. This is speculated to be driven by XRP’s mass adoption drives across the globe, driven by its parent company, Ripple and its collaborations. While hinting at relative stability, XRP passed below its $0.32 support line to be held up at $0.29, at press time.

Even as many cryptocurrencies continue to dip in value, trading volumes remain high and provide a brief respite.