Tether, the top stablecoin, maintained its vice grip on the stablecoin market, while competing fiat-pegged cryptocurrencies are experiencing steady growth. USD Coin [USDC] and TrueUSD [TUSD], the other top stablecoins, have however surged in recent months, owing to the Bitfinex-Tether episode.

According to a recent report by Diar, competing stablecoins have surged in the month of May in terms of spot trading volumes, amassing over $4 billion tokens on the blockchain. The trading volumes of the stablecoins over the past 5 months have already surged ahead of total fiat-pegged volumes in 2019. 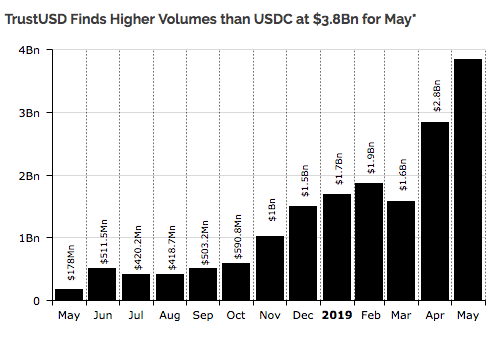 In May alone, the Coinbase and Circle-backed stablecoin, USDC, saw a massive 130 percent rise in trading volume, accounting for $3.6 billion, compared to its April sum of $1.6 billion. Launched back in October 2018 during the prolonged crypto-winter, the stablecoin’s trading volume from the first four months of its issuance is still dwarfed in comparison to its April 2019 figure.

Since the beginning of the year alone, the stablecoin grew by 41 percent, stated Diar. Trading volumes reciprocated, recording a 435 percent top-up. 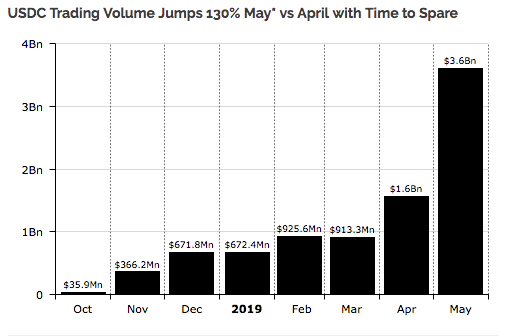 TrueUSD by TrustToken, the audit-friendly stablecoin, saw its volume increase by $1 billion from $2.8 billion in April to $3.8 billion in the current month, beating USDC’s trading volume by $200 million. Diar added,

“Notably, though, is that TUSD has a higher velocity marking it a favorite by traders as the stablecoin has 30% less in outstanding reserves than Centre’s USDC.”

Interestingly, the USDT-sans-stablecoin surge occurred as Tether experienced its first month-on-month decline in market share for the first time in 6 months. Holding 81.7 percent of the market in March, USDT’s market share declined to 78.9 percent of the total Bitcoin to stablecoin and fiat market.

May looks to paint a different tale for Tether, given the backlash its parent company is facing. Tether Limited also shares management with iFinex, the company that operates Bitfinex, which allegedly used USDT reserves to cover up its $850 million undisclosed losses.